My Embarrassing Inability to Distinguish Birds from Amphibians

I started birding on March 2, 1975, and by the end of May had amassed a lifelist of 40 species. By my standards in this millennium, that was a pretty pitiful showing, but I was proud of my total, which took a lot of time and effort for someone who needed two field guides and a recording to firmly identify the first bird on the list, a Black-capped Chickadee.

A full year later, with my lifelist all the way up to 125, I was getting cocky. At the very least, I was certain that I knew a bird sound when I heard one. That spring, I started hearing a simple and lovely whistled vocalization every evening before dark. I was taking ornithology, and prided myself on knowing that this wasn’t a song—it was the call note of some exciting bird or other. Frustratingly, the light level was always low when it started calling, and the sound seemed to come from only the very wettest areas. After at least a week of frustrating dead ends, I finally pulled out a pair of waders and a good, strong flashlight and searched for a couple of hours before, at last, I tracked down the singer—a one-inch tree frog called a spring peeper. It looked nothing like a bird. (You can hear some here along with an American Woodcock beeping.)

That I was incapable of telling a bird from a frog while I was still a beginner was distressing, but I learned from my mistake and have gone on to become a fairly respected birder. There was no way I could possibly confuse a bird with an amphibian in this millennium, right?

Apparently there was—and on the first day possible, 01-01-01. That was the day I took my first birding trip out of North America ever, to Costa Rica. The moment I stepped out of the airplane, I heard a sound like tiny silver hammers striking at diamonds. It was so beautiful that I was certain it was coming from a bird, but somehow, because of that beauty, I wasn't all that mortified when it turned out to be another very tiny, nondescript frog. The tink frog weighs a tenth of an ounce, about the same as a Ruby-throated Hummingbird, and could fit in a thimble. It emerges from its egg in a water-filled bromeliad as a fully-formed frog, without a tadpole stage. I’ve thrilled at its sound all four times I've visited Costa Rica now, but my trip there last month was the first time I ever not only made a recording but also saw and photographed one. It's quite tiny and nondescript, and sure enough, looks nothing like a bird. 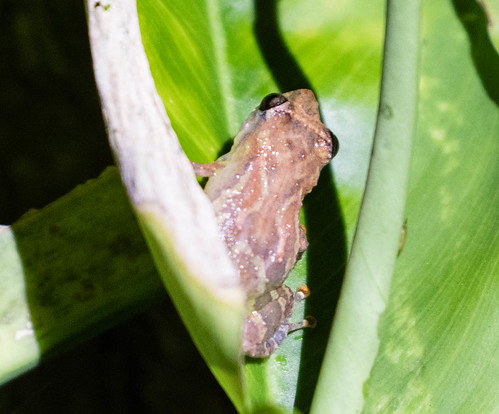 It's been 16 years since I mistook that first tink frog for a bird, and a full 41 years since I thought the spring peeper was a bird. After all the experience I've amassed over lo these many years, of course I can tell frogs from birds now, right?

Not quite. The first evening I was in Costa Rica last month—yes, July 16, 2017—I heard a lovely trilling call that I was certain had to come from one of the four species of screech-owls found in Costa Rica. A couple of us walked out to the area where the call was coming from, and quickly found the singers—a whole group of cane toads. This large species, also known as the giant toad, is native to mainland Central and South America, but has also been introduced in Australia, the Caribbean, and Florida. Cane toad tadpoles are very toxic, and adults have large poison glands. They're too big to fit in a teacup and weigh almost three pounds—more than eight of the screech-owls that also make trilling calls; the owls may look bigger but are feather weights. And again, cane toads look nothing like birds.

Anyway, I brought my little digital recorder, which has two microphones set at right angles, and got this stereo recording. I also made a short video. 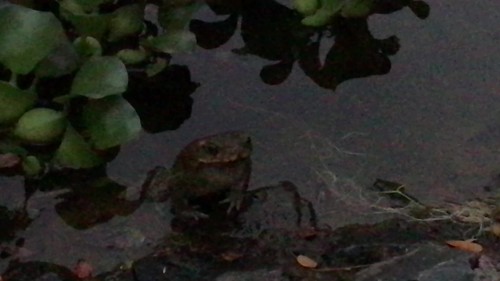 This was the first time I’ve been to Costa Rica when I’ve actually seen, and photographed, the iconic red-eyed tree frog. Our group took a night hike through a wetland outside the Arenal Observatory Lodge, and I got photos of two different individuals, so I got to see how the blue-and-yellow color pattern on their sides varies. I was utterly charmed seeing these guys, such a visual treat, with their vivid primary colors, their oddly long, skinny legs, and their oversized sticky toes, holding them fast to glistening wet leaves. 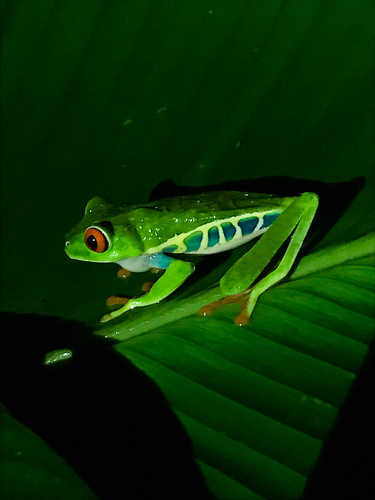 That night we saw a variety of other species, including the loquacious tree frog and hourglass tree frog. And near the end of the trip, one early morning we came upon two green-and-black poison dart frogs engaged in some kind of territorial battle. They leaped at each other a few times, and then the victor chased the other one away. The light was still very low and I didn’t have time to switch my camera to video before the fight was already over, but I did get one photo of the two of them after they separated, and a few photos of the winner. 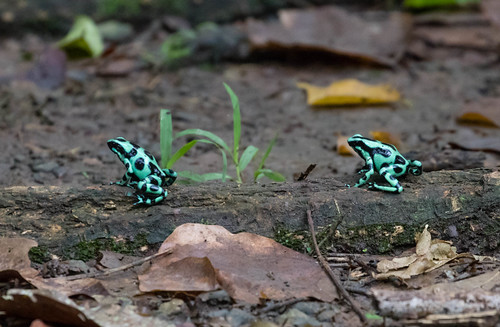 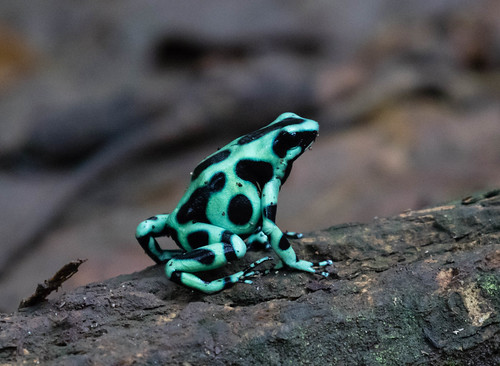 On this trip I also finally got photos of the “blue jeans frog”—Costa Rica’s color-type of the strawberry poison-dart frog. 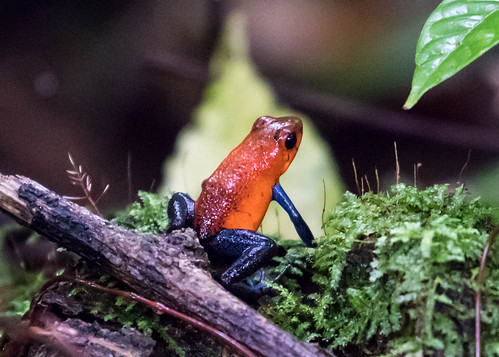 I fully appreciate that the amphibians I was so thrilled to see and hear are among the creatures most vulnerable to climate change—indeed, I heard far fewer tink frogs in far fewer places on this trip than previous ones. As usual when I go on a trip, I try to make up for the natural resources travel squanders by reducing my everyday carbon footprint even more than usual, and I contribute as much as I can to a tropical reforestation project, because tropical deforestation contributes even more to climate change than does travel, including air travel. We live in complicated times, and all any of us can do is our best. If some of those complications involve distinguishing birds from frogs, well, again, all I can do is my best.