When I was living in Madison, Wisconsin, in the mid-70s, George Harrison came to speak at a Madison Audubon meeting. This, of course, was George H. Harrison, there to speak about his new book, Roger Tory Peterson’s Dozen Birding Hot Spots, not George Harrison the Beatle—had that one written a book about a magical mystery tour to see a lot of birds, he certainly would have titled it Blue Jay Way.

But this George Harrison had traveled to twelve of Roger Tory Peterson’s favorite places in North America, from southeastern Arizona to the Gaspé Peninsula in Quebec, all in a single year.  It was a cool adventure for its time, and his descriptions of the places he birded that year inspired my own yearning to visit them. The very next year, when Russ had a meeting in Corpus Christi, Texas, I tagged along to bird in many of the South Texas sites mentioned in the book. And the most thrilling one of all was the Santa Ana National Wildlife Refuge.

As Harrison describes this wonderful place:


We were still in the United States, but as far as the trees, birds, mammals and climate were concerned, we were in Mexico. Only a curve in the political boundaries put this typically Mexican landscape in our country.

This small remnant of subtropical forest located 45 miles west of Brownsville, Texas, is often referred to as the “gem of the National Wildlife Refuge system.” Because of its strategic location along the Rio Grande, this tiny 2,000-acre refuge is famous for harboring many birds usually seen only south of the border. Many Mexican species reach their northern limits at Santa Ana.

Russ and I birded several places in south Texas before we made it to Santa Ana, yet I added 8 lifers there, including my very first avocets and stilts, Cinnamon Teal, and Vermilion Flycatcher. Chachalacas were everywhere underfoot, and skulking White-eyed Vireos and Olive Sparrows came out in the open long enough for me to finally add them to my lifelist. Altamira Orioles, then called Lichtenstein’s Orioles, weren’t singing in winter, but their brilliant oranges stood out from the muted shades louder than song. My most vivid visual memory is of the silvery-green Spanish moss-laden trees accented with the mossier shades of Green Jays.

Russ found Santa Ana as wonderful as I did, and birds weren’t the only highlight. In addition to the fact that this refuge is a permanent or temporary home for over 400 species of birds, more than half of all of the native butterflies of the United States have been found there as well.

In 2002, when I was an invited speaker at the Lower Rio Grande Valley Birding Festival centered in Harlingen, two of my conservation heroes, Paul Baicich and Wayne Peterson, took me birding at Santa Ana. In 2013, I saw two species at Santa Ana that I saw nowhere else during my Conservation Big Year—Rose-throated Becard and a family group of Groove-billed Anis that were also a milestone species for me—Number 500 for that year. At the refuge gift shop, I bought a painting of an ani to commemorate the occasion. 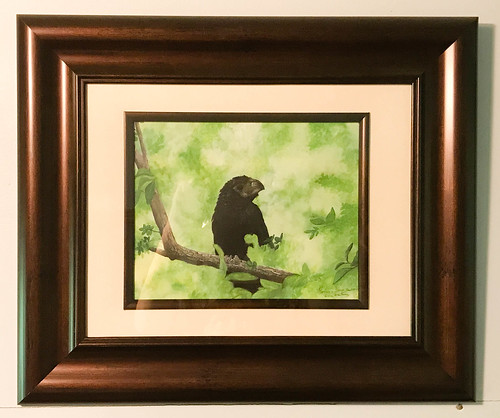 Just last week in Costa Rica, encounters with Groove-billed Anis stirred my treasured memories of Santa Ana. All my thoughts of this wonderful place have been lighthearted and beautiful—its being such an important part of the national wildlife refuge system gave me a sense of security that this was one bit of habitat I'd never have to worry about except as increasing human demands for water affect the entire Rio Grande Valley. Surely the refuge itself was securely and permanently protected.

But last week, at the same time I was thinking warm thoughts about Santa Ana from Costa Rica, the refuge was making national news up here. Most of the land along Texas’s border is in private hands, so the administration wants to jump start its ridiculous and obscenely expensive border wall in Texas by breaking ground at the Santa Ana National Wildlife Refuge. For the past six months, US Customs and Border Protection (CBP) has been quietly—indeed, secretly—preparing to build a nearly 3-mile border barrier right through the refuge, according to The Texas Observer. Construction on the wall was not expected to begin until January because Congress has yet to approve CBP’s budget, but last Thursday, the House approved a spending bill that contained $1.6 billion to build segments of the wall in Texas and California. Even if the Senate doesn’t approve it, CBP recently told a senior Fish and Wildlife Service official in Texas that the agency would shift funds to pay for the new segment out of its current budget, and construction is expected to begin soon.

According to the National Wildlife Refuge Association:

The proposed wall could span three miles through the refuge and consist of a concrete base, acting as a levee, and 18-foot high fencing on top, permanently altering the landscape to the detriment of iconic wildlife. If the wall were constructed as described it would eliminate migratory movements of mammals, which could include endangered ocelots, mountain lions, Sonoran pronghorn, foxes, and deer that cross the Rio Grande for food or shelter, and lead to genetic inbreeding and eventually species extinction. The concrete levee wall could also lead to increased flooding within the refuge, trapping and drowning wildlife that would be unable to escape.

Some reports conclude that the wall could block access to the refuge, cutting off the visitor’s center, located on the north side of the refuge, to the south side of the refuge, limiting public access and undermining efforts underway to connect people to nature and the great public-private partnerships facilitated by the U.S. Fish and Wildlife Service.

In the past seven months, so very many unprecedented assaults on individual rights and the environment have been coming from every direction that Americans are benumbed—it's impossible to keep track of it all. In the past week, the Army Corps of Engineers leveled trees and macheted through a swath of the National Butterfly Center, which scientists had purchased from farmers and restored with plant species vital to the survival of the threatened monarch butterfly. Now, only brown stubble remains. The wall constructed there and through Santa Ana will block the migration of thousands of land-based animals, cutting their territories in two.

These assaults on our treasured federal lands feel personal to me—especially on my beloved Santa Ana.

The Santa Ana National Wildlife Refuge was paid for in large part by Duck Stamp revenue. I don’t understand why hunting groups aren’t up in arms about the dangerous precedent this sets, much less about the loss of this specific jewel of the refuge system. Every single wildlife conservationist should be. The National Wildlife Refuge Association has posted about this on their blog, and provides information about what we can do.

I'll be speaking out against this assault on this treasure that was set aside for each and every one of us and our descendents. I expect hunters to fight just as strenuously against this obscene taking of a treasure they paid for to provide essential habitat for game birds.

To love is an active verb. Love demands that we take responsibility for the well-being of our loved ones, including wildlife and natural places. As Ella Wheeler Wilcox wrote in her 1914 poem, "To sin by silence, when we should protest/ Makes cowards out of men." If we don't stand up and be heard, we don't deserve the valuable treasures our predecessors saved for us.

Will we prevail? As John Adams said, "We cannot ensure success, but we can deserve it."