Preying mantises: too much of a good thing 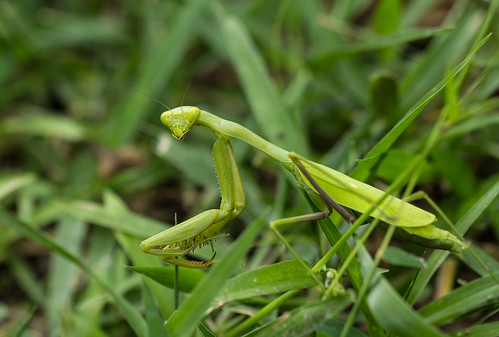 Whenever I read about the problems caused by House Sparrows, European Starlings, or Rock Pigeons, I wonder why we haven’t learned the lesson that introducing species virtually always works out badly for someone in the long run. From Burmese pythons in the Florida Everglades to the mosquitoes in Hawaii that decimated native humans and birds, invasive exotics cause all kinds of serious ecological problems, and often ones that affect human health or harm things we value.

Some introduced species turn out to be worse than others, and the impact of a single species often depends on the local habitat and wildlife community. House Sparrows that aren’t much trouble at all in big cities are a horrible scourge anywhere bluebirds live. Pigeons are a nuisance and, rarely, a public health menace for humans, but don’t seem to have much impact on wild birds except to provide food for urban Peregrine Falcons.

We usually think of introduced species as those from other continents, but wildlife introduced from one area of North America to another can become genuine problems, too. Yesterday I talked about the problems introduced Red Squirrels have caused for some non-migratory Red Crossbills—problems that had nothing to do with the squirrels actually devouring the birds. It turns out that another species introduced here and there, for the best of reasons, is outright devouring some of our most beloved birds.

Gardeners who want to control insect pests effectively while causing the least amount of ecological harm often purchase ladybugs or preying mantises to eat the pests. The gardeners of course feel virtuous about this, because this is a safe alternative to insecticides.

Unfortunately, a new study in The Wilson Journal of Ornithology suggests that releasing preying mantises and attracting hummingbirds are at dangerous cross-purposes. The authors reviewed 147 documented incidents of mantids capturing hummingbirds and a variety of small songbirds in 13 different countries, on all continents except Antarctica. In these attacks, 78 percent of the birds were killed and eaten by the mantids, 2 percent escaped on their own, and 18 percent were freed by humans.

More than 70 percent of the incidents happened in the United States, and most often to Ruby-throated Hummingbirds. They involved both native and non-native mantids. The researchers suggested caution in the use of large-sized mantids, particularly non-native mantids, in gardens for insect pest control.

I think that’s certainly prudent, especially in flower gardens that attract hummingbirds. Also, many of the attacks documented in the study took place at hummingbird feeders, so it seems wise for gardeners who do use mantises to skip the death traps in the form of feeders.
Three years ago I wrote a blog post about a new book with an entire chapter based on a ridiculous study from 1985 claiming that hummingbirds have no natural predators. There were plenty of documented cases of predation on them, some by preying mantises. Now it’s all too easy to see graphic proof of this on social media. Insecticides are a much greater problem for hummingbird individuals and populations than mantises are, but as fascinating and even cute as mantises are, I prefer letting my own flowers take their chances with the bugs. 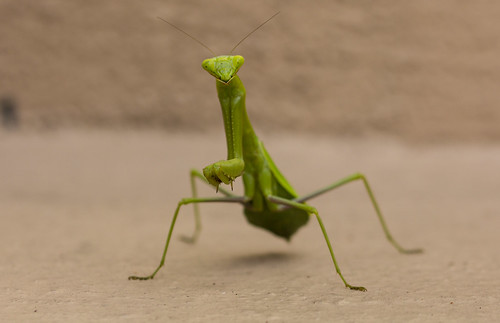