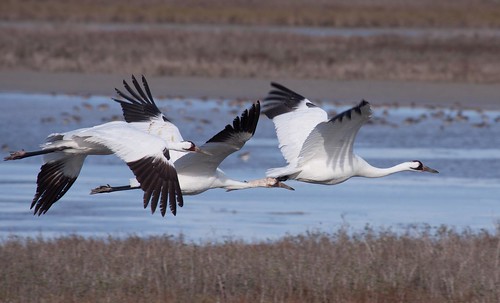 (To keep up with hurricane news as it relates to birds, see BirdWatching magazine's website.)

When the worst hurricanes descend upon us, while thousands of people’s homes are still underwater and the death toll of human beings continues to climb, it can seem inappropriate to consider the impact of the hurricane on birds and other wildlife, but environmental damage is part of the tragedy.

Harvey made a direct hit on the Aransas National Wildlife Refuge, causing catastrophic damage. This is where the entire natural population of Whooping Cranes spend the winter. And the International Crane Foundation’s field office in Rockport was destroyed. None of their staff or U.S. Fish and Wildlife Service personnel was injured. The cranes haven’t returned for the season yet, and we can’t predict how badly habitat damage and polluted waters will affect them this winter. Ironically, a record 63 Whooping Crane chicks fledged at Wood Buffalo National Park in Canada this summer: the previous record was 49 chicks in 2006.

Just as we depend on Canada to protect Whooping Crane nesting habitat, Canadians depend on us to protect this critically endangered species’ wintering habitat. Hurricanes have always been part of the natural history of the Texas coast, but the increasing pollution in the aftermath of storms and flooding is not.

The Attwater Prairie Chicken National Wildlife Refuge suffered extensive damage. This remnant coastal population of the Greater Prairie-Chicken once ranged over six million acres of coastal prairie from the Nueces River in Texas to Bayou Teche in Louisiana; now it can be found only in two small areas in Galveston and Colorado Counties where the remaining 12,000 acres of habitat is 0.2 percent of its historic home; the population is now only about 100 birds, which is only 0.01 percent of its former numbers. One of the most serious problems facing it is from invasive fire ants destroying eggs, chicks, and brooding females; birds that survive the polluted floodwaters will face yet another horrible problem. It’s terrifying to realize Harvey may bring this splendid bird over the edge of extinction.

Oklahoma birder Jerry Davis wrote on the Oklahoma birding listserv that “hundreds of thousands of trees are likely to be lost due to storm surge of saltwater inland and flood waters on trees longer than trees can stand. This loss of habitat will not be replaced in our lifetime.” And Ron Huebner added, “hummingbirds are frantically searching for flowers along the Gulf Coast of Texas and finding none where Hurricane Harvey destroyed most flowers and flowering plants. I assume hummingbirds are more affected than insectivores as the havoc of Harvey might actually temporarily increase some insect populations and has exposed others that were previously unavailable in rotting trees, etc. The hummers need the energy to fatten up for the jump across the Gulf. I have heard from friends who can’t keep their feeders full due to the high drive-thru demand.”

We tend to tally the costs of these disasters in dollars, and in human lives. These are both important metrics, to be sure, but they minimize the importance of habitat loss and contamination even though, ironically, the more natural habitat we protect along coasts, the less damage hurricanes inflict. Had we protected more natural habitat along the Texas coast, we’d have saved billions of dollars as well as human lives. We see this over and over and over during hurricane season. But the only species on the planet that includes within its numbers actual rocket scientists doesn’t seem quite smart enough to understand that simple truth.
Laura Erickson at 6:57 AM
Share