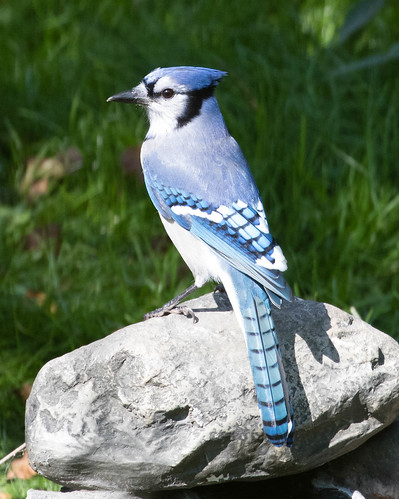 Tonight’s full moon is a wonderful way to start out the New Year. Not only is it slightly larger than normal—a “super moon”—but it also happens on the first day of a month of 31 days, meaning we’ll have a second full moon this very month. That second full moon is super-special, in part because the earth’s shadow will pass over it in a full lunar eclipse, and mainly because, as the second full moon during a single calendar month, it’s considered by many people to be a “blue moon.” For the purposes of For the Birds, that makes today the first day of National Blue Jay Awareness Month.

The Black-capped Chickadee may be my favorite bird, but the Blue Jay is in a close second. In many ways, it is nature’s perfect bird, combining brilliant intelligence, stunning plumage, and a perky little crest in a svelte 3-ounce package.

Blue Jays are a true migratory species. Thousands of them migrate in flocks along the Great Lakes and Atlantic coasts every spring and fall, yet much about their migration remains a mystery. Some are present throughout winter in all parts of their range. Young jays may be more likely to migrate than adults, but many adults also migrate. Some individual jays migrate south one year, stay north the next winter, and then migrate south again the next year. No one has worked out why they migrate when they do.

Unlike most migratory songbirds, jays migrate by day. We know that most Neotropical migrant songbirds wake up in the middle of the night during spring and fall, and head north or south seasonally—we learned this for certain by raising them in enclosures with conical floors covered with something that shows their footprints, that can clearly quantify how many times they move in each direction. We’ve also learned that they use star patterns to navigate, recognizing the one star that remains in a fixed position. If raised under a planetarium sky in which the stars all revolve around, say, Betelgeuse, those special enclosures prove that the little birds oriented using Betelgeuse as north instead of Polaris.

Blue Jays may wake occasionally and notice the moon and the stars, but because they don’t show migratory restlessness at night—they stay rooted to their perch rather than hopping about or taking off in the middle of the night—and because they migrate by day, star patterns and moonlight don’t help them navigate. We have no way of discerning whether they even notice star patterns as Indigo Buntings, White-crowned Sparrows do. Even if they don’t need to learn them for navigation, might they be like humans observing the night sky for fun? We’ve no way of framing that question to devise an experiment to find out, and the Blue Jays aren’t talking.

Blue Jays certainly have no concept of what we call a blue moon—their calendar is far more in tune with cycles of acorn production and weather patterns, so there’d be no such thing as two full moons in a single calendar month for them. I don’t know if they care whether people are aware of them, either. When they yell their heads off, it’s not to draw our attention to them but to warn their friends of danger—and sometimes the danger they’re warning about is us.

Like every other event on our human calendar, National Blue Jay Awareness Month is a human construct created for the benefit of humans, not Blue Jays. But our being aware of these spectacular and charismatic birds can’t hurt them. I like to think that the more we know about nature the more we’ll help it, at least in the long run, though based on how we’ve been reducing our protections of our national treasures, from national wildlife refuges, parks, and monuments to endangered species, I’m starting to realize that human selfishness trumps just about every other value. But maybe we could learn some things about planning for the future, and the value of cooperation and caring for one another, from a species that has been around longer than we have in part because its social systems are based so much more on cooperation and caring for one another than territoriality and competition. The current political scene makes me doubtful about our capacity to learn, but it’s worth a shot, at least once in a blue moon.