Wisdom the Albatross is 67, or even older!

In 1956, my biggest hero in the known universe, ornithologist Chandler Robbins, put a band on the leg of a Laysan Albatross on Midway Island. She was a nesting adult, so was at least 5 years old. Robbins was engaged in a research project for the US Fish and Wildlife Service and Department of Defense, designed to protect the albatross nesting colony while ensuring that the birds wouldn’t present a hazard to the new jet aircraft soon to be using Midway, so during his brief time there, Robbins needed to band as many birds as possible. Because it was their nesting season, he wanted to make his interactions with each bird as brief as possible anyway. The only details associated with most of the nesting birds’ band numbers were male or female, and “breeding adult,” meaning at least five years old. Obviously, a great many of the breeding adults banded that first season on Midway Island were much older than that.


Over the years, banders returned to Midway Island periodically, and continued banding birds. Now some of the birds they captured already wore those numbered bands. If the band was in excellent condition, they recorded the number as a recapture, and released the bird without further ado. If the band was wearing out, as happened every few years because of the amount of time albatrosses spend flying in corrosive sea spray and swimming in salt water, it was replaced. They logged this as a recapture, too, recording the old number as well as the new one on the new band card. If that bird was recaptured yet again a few years later with a worn band, they’d replace it, again recording both the old and new numbers, but no one had the time to rifle through the banding cards to find the card from when that old band had been put on. In those days before computerization, no one knew when a replacement band was itself a replacement band.

In 2002, Chandler Robbins returned to Midway Island (he was 84 at the time) to band albatrosses again. He replaced the worn band on one bird, and when he got back to Patuxent, Maryland, looked up when the original band was put on. That banding card indicated that it, too, was a replacement band. So he looked up that band number’s original card, and that one, too was a replacement. He went back through several more band numbers to finally trace the original band. This bird he banded in 2002 was in the very first group of albatrosses banded on Midway. This made the bird over 50 years old.
Starting in 2006, people started watching for this specific bird, now nicknamed Wisdom, every November and December when albatrosses return to Midway Island to nest. Albatross pairs produce just one egg per year, and we normally expect them to nest every other year. Just since 2006, Wisdom has laid 10 eggs, and successfully reared nine chicks to fledge.

Chandler Robbins died on the first day of spring in 2016. But this bird he banded—the oldest known wild bird on the planet—was spotted with her mate in late November. On December 13, her mate was seen incubating their egg. Females take the first turn in incubating, but just for a day or two. Then the male takes over for a full three weeks while the female returns to the ocean to feed. Then she takes over, and the parents keep taking turns incubating until the egg hatches two months after being laid. After that long break the female needed for recuperation, they both spend shorter times away from the nest. Within an hour of one bird returning, the other flies off for from several days to a week or more. If a bird doesn’t return—usually due to death—the mate may remain with the egg for as long as 58 days before giving up and returning to the ocean to feed. It’s essentially impossible for a single albatross to keep a chick alive for long.

Once the chick hatches, one parent stays with it when the other flies back to the ocean to feed—only now it’s literally eating for two. Albatrosses don’t carry food to the nest—they eat it all themselves, and feed via regurgitation when they return to land. For the first few days, a nestling is fed nothing but stomach oil—the parents’ bodies store this oil from their own fishy diet. As the chick gets bigger, the oil is supplemented with increasing amounts of partially digested stomach contents. Tragically, plastic is becoming a major part of most adults’ stomach contents, as human garbage covers more and more of the ocean. Many chicks are known to have died of starvation with full stomachs—the entire space filled with plastic. Perhaps Wisdom’s advanced age gives her help recognizing real food—after all, she was raising young before plastics were an issue.

As the chick gets older and requires more food at 2 ½ weeks or so, both parents fly off to get food, leaving the chick on its own much of the time. It may wander out of curiosity, to seek shade, or for whatever other reasons baby albatrosses think up, but it always returns to the nest or nearby when a parent returns to feed it, and always returns to the nest for the night. To keep cool in the heat of the afternoon, chicks rest on their heel bones with their big webbed feet several inches above the ground to help dissipate their body heat.

As with other colonial-nesting birds, albatrosses depend on very specific cues to recognize their own chicks. When chicks are tiny, they are fed ONLY in the nest—if displaced even a small distance, the parents won’t recognize one as its own. By the time a chick is about 10 days old, the parents recognize it and can distinguish it from other chicks, but they still only feed it when it’s in or near the nest.

Keeping track of a pair of individual birds is tricky enough. Wisdom’s chicks are usually banded, but it’s much easier looking for Wisdom at her known nest location year after year than searching for any of her young that, years after fledging, may return to the nesting colony but not at any specific sites. It’s enough to know that Wisdom herself is` alive and well and continuing to raise young at an age far older than healthy human females could.

It’s sad to realize that this bird banded so early in Chandler Robbins’s career outlived him, but thrilling as well. Chan was into conservation for the long haul—he wanted birds, individually and collectively, to go on long after he was no longer with us. Even though conservationists consider the needs of populations first, it’s individuals with whom we make visceral connections. As long as we have Wisdom, we not only can make valuable observations of a bird of known longevity, but we also have a living link to Chandler Robbins.

Because this is National Blue Jay Awareness Month, I’m trying to find a tie-in with Blue Jays for as many topics as I can. In 2016, we learned that the oldest known wild, banded Blue Jay had lived about 26 years and 11 months. Unlike Wisdom, that poor bird was killed in an entanglement with fishing gear. It had been banded in the Newfoundland/Labrador/St. Pierre et Miquelon area in 1989, and that’s where it was found dead in 2016. Living for almost 27 years old is a phenomenal accomplishment for a Blue Jay, at least as far as we know—they're harder to retrap than albatrosses. But we do know that several other Blue Jays have lived well into their teens. Fortunately, they pack a lot of living into the time that they are given. 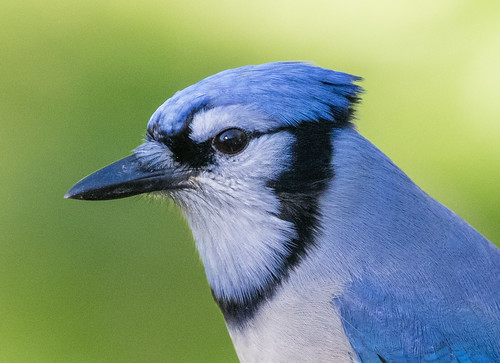