Where Are the Birds? 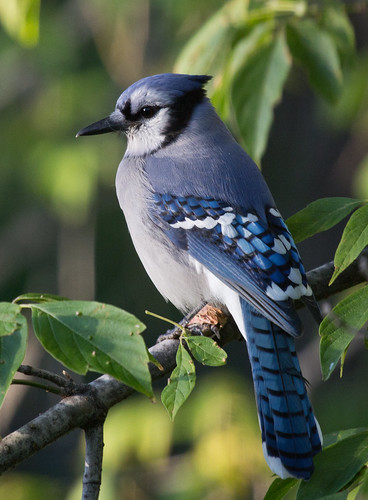 For quite a few years now, I’ve been getting letters and emails from people wondering why they’re not seeing as many birds as they once did. I received one such email this week. Mike writes:


I feed birds a variety of seed, but have observed an obvious decline in numbers.  Not as many Blue Jays, Pine Grosbeaks, and woodpeckers, and for the first time in years the redpolls have not found my nyjer seed feeder.  I still see many chickadees and nuthatches.  Is there a real reduction in numbers, or is it in my local area, or could it be something that I am not doing?

Since it’s the last day of National Blue Jay Awareness Month, I’ll start with Nature’s Perfect Bird. Blue Jays are declining somewhat. Based on Breeding Bird Survey numbers since 1966, their numbers fluctuate here in Minnesota but show no overall decline. 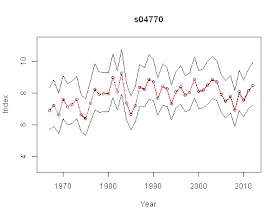 An actual decline is more noticeable in Wisconsin: 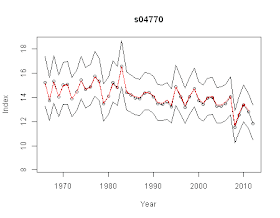 and especially over the whole United States. 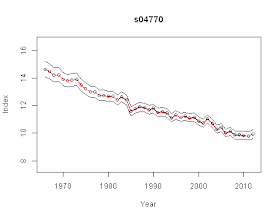 Blue Jays are few and far between during some winters, but no one has teased out their complicated migration patterns. They concentrate in winter in areas with abundant oak trees. One or two have been hanging out somewhere in my neighborhood, but I've only heard and/or seen them a handful of times this year so far. 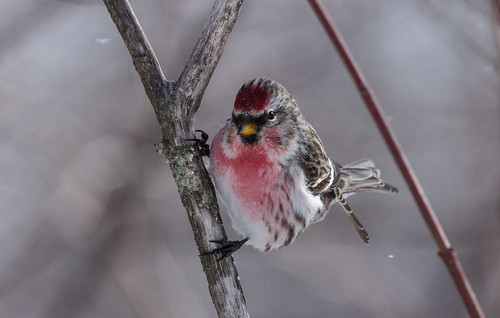 Redpolls, siskins, Pine Grosbeaks, and crossbills are "irruptive" species, so we expect big numbers some years and small numbers or even none in other years. But in irruption years, the numbers do seem to be lower than they used to be. This year, redpolls have been pretty abundant at the feeders in the Sax-ZIm Bog up near Meadowlands, but not in my yard. On Monday, Jan 22, about 250 showed up in my yard and remained for a few hours, but they disappeared at about 2 pm and that was it--not a single one since! It used to be that when redpolls were in northern Minnesota in good numbers, I always had at least a few in my yard, but as their overall population decreases, they can stick to more natural habitat without needing to spread into marginal habitat in town. Unfortunately, they breed further north than breeding bird survey road transects extend, so we don’t have data for them in summer. 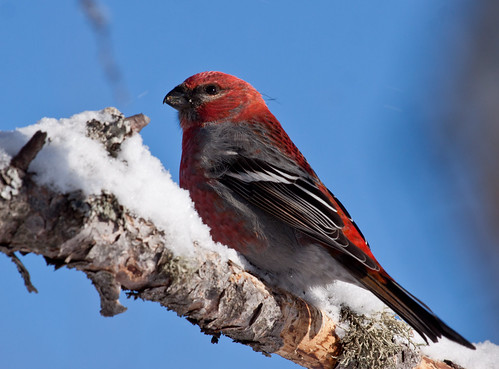 Pine Grosbeaks are around in pretty good numbers in areas like Isabella and the bog, but I've only had a small group for an hour or so all winter. They don’t breed in the eastern United States. In Canada, their numbers swing wildly, but are trending downward. 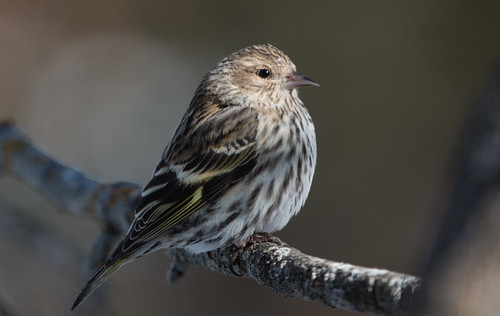 
What is happening to cause declines of the northern birds is too complex to attribute to a single cause. More and more swaths of northern forest are managed for pulp with shorter rotations, keeping many trees, especially hardwoods, from reaching the age for seed production. Several northern species feed their young spruce budworms, and we spread Bt over more and more northern forest to control that. The Bt isn't at all toxic to birds, but it wipes out their primary protein source for their young. Winter finches are also killed by cars in fairly high numbers because they’re drawn to the salt and grit we use on highways in winter. Another factor reducing the numbers of a lot of our winter birds is the huge amount of clear-cutting in Canada for oil extraction via tar sands. An incredible amount of forested habitat has been destroyed for this. 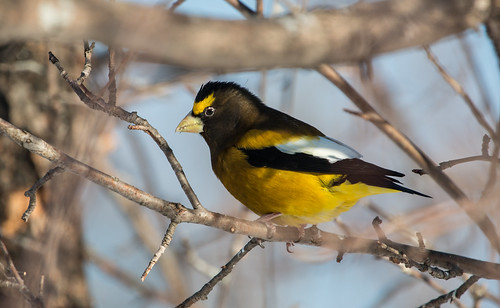 When flocking birds decline, they may seem as abundant as ever in quality habitat even as they disappear from more marginal habitat. So people in the best habitat are sometimes complacent as the birds decline in places like Duluth. Back in the '90s some listeners pooh-poohed me for complaining about Evening Grosbeaks disappearing, but now they've become rarities everywhere. 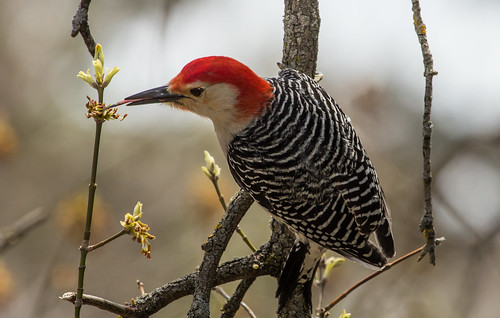 On the other hand, cardinals and Red-bellied Woodpeckers are spreading north, so we can see more of them than we used to in our backyards.

I have had one or two Red-bellied Woodpeckers almost every day this year--they were extremely rare back in the 80s and 90s, but are expanding their range northward. They are more likely to be found in Duluth than in wilder habitat up here, because they mostly focus on hardwood trees, especially in the open habitat of neighborhoods rather than in genuine woodlands, and because one of the factors that helped them become established up here was bird feeding. 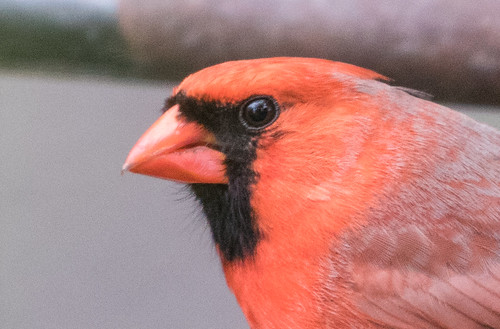 Cardinals have also expanded up here, and usually I have one or two at least, but this winter I've only heard them once from my yard--I haven't seen them in my yard at all yet. My desk where I work is set at a window where I can see many of my feeders, so I'm not missing much, but there hasn't been much to miss.


Except for the day that I had the redpolls, I've had very few regular birds in my yard this winter. But as the snow started falling on January 30, I started seeing more. And as birds deplete natural food resources through February and into March, more winter finches will turn up again, before returning north to breed. Those of us committed to helping birds take joy where we can. And Nature's Perfect Birds the Blue Jays, and our good old chickadees, spread joy no matter what. 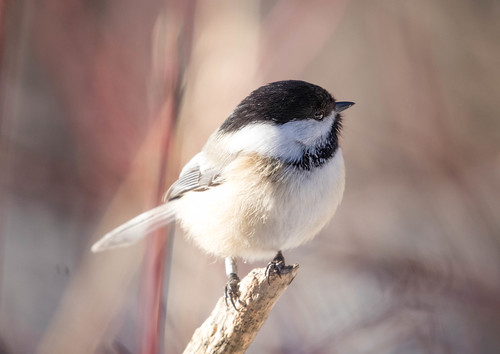