The Minnesota Vikings' Curse of the Bird-Killing Glass 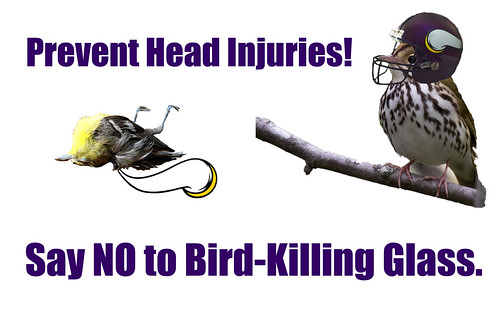 On Sunday, the Super Bowl will take place in a tragically flawed new stadium, much of it constructed of bird-killing glass. That is of course why the Minnesota Vikings are not going to be playing in it in the Super Bowl. If there were any question that it was the Curse of the Bird-Killing Glass that doomed the Vikings, the fact that the team was dispatched by Eagles should dispel all doubt.

Dr. Daniel Klem of Muhlenberg College in Pennsylvania has spent his entire career studying the issue of bird collisions with glass, starting in the 1970s when not one conservation organization considered the problem a serious one. After decades of research, when he presented a paper suggesting that his conservative estimate of the number of birds killed at windows annually in the United States was between 500 million and a billion, some prominent ornithologists pooh-poohed his conclusions. But as they finally started doing their own research into the issue, their own studies affirmed Dr. Klem’s numbers and the horrifying magnitude of the problem. Windows and house cats, like heart disease and cancer, are indeed the top outright killers of birds in the United States.

In recent decades, Dr. Klem has been tirelessly working with glass manufacturers to come up with glass that is visible to birds. On the Muhlenberg campus, some of the glass is fritted—cut with a pattern making it visible to birds. Fritted glass has the additional advantage of being significantly more energy conserving than plain glass—both those factors led the Dallas Cowboys to build their new stadium using fritted glass.

Since 2012, all new construction built with public funds in Minnesota is supposed to meet sustainability guidelines, including energy conservation, that fritted glass would have met, but the building plans with energy squandering, bird-killing glass got grandfathered in despite the new requirements. Ever since the plans were first revealed in 2012, the birding and conservation communities tried hard to get the glass changed. My friend Sharon Stiteler, author of 1001 Secrets Every Birder Should Know, who is also known as Birdchick and is a long-time Vikings fan, was quoted by Gwen Pearson in Wired saying, “Holy crap, that’s gonna kill a lot of birds.” Dr. Klem said, “You’re building a bird killer.”

Although conservationists were supposed to be able to study birds killed by the glass, a January 31 article in USA Today pointed out that the 60 dead birds collected this fall were not the only ones killed. There was evidence that birds were disposed of by stadium employees, killed in inaccessible areas of the stadium, and removed by scavengers or the public. Injured birds may have flown off and died of head or spinal injuries away from the stadium complex. And there were days when no one was allowed near the stadium, and days when no volunteers were available to search for carcasses. So the estimate of 360 birds that could be killed by U.S. Bank Stadium in a three-year period “significantly underestimates true mortality,’’ according to the preliminary report.

Ironically, the exact same company that manufactured the glass for the Dallas Cowboys was under contract for the glass for the Vikings, too. Changing the contract when the problem was publicized would have cost about a million dollars more—less than a tenth of one percent of the more than billion dollar price tag. To fix the issue at this late date would cost $10 million. As Josh Peter wrote for USA Today Sports, “Some people will blame the “dumb birds.’’ But it’s the people who failed to address the problem years ago who are the real Dodo birds here.”

It can be prohibitively expensive to replace our windows with bird-safe glass, especially for regular human beings without public funding and a multi-billion dollar football franchise. But Jeff Acopian created Acopian BirdSavers, an affordable and extremely effective way we can treat the windows on our houses to make them genuinely bird safe. I talked to Jeff by phone this week; tomorrow I'll play part of our conversation about his wonderful Zen Wind Curtains.