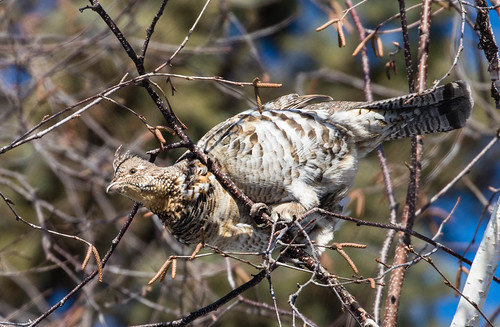 Birdwatching is like a box of chocolates: you never know what you’re going to get, but it’s certain to be sweet. That’s what I always say, and that was exactly what happened this weekend at the Saz-Zim Bog Winter Birding Festival. I’d brought my little birding dog Pip along because she needed a few lifers that have been appearing now and then, in particular the Great Gray and Northern Hawk Owls. We missed out on them in the bog, but did get one really cool and unexpected treat.

I spent Friday and Saturday nights with my good friends Gail and Chuck Prudhomme in Meadowlands, and headed out Saturday morning with Pip to go birding on our own. But before we even made it to the car, I spotted a Ruffed Grouse in a birch tree. The sun was shining as I aimed my camera toward it and started clicking away. I ended up with a series of detailed photos at close range, showing the grouse eating buds, its feet gripping branches and even small twigs—easily my best Ruffed Grouse photos ever. 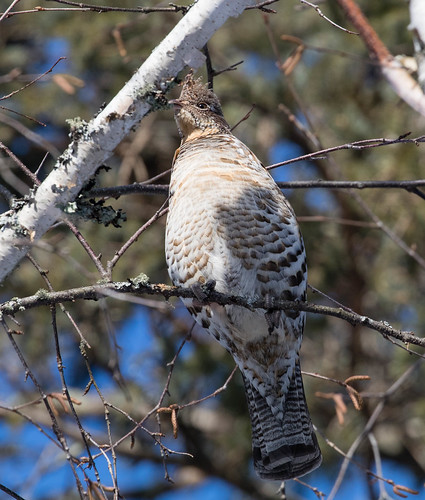 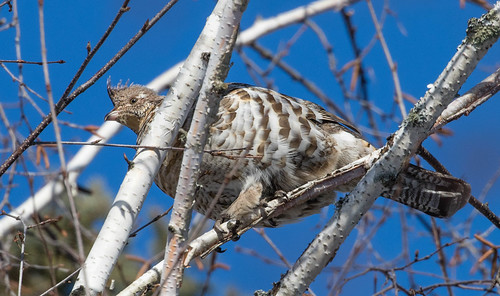 Up until Saturday, I’d seen grouse feet at close range only in museum drawers, but those feet are so fascinating in life that I was thrilled to have a close-up view of them in actual use. 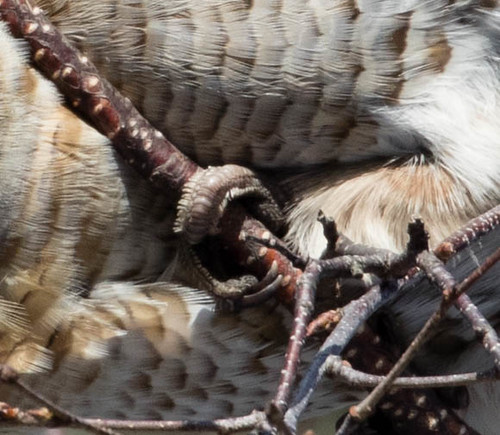 Every year in mid-September, long, stiff projections start growing from the scales on the sides of grouse toes. It takes about three weeks for these growths, called pectinations, to reach full size. Those growths fall off in the spring—usually in late April or early May, but sometimes as early as late March.

The stiff pectinations greatly expand the surface area of the grouse’s feet, so are usually explained as “snowshoes,” because they presumably help Ruffed Grouse walk on the surface of deep snow without sinking. Gordon Gullion had another explanation which makes sense, too—he believed that the pectinations help the grouse grip icy branches while feeding on buds.

The two explanations both seem not just plausible but equally important for grouse survival in their range, where winter weather includes both ice storms and deep snows, in the same way that my good winter boots have grippy soles for walking on ice and are high enough for walking in deep snows. It’s nice to have foot coverings that do the job no matter what the weather throws at you.

Like most birds up here, grouse plumage is thicker in winter than in summer—they lose feathers in spring before they start replacing them. The ones up here are well feathered on their tarsi—what we intuitively but not quite accurately call their legs. My photos show that thick feathering, too. They can also take refuge from cold and wind under a literal blanket of snow when that is available.

One of the Ruffed Grouse’s most important winter adaptations isn’t visible on the outside—two blind offshoots where the large and small intestines meet, where our appendix is, called caeca (or ceca), grow enormous in winter. Within the caeca, digestion of aspen and birch buds takes place thanks to anaerobic bacteria that produce an enzyme to break down cellulose in the woody tissue. In spring, when the diet changes to more digestible leaves, fruits, berries, and insects, the caeca shrink.

So surviving winter is, for Ruffed Grouse, a literal as well as figurative matter of intestinal fortitude. It’s hard to say whether their special foot adaptations help them maintain their emotional equilibrium in winter, so I don’t know how well those pectinations help them, in the figurative sense, to get a grip. But sometimes a literal grip is all anyone really needs. 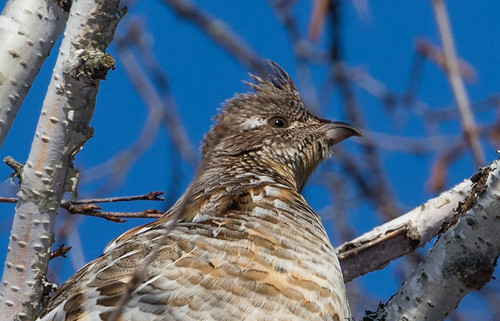