During the five years Russ and I lived in Madison, Wisconsin, I regularly birded what people call a “patch.” And when I say “regularly,” I mean at least once or twice a week most months, and from March 1st through the last day of school, every single school day morning. 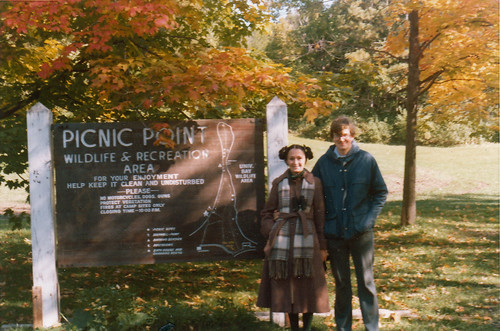 When we left Madison in early 1981, my Picnic Point list was at exactly 200. I’d seen plenty of lifers there, and had had plenty of wonderful experiences. Among my favorite birds of all there were the Black Terns that showed up each year in mid-spring and remained to nest. It was impossible to walk along the path around the marsh without stirring up at least one pair, as hard as I tried to not disturb them. 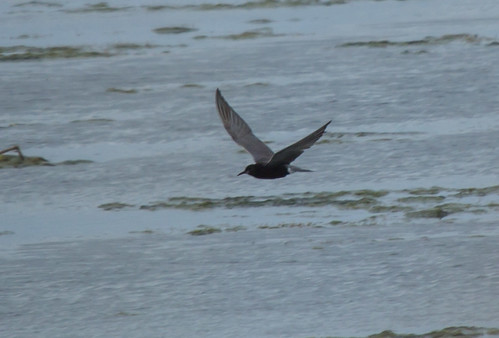 I’d never lived near other terns to figure out how to handle their defenses of their nests. I later learned how Common and Arctic Terns come up from the side or back to hit you hard on the head—Russ bears the scars of one tern attack when we were at Machias Seal Island. 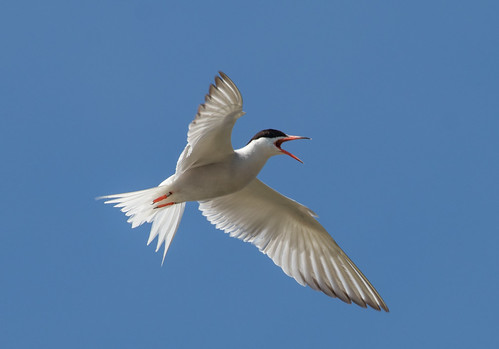 To safely walk about back when terns nested there, everyone had to carry a pole—the terns hit the highest part of the victims, so when the pole was higher than your head, it was the pole that got hit, but Russ put his pole down to take a picture of the kids holding their poles, and BAM!

In Madison I learned that Black Terns don’t actually strike, but they seem much more dangerous Common Terns because they fly straight toward you, looking right into your eyes as they zoom in, and not veering off until the very last moment. At first I couldn’t help but duck and cover my head, but I figured it was probably less stressful for the birds if I didn’t slow down but got out of there as quickly as possible. And one day while I was walking along that path, I got pooped on—the very first time ever that a bird pooped on me.

This of course prompted me to do what any self-respecting birder would do, so I started a new list, of all the birds that have ever pooped on me. After I started rehabbing, this list would have grown by leaps and bounds, but I decided to limit it to wild birds in their wild world pooping on me. 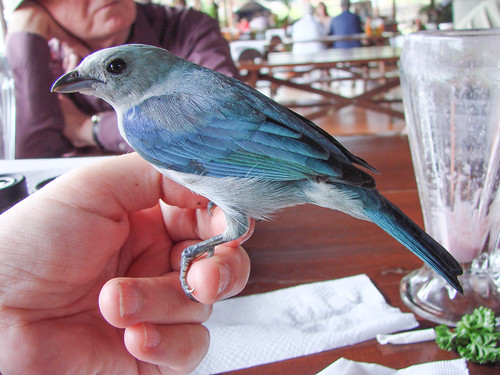 (The only exception I’ve made was in 2007 when I was in Costa Rica. A Blue-gray Tanager collided with a window when my group was having lunch at an outdoor restaurant, and our leader handed it to me. The bird was stunned, and sat quietly for several minutes. Like many Neotropical tanagers, this one ate primarily fruit, and I’d been studying bird digestion during my ill-fated Ph.D. research, so I found the glistening poop it produced fascinating, even right there on my hand. After the bird flew, I wiped my hand and that was that. I somehow neglected to use the disinfectant hand wipes and hand sanitizer gel that I kept in my belt pouch precisely for this kind of situation. Sure enough, that night I got horribly sick—the one time I’ve gotten sick in the tropics that was 100 percent my fault. I keep the Blue-gray Tanager on my pooped-upon list so I can at least feel that getting sick was worth the cost.)

Even though the rest of my pooped-upon list is limited to wild birds in the wild, over the years, I’ve added quite a few interesting species, including Ruby-throated Hummingbird and Pileated Woodpecker. Oddly enough, I still don’t have a gull or pigeon on the list!

Whether it had to do with being in the right place at the wrong time or the wrong place at the right time, I never ever tried to add a species to the list—except one time. In 2000, my family went to Hawaii for our last big family vacation, when our son Joey was a senior in high school. Somehow, I became fixated on the gorgeous White Tern, which had recently been split from Australia’s Fairy Tern. I not only wanted to see this bird—I wanted one to poop on me, to bring my pooped upon list full circle, starting with the Black Tern and ending with the White one.

The easiest place to find White Terns in Hawaii is at Waikiki Beach on Oahu, where some of them nest. This species’ nesting is perhaps even cooler than its stunning white plumage. The female lays a single egg not on the ground or some thick substrate, but directly onto a bare thin branch in a small fork or depression.


To find nesting or roosting birds, all one needs to do is scan with binoculars on every fairly horizontal branch, and this was made even easier for me because one bird was sitting on a power line right out in the open! I positioned myself in what seemed like a propitious spot and waited.

Russ and my kids have always been extraordinarily tolerant of my eccentricities, but my sitting down on the grass in a public park waiting for a bird to poop on me while people milled in every direction exceeded even their equanimity. So they all went to a restaurant for ice cream while I sat there.

Waiting for a bird to poop is not the kind of experience most people engage in, probably for good reason. But sitting there was enjoyable. Every time I looked up, I saw the ethereally beautiful bird—sometimes called a fairy or angel tern with good reason. And the gorgeous bird often looked right at me—its large dark eyes meeting mine filled me with joy. There are worse ways to spend a half an hour.

It took a good ten minutes before the bird finally let go, but the poop plopped onto the grass to my right. So I wiped the grass off and moved over a bit. The tern must have been perched there digesting a meal, so it took only seven or so minutes for the next delivery, that one to my left. The next plop came a good ten minutes later, this one making a direct hit on my hat at the very moment that I saw Russ and the kids returning. Despite their best intentions, they were there to witness the memorable event. They all seem to have recovered, and I will always treasure my time directly under an obliging White Tern, my Best Bird EVER!


You can see all of "Laura's Best Bird EVER!" posts linked here.
Laura Erickson at 5:56 PM
Share