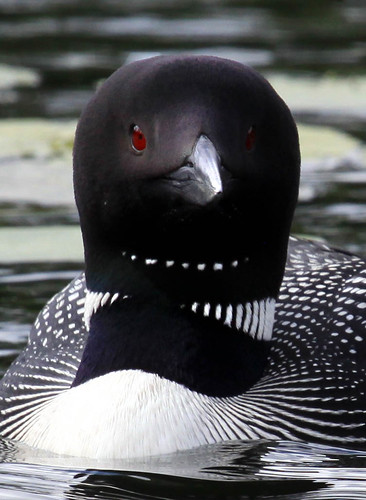 A few weeks ago, I asked listeners to send me a recording or a voice mail giving me their name, their favorite bird, and a brief reason why. A 15-30 second recording can be emailed to favoritebird@lauraerickson.com, or you can call Lisa Johnson’s KUMD voicemail after 2 pm at 218-726-6755. These instructions are near the top of the sidebar of this blog, too.

Not everyone makes digital recordings, so a couple of people have sent me emails telling me what their favorite bird is. Mike Elliott of Jacobson, Minnesota, sent me an essay about a lovely encounter with a Common Loon he calls Lady Flame, and how his brief interlude with her led to the best fish fry of his life. It’s too long for me to read on air, but I’ve linked to it here. Mike considers the loon his Spirit Bird.

More and more people in canoes are having close encounters with loons, though Mike’s encounter was definitely on the magical side. Based on stories I’ve been hearing from listeners, many loons in northern Minnesota and Wisconsin seem to have figured out that Bald Eagles are reluctant to drop down and attack a loon or grab a loon chick when the loon is anywhere near a boat. Several people have told me of an adult loon leading its tiny chick near a canoe, or a pontoon boat with its motor off, and then leaving the chick there to go off fishing. Until the past few years, I’d never heard of this happening at all, so it appears to be a genuinely recent phenomenon.

There are so many ways that our species, often completely unknowingly but sometimes with malice aforethought, harms birds, and loons are among the most vulnerable to human-caused harm. They pick up lead sinkers, get entangled in tackle and monofilament, and eat fish contaminated with mercury. We don’t even think about the ways we cause that, but every one of us using electricity from a coal-burning power plant contributes to the mercury problem. Dental amalgam fillings contain mercury; indeed, even though many or most dental offices have installed amalgam separators, which catch and hold the excess amalgam waste coming from office spittoons, the EPA says that dental offices are still the single largest source of mercury at sewage treatment plants.

Many appliances and machinery, from irons with automatic shut-offs to refrigerator and car doors that switch lights off when closed, are laced with mercury, especially older models. Fluorescent lights and button batteries are other sources. And antique mirrors, barometers, and other wonderful old items can have disturbingly high levels of mercury. All these items should be disposed of at hazardous waste facilities, not landfills. It takes more work, but that is a reasonable price to pay for using these products to begin with.

Shoreline runoff from fertilizers, weed killers, and lawn pesticides damages water quality for loons. Fortunately, a great many people with waterfront property belong to local lakes associations, and many of these groups are very conscientious about protecting the water, for humans and wildlife both.

The first loons are already being spotted here and there. Apparently Mike Elliott’s loon and the ones that trust us enough to leave their babies near us think we’re a fairly innocuous species--certainly more innocuous than Bald Eagles. Mike Elliott said he'd never thought about loons approaching boaters to protect their families before, but added:


Two Summers ago on Vanduse Lake, where I live, I witnessed the passion and fight of mom and pop warning off our local area eagle that was attempting to have one or both of their kids for lunch. The eagle left. They won. But the victory was short lived as about a week later the couple were swimming alone.

As we approach the 48th anniversary of the first Earth Day, I hope our species' innocuousness grows, so Mike’s beloved Spirit Bird and the loons on everyone’s lakes can live long and prosper. 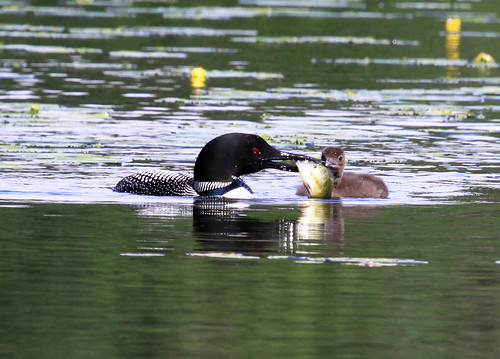