On April 30, 1976, Russ and I left for a Michigan Audubon field trip to northern Michigan. He and I camped in a state forest close to the Michigan State Prairie Chicken Management Area in Osceola County so we could meet the other field trip participants well before first light on May 1. We got little sleep because the spring peepers were calling up a storm that whole night, and we had to get up while it was still quite dark to meet the group where the blind was to observe the state’s last remnant population of prairie chickens dancing. The entire flock was about to disappear within the next few years, though our group was still hopeful that these mating birds could somehow defy the odds. We gazed at them for a couple of hours. After they dispersed, we headed north, making a quick stop at Hartwick Pines State Park, where I saw my first Evening Grosbeaks and Pine Warblers, and then we headed on to Whitefish Point. By the time we arrived after what had already been a full day,  everyone was more than ready for lunch.

I’d already added eight lifers that morning and was very hungry myself, so you’d think I’d be happy to sit down with our group for at least a bit of a lunch break. But I’d never before been to Whitefish Point, and so after a quick bathroom break I grabbed my bag lunch and headed back outside for some more birding. And right in the gravel-and-grass parking area, I came upon another new bird—a tiny, gorgeous sparrow. I rifled through the pages of my field guide as the bird obligingly stayed nearby, sometimes on the ground, sometimes in one or another small shrub. That kind of cooperativeness meant the little guy almost certainly had had a long night migrating and still needed rest and food. After looking through every sparrow in the book, I settled on Le Conte’s Sparrow. 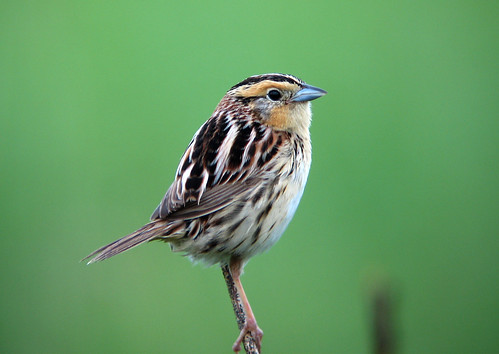 After I felt satisfied with my identification and had drunk in its lovely features, I ran inside to tell everyone. And instantly the on-site bird bander told me that was impossible—he’d never seen or heard of a Le Conte’s Sparrow on Whitefish Point before. I was still very much a beginner, and didn't have the cockiness or confidence to argue the point, but I said the bird was probably still there and I could show it to him. He skeptically followed me to the parking lot, most of the field trip participants in tow, and sure enough, there was the bird, and sure enough, it was indeed a Le Conte’s Sparrow. He let out a triumphant whoop as if he’d found it himself and ran to his truck get a mist net. I’d never before seen one of those—it looked like an extremely fragile volleyball net. He set it up at the edge of the parking lot maybe 30 feet from the bird. Then he had us all line up on the other side of the bird and slowly walk forward, driving the bird toward the net. When the tiny thing was snagged, he quickly extricated it, transforming a bird in the bush into one in the hand.

This was the first time I’d ever seen a bird get banded, and it made a deep impression. The bander was a big guy, with huge hands. The size difference between him and the tiny bird was impressive enough, but what triggered my imagination was how the bird didn’t meekly submit to being manhandled—he threw his head back and opened his mouth, glaring at the enormous man with fury and defiance, reminding me of Ahab confronting the Great White Whale. 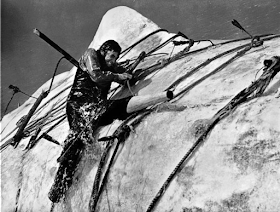 Unlike Melville’s Ahab, this little Le Conte’s Sparrow survived his first battle with his nemesis without getting his leg bitten off—rather than a wooden leg, my Ahab would forever carry a tiny aluminum band around his leg as a remembrance. And unlike Moby Dick, the bander didn’t get any deep wounds from harpoons and knives, though the little bird did bite his hand hard enough to draw a bit of blood. I, the Ishmael in this scenario, alone am escaped to tell thee.

When I got home, I headed to the university library to look up some numbers. The average Le Conte’s Sparrow weighs about 14 grams—that’s half an ounce. I don’t think Melville reported Ahab’s weight, but I found an old movie magazine on microfiche that had the next best thing—Gregory Peck’s weight, which was about 174 pounds. And I found in a book or encyclopedia article the maximum weight of a Sperm Whale, 63 tons. I worked out the ratios to discover that the Le Conte’s Sparrow was tinier, relative to Ahab, than Ahab was to the Great White Whale—and not just by a little. The biggest sperm whales weigh 721 times as much as Gregory Peck did; meanwhile, he weighed fully 5,643 times what a Le Conte’s Sparrow weighs. That’s an order of magnitude difference!

So my tiny little Ahab, fearless in the face of the Great White Bander, stood his ground and lived, escaping the dire fate that took Melville’s poor Ahab down into the depths. There’s no evidence that my avian Ahab spent the rest of his life obsessively seeking revenge—indeed, not one Le Conte’s Sparrow banded during the 1970s has ever been re-captured, so unlike Melville’s character, my little Ahab managed to move on from his ordeal without developing a monomaniacal obsession for revenge, leading an entire ship's crew to their deaths in the process. I don’t think Herman Melville ever had a chance to see a Le Conte’s Sparrow, much less observe one being banded, or his greatest work of fiction might have turned out a bit differently.

To this very day, whenever I have to stand up to something fearful, I see that Le Conte’s Sparrow in my mind’s eye—that unobtrusive, tiny guy holding firm in resistance as long as the danger remained. That tiny little Ahab was my best bird EVER!