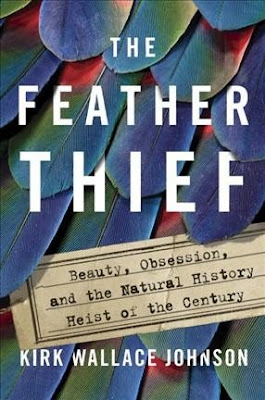 Back on November 30 last year, I received an email from the publicity department at Viking Books, asking if I might be interested in reviewing an upcoming book. The book sounded amazing: titled The Feather Thief, by Kirk Wallace Johnson. I quickly said yes—the book was about a horrible theft of rare specimens from one of the largest, most important bird collections in the world, the British Museum of Natural History’s Tring Museum. I expected the book to be fascinating to me, mainly because I love natural history museums. I am not a museum collector except in having sent window-killed birds and one poor mangled Ivory Gull to museums, but I have often found myself fretting and fuming about the careless way people without a background in collections dismiss the importance and priceless value of the specimens. So the book sounded right up my alley, but I figured it would be of rather narrow interest to people not so enamored of museums and study skins.

I devoured the book, which I loved, and even almost snagged an interview with the author, but the people at Viking wanted to hold off until closer to the April release date. By then, I was swamped with my spring speaking gigs, my mother-in-law broke her hip, and I got busy with my daughter's wedding, and I completely dropped the ball. Meanwhile, I was scooped by lots of other news media, because the book is truly remarkable. Indeed, This American Life did not just a segment but an entire program about it, which is how I suddenly remembered I was supposed to review it. I bought a published copy and read the book again. And it was even better than I remembered.

But the moment I had opened that advance copy last year, I realized I was in the hands of a master. And Kirk Wallace Johnson is, indeed, a master—a master writer, a master reporter, and a master human being. His previous book, To Be a Friend Is Fatal: The Fight to Save the Iraqis America Left Behind, was about his desperate work trying to save the lives of Iraqis who’d provided the US with translating and other services during our invasion. Johnson had been a coordinator of the reconstruction of the Iraqi city of Fallujah for the US Agency for International Development. He was almost killed in a horrifying PTSD nightmare when he sleepwalked out of a window; after his recovery he became the founder of the List Project to Resettle Iraqi Allies. That was heartbreaking, grueling work, seldom getting anywhere. When Johnson needed respite, he took up fly-fishing. And that is how in 2011 he learned about the break-in at the Tring Museum. His fishing guide mentioned the story of Edwin Rist, a 20-year-old American flautist and music student at London’s Royal Academy of Music who had recently been convicted of breaking into the Tring Museum and stealing 299 of the world’s rarest bird specimens for tying flies for salmon. Johnson was transfixed by the story, and became obsessed with finding out what happened to the unrecovered plunder.

What makes The Feather Thief remarkable isn’t simply the author’s quest to learn more about Rist’s theft. He also probes in dramatic and well-researched detail just why a suitcase full of dead birds was so valuable, both in terms of the fly fishing black market and, in a more important though less tangible way, because of the great lengths collectors went to gather the birds from around the world and protect their stuffed remains, and the extraordinary scientific value of those dead birds. Indeed, the birds at the Tring Museum had been moved there in the first place from the British Museum of Natural History’s main London building, at great risk to the curators’ very lives, during World War II to protect them from Hitler’s bombings. Johnson is not a birder, but he developed the same visceral sense of the value of the birds from his research that I feel.

But perhaps the main thing that makes this book remarkable and uniquely wonderful is how Johnson goes above and beyond reporting about a theft and how the police found the thief to becoming an actual crime investigator himself, because he so wanted to see some form of justice done to the perpetrator and the fly-fishermen who made the theft so lucrative. He became particularly obsessed after learning that a great many of the stolen birds had disappeared, and no one else was looking for them. It was Johnson himself who shamed some fly-fishermen into returning stolen goods to the Tring, and also Johnson who tracked down some of the stolen specimens years after the case was closed. Normally I don’t like an author to inject himself into a news story except in very small doses at most, but Johnson is an essential part of this story, and he’s such an engaging writer that the book held me riveted from start to finish. In ranking The Feather Thief on a scale of one to ten, I’m cranking this one up to eleven.

P.S. Back on December 15, I mentioned to the publicity department that the book had a tiny error—an anachronism that the author, about the age of my own kids, wouldn't have picked up on but a 66-year-old woman was exactly the kind who would notice. I wrote:

If there's time to make corrections, on page 53 he makes reference to "'parrot sausages,' in which live birds had their beaks taped shut before being stuffed into women's pantyhose..."

The time being referenced in the paragraphs around this are the 1920s and 30s, well before pantyhose made their debut. He'd be wiser to reference "women's hosiery."

When I read the published version, they'd made that change!

P.P.S. I'm not supposed to get political on the version of my podcast that is aired on radio stations, especially if it's not specific to birds. But Johnson's memoir about his experiences in Iraq and then trying to help those refugees who were targeted in their own country specifically for helping our country is essential reading for anyone who wants an accurate look at this shameful and on-going chapter of our nation's recent and current history.
Laura Erickson at 7:42 AM
Share
‹
›
Home
View web version