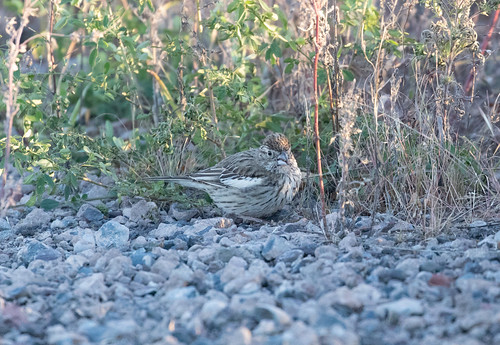 On Monday this week, my friend Dudley Edmondson discovered a Lark Bunting on Park Point by Sky Harbor Airport. He said the lost little bird was hanging out with Harris’s and White-throated Sparrows.

Late Tuesday afternoon, I got over there while it was still hanging out exactly where Dudley had originally found it, and where various people had reported it Tuesday morning, in the weeds and roadside just beyond the last hangar. Considering how easy it is for birds to fly, and how this particular vagrant was a good thousand miles from where it would normally be right now, it surprised me how it was sticking around in one tiny area for so long, but then I thought how much inappropriate habitat it must have flown over to reach Park Point from the High Plains of its breeding grounds, or the shortgrass prairies of Texas and Arizona and the High Plateau of Mexico where it should be headed for winter. Maybe when it finally discovered a good spot, it wanted to sit tight for a while before striking out into unfamiliar territory once again. It stuck around in that exact same area into at least Wednesday. 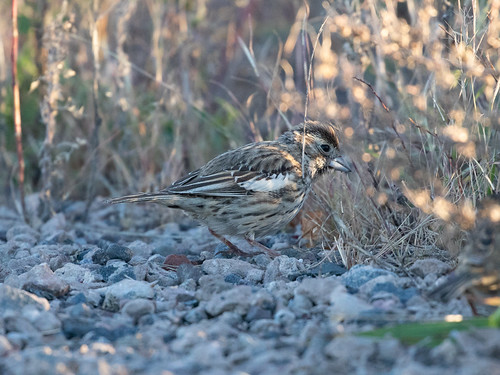 Because I didn’t get there until late in the day, my photos are low contrast and grainy, but these are the first Lark Bunting photos I’ve ever taken, so I can’t complain. During my Conservation Big Year, I visited Colorado in April before Lark Buntings arrived, and didn’t see them anywhere that year until November in Texas, where they didn’t let me get close. So I’m delighted to have any photos. But I badly want to photograph them in Colorado. I saw my lifer in Texas in the winter of 1978, but in 1979 I got to see males in full breeding plumage in Colorado and Wyoming in June and South Dakota in early August.

Unlike virtually all sparrows, adult male Lark Buntings have a striking black-and-white breeding plumage that makes it easy to understand why this was selected as Colorado’s state bird. But the dramatic male breeding plumage is entirely different from the basic, more sparrow-like plumage males wear in winter, which resembles that of the females. This time of year, Lark Buntings are all rather drab, with only the white wing patch to set them apart from a generic sparrow. Males usually show at least some blackish around the bill, which this bird does not have, but I can’t seem to confirm whether these blackish feathers are found in first year males or just adults, so I’m guessing the Duluth bird is a female but am not 100 percent certain. So unless someone very familiar with Lark Bunting tells me otherwise, I’ll have to call this a female of unknown age or a first-year male. 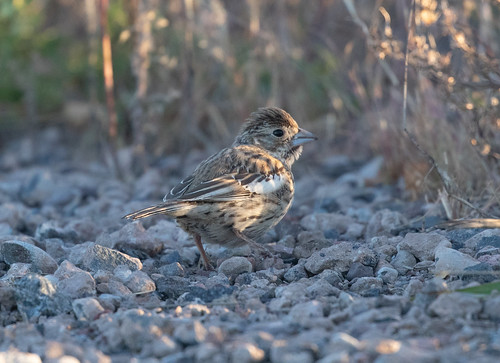 According to Sibley, vagrant Lark Buntings are "usually solitary," but this one is either functionally illiterate or uses another field guide, because it was hanging out with a Harris’s Sparrow when I saw it, and all the reports I’ve read noted that it was hanging out with one or more sparrows. That seems more in keeping with my National Geographic field guide, which says that Lark Buntings are "gregarious year-round." Most of the gregarious flocking species I am familiar with, such as waxwings and Pine Grosbeaks, join flocks of other species when they can’t find their own kind, so I wasn’t surprised that this little one was staying so close to the Harris’s Sparrow the whole time I watched. 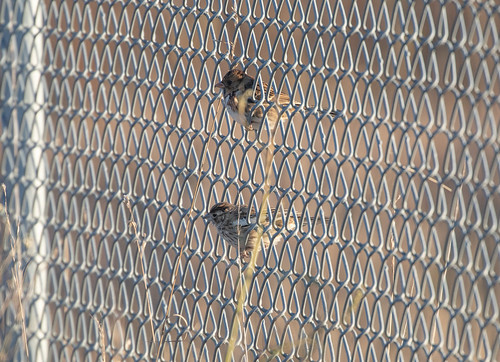 Lark Buntings once bred at least sporadically in southwestern Minnesota. But like most prairie species, they’re declining now, and have disappeared from the edges of their breeding range; nesting hasn't been confirmed in Minnesota since 1964. I saw my first Lark Bunting in this state in the prairie area of Rock County back in August 1990. This little guy in Duluth is only the second I’ve seen in Minnesota, and was a lifer or a new state bird for a lot of active birders. Even beyond the fun of adding a new bird, it filled a lot of birders with joy. I pointed it out to a couple of dog-walkers, and they seemed suitably impressed, too. I wish the enthusiasm we feel toward these tiny wanderers translated to protecting their breeding and wintering habitat, but with so many other pressing issues diverting attention from conservation and basic environmental protections, I'm afraid Lark Buntings aren't a top priority for anyone. The state bird of Colorado deserves better.