Yellow-rumps: Gone with the Wind 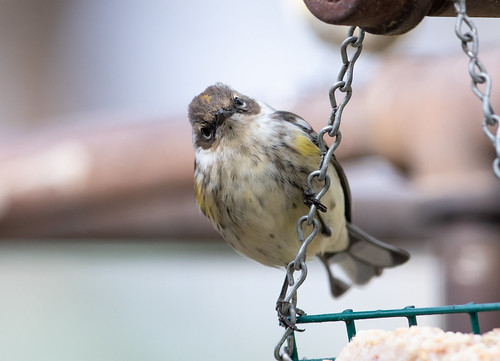 Last week I gave a TEDx talk in Bemidji, Minnesota. When Russ and I left on Wednesday morning, October 17, I still had at least 40 Yellow-rumped Warblers in my yard. When we got back at mid-afternoon on Friday, there were still 15 or 20. The wind was strong from the northwest, blowing in some snow that night and blowing out the warblers. One lingered on Saturday morning, but he or she didn’t stick around. On Sunday, October 21, I didn’t see one for the first time all month.

I’m not used to seeing as many yellow-rumps in my yard as I had this year—there were as many as 80 or even 100 in my yard much of the time during the first two weeks of October, and even as the numbers started to dwindle on October 15, my interest held strong because one of them was a lovely little leucistic bird. 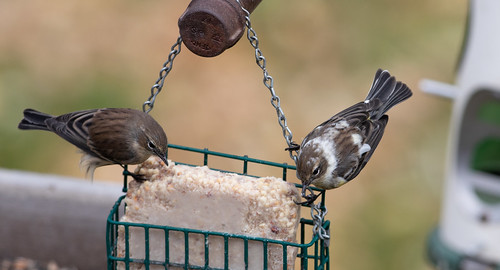 There’s something about any conspicuously aberrant individual that instantly snares my attention and affection—probably because it’s so easily recognizable as an individual. The moment I noticed the Yellow-rumped Warbler with unusual white areas on its plumage, I found myself immediately keeping track of it. The little thing held its own in faceoffs with other Yellow-rumps as they crowded into my suet cakes—in other faceoffs between Yellow-rumps, it’s tricky to figure which “won” because they’re hard to tell apart.

As thick as the Yellow-rumps were last week, this week they’re gone. Just like that. When I look at my calendar, these end-of-September migrants are way off. I’ve had large numbers of Yellow-rumped Warblers during the first few days of October before, but never into the third week of the month.

Yellow-rumped Warblers don’t look at or even think about our calendars, but it suddenly occurred to me that one of the other things happening outdoors right as their numbers peak is leaf color. This year, leaves remained green on a lot of trees much later than normal, and way more trees are still clinging to leaves right now, on October 23, than I’ve ever seen this late in the month.

Leaf color doesn’t seem directly, or at least simply, related to temperature—we’ve had some pretty cool summers where the leaves lasted relatively longer, and have had lots of trees changing colors early when the end of summer was warm and dry. But climate change involves rainfall patterns as well as temperature, and so may well be an important driver of changes in fall color.

Those changing leaves fill us humans with wonder, but I wonder how changing and falling leaves affect the insects up in trees and on the ground among the growing piles of leaf litter. That will be interesting to research, because those insects must affect insectivores like Yellow-rumped Warblers. While I was in Bemidji, I spent several minutes watching an Eastern Phoebe still flycatching on a beautiful but cold day. When I entered my sighting of it into eBird, I had to add details because October 17 was later than phoebes are supposed to be seen up there.

I’ll be looking for scientific papers about fall colors now, and how the timing of various trees losing their leaves relates to insect populations. As I hunker down, battening the hatches for winter and spending time sitting at a window watching my chickadees and winter bird arrivals, I’ll ponder this intriguing question. But meanwhile, I’m glad that my yellow-rumps have moved on. It’s getting cold out there!
Laura Erickson at 7:44 AM
Share