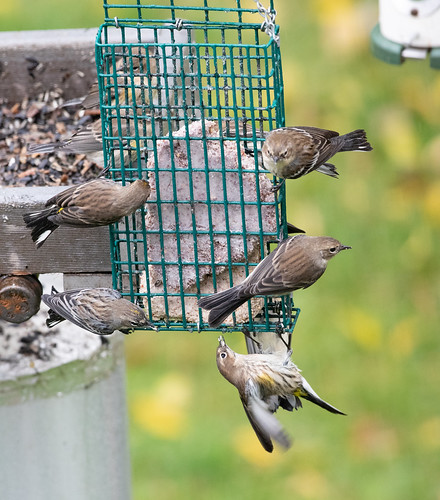 Every autumn is unique, but there are definite patterns that birds follow. We always have a major warbler movement in late August and through September, along with Cedar Waxwings. White-throated Sparrows come in in big numbers in September, then White-crowned and Harris’s Sparrows, and then juncos and Fox Sparrows as Yellow-rumpeds bring up the end of the warbler movements in late September and early October. Some years we’ll see large numbers of some or many species, other years will be more lackadaisical, but overall, fall migration is fall migration.

Sometimes when I think I’m seeing something I’ve never seen before, it turns out that I have—or at least something similar. Over the years, I’ve had lots of Cape May Warblers at jelly feeders. 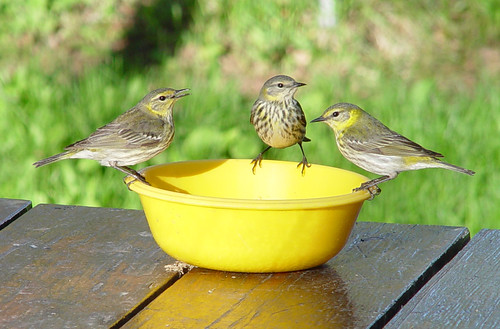 An occasional warbler of other species comes to my suet suet. Most notably, I’ve photographed one Pine Warbler coming regularly for a few days in 2003, 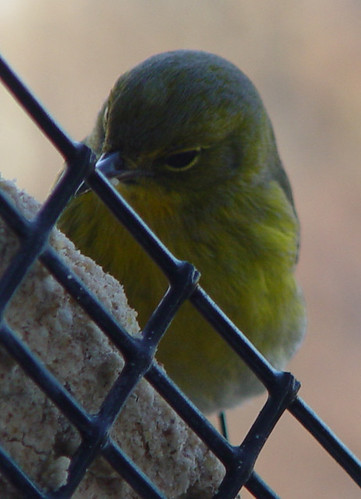 and what looked like a very confused, wet Chestnut-sided Warbler standing on my tray feeder in the rain in 2004. 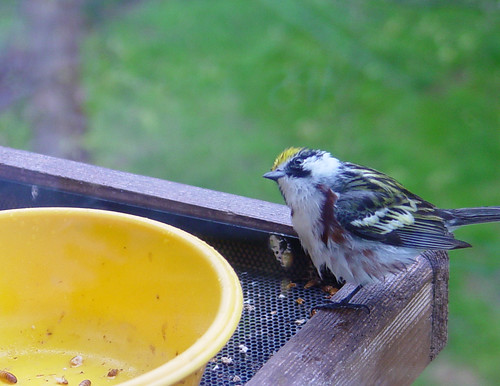 I saw my first Yellow-rumped Warbler at my feeder in 2001. 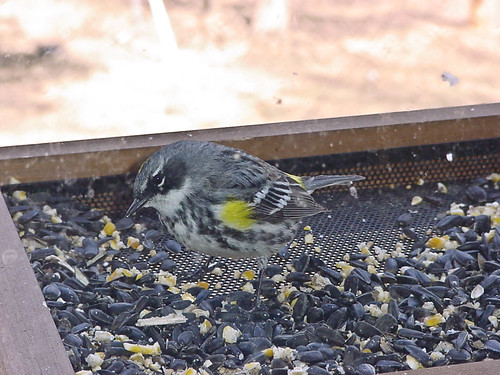 Since then, every now and then one would show up briefly in spring or fall. But in 2014, suddenly the little guys were everywhere. I took a photo at my feeder on October 7, 2014, captioning it in my blog “I've had as many as 12 Yellow-rumped Warblers in my suet and peanut butter feeders at the same time this week. This is not a typical visitor at bird feeders, but they're desperate.” 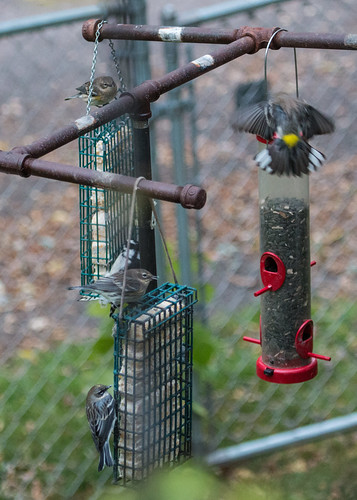 Since then, I’ve had good numbers a couple times, but this spring didn’t see any at my feeders.

But this fall, suddenly, there they were. And I don’t mean just a dozen or so—I’ve had as many as 30 Yellow-rumped Warblers at my feeders at once, with 80 in my backyard at the same time. 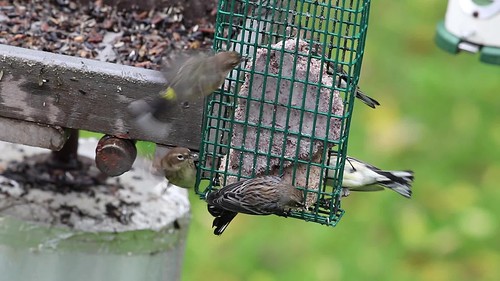 And this stretch of Yellow-rumps didn’t last for just several days or a week as it has in past weeks—it’s stretched through the first half of the month so far—I was still seeing at least 50 Yellow-rumps in the yard on the 17th. One of them is simply gorgeous—the first leucistic Yellow-rumped Warbler I’ve ever seen, with a pretty white collar, a few white patches, and a paler overall coloring except the yellow areas. 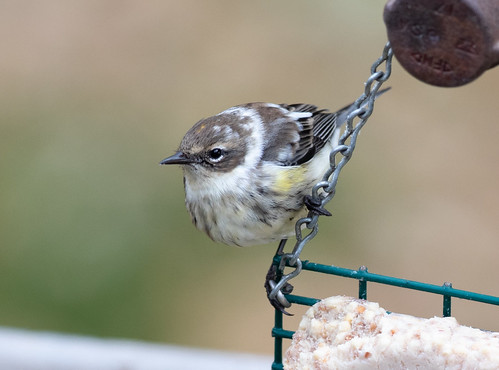 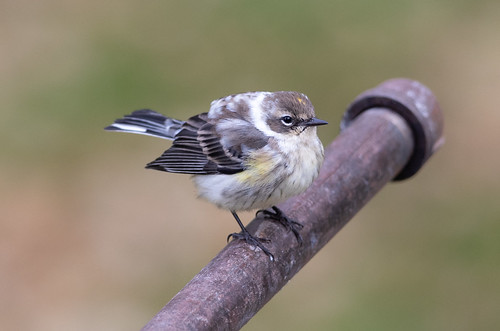 With so many warblers, I have three suet feeders filled with five suet cakes, and I’m needing to add one new suet cake every day, which may be more than I’ve ever used before, though when I was getting free raw suet from the grocery store in winters back in the 80s, I may have been using this much—I didn’t think to keep records. I’ve also been going through a lot of mealworms. I put them only in one little acrylic feeder stuck with suction cups to my home office window, for my chickadees, but of course the Yellow-rumps have discovered it, too. I’d not been handfeeding my chickadees all year—I mostly work from a desk treadmill now which makes it harder to notice when the chickadees are here, so I can’t jump to the window when they show up. But one chickadee still takes mealworms from my hand, and one or two warblers have tried that too, now—the only time in my life I’ve ever had a warbler alight willingly on my hand.

I’ve been using more than one 50 pound bag of black oil sunflower seeds each week, thanks to the huge number of Blue Jays I was getting as well as the high numbers of sparrows and juncos. That’s leveled off now that most of the Blue Jays have moved on, but even as the sparrow numbers seem to have peaked, I’m now getting lots of Purple Finches.

Every morning I’ve been surprised all over again to hear yellow-rumps chipping. One morning soon I’ll wake up and that sound will be gone. I’ll miss them, but my main feeling will be relief—it’s sort of scary to have them here so late when we’ve been having such cold weather now. And when they’re gone, people will finally stop asking me about drunk birds. At least I hope so. 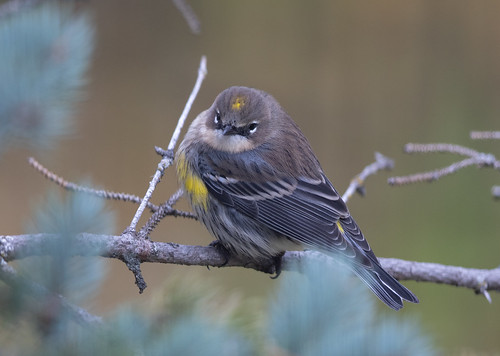