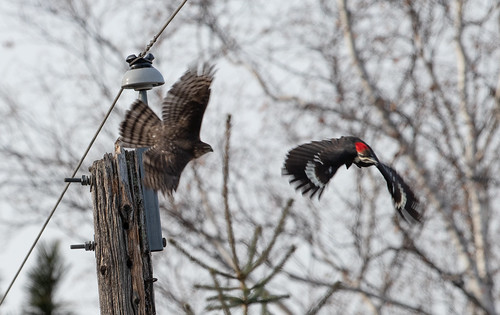 I love raptors. I’ve written an entire book on owls, two about hawks, taken thousands of photos of them, rehabbed several hawks and owls for days or weeks, and lived with an Eastern Screech-Owl for 17 years. There is a hawk or owl on the cover of seven of the books I’ve written or co-authored. I also appreciate the role of predation in the natural world, and fully realize that prey species are much more numerous than top predators, able to withstand predation.

But this week I found myself very angry at one particular female Sharp-shinned Hawk who was hunting in my backyard. First she made a pass at a male Hairy Woodpecker in my back box elder tree. The woodpecker yelled out a few obscenities and hightailed it out of there. Then she made a pass at one of my stupider pigeons, who hadn’t even bothered to fly off the power line until the hawk was less than a foot away, after everyone else in the yard had disappeared. Even my squirrels were sitting tight by then.

The hawk must have missed the pigeon—not more than two minutes later, she was back. So far I was interested, but hardly angry. I took a few photos of her and got back to my work. 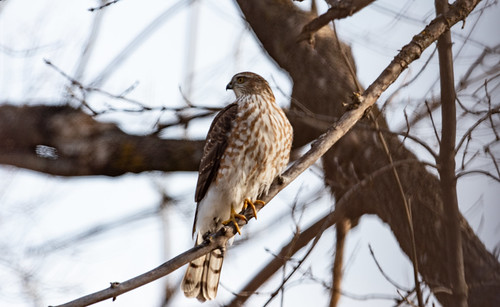 A few minutes later, I heard one of my Pileated Woodpeckers squawking. I ran to the window and there was the hawk, chasing my female Pileated Woodpecker, who’d been in one of my neighbor’s trees. From some angles the hawk looked bigger than the Pileated, and feisty as they are, I tend to associate Sharp-shinned Hawks with medium- to small-sized songbirds, so I started doubting my original identification. It seemed the right size for a Cooper’s Hawk, but looked wrong—the tail feathers were all the same length rather than tapered, the head seemed small, and the neck too short—Cooper’s Hawks have a weird, “bull-headed” appearance to my eyes.


The Pileated would alight on a tree, and rather than freeze, she’d peck restlessly and then look around to see where the hawk had landed. In a few of my photos, the two birds look about the same size, but it was pretty clear to my eyes at the time and in my photos after the fact that the Pileated was a little bigger, but not much. 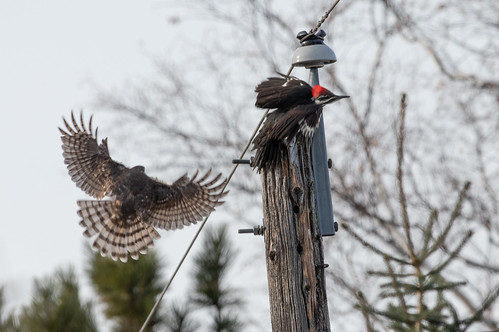 The Cornell Lab of Ornithology’s All About Birds website calls the Sharpie a “tiny hawk,” but it looked pretty darned big to me. I was starting to doubt my original identification. I was certain it was not a Cooper’s, but could it be a Northern Goshawk? It did have a fairly conspicuous white eyebrow line, a normal feature of goshawks, and it did seem pretty huge, and was attacking a Pileated Woodpecker! Would a Sharp-shinned Hawk really do that? I decided to consult with a real expert.

Frank Nicoletti, the Banding Director at Hawk Ridge in Duluth, has held thousands of goshawks over his long career and a couple of orders of magnitude more Sharp-shinned Hawks. He was nice enough to look at my photos to help me with the identification. He confirmed that the bird was a Sharpie, but understood my confusion about how huge it looked attacking the Pileated, and it also had that white line above the eye, as immature goshawks typically do. 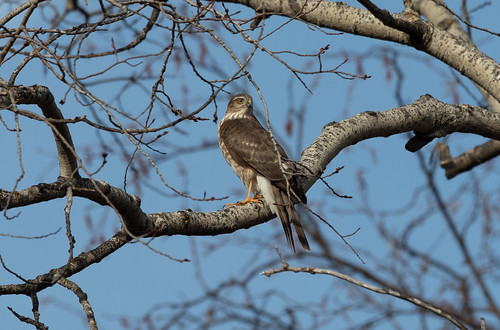 The wingspan of a Pileated Woodpecker averages 29 inches, while that of a large female Sharpie is only about 22 inches. But the wingspan of the smallest male goshawk is over 40 inches—in my photos of the chases, the hawk is definitely at least a little smaller than the Pileated. 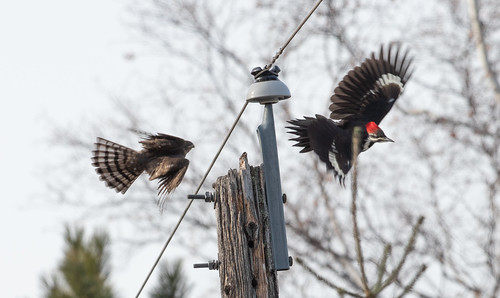 Cooper’s Hawk wingspans run between 24 and 35 inches, so using size alone, I’d have bet good money on my hawk being a Coop, but it just didn’t look like one—when perched, the tail seemed too short, and the head and neck not big enough. Frank told me that it’s weird but of the three accipiters, the Cooper’s Hawk is the outlier, and that a lot of people just don’t realize that it’s easier to confuse immature sharpies and goshawks than either one with Cooper’s.

I’ve not spent much time studying and identifying hawks in the field—I’m supposed to be sort of an expert, but really, you need to spend day after day, week after week, watching them and holding them in the hand as Frank does to be a genuine expert at hawk ID. Frank is one of the world’s nicest guys, so he wouldn’t have made me feel foolish about not being certain whether my bird was a sharpie or a goshawk, but I was still relieved when he said young sharpies and goshawks can be oddly easy to mix up. The one in my yard was clearly a female to be as large relative to the Pileated as she was.

Anyway, the hawk dive-bombed the Pileated ten or twelve times while I watched—I lost count after I got to eight. The Pileated kept alighting on a tree trunk or the power pole, tapping restlessly. 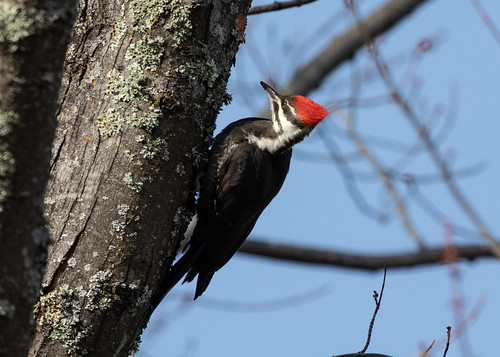 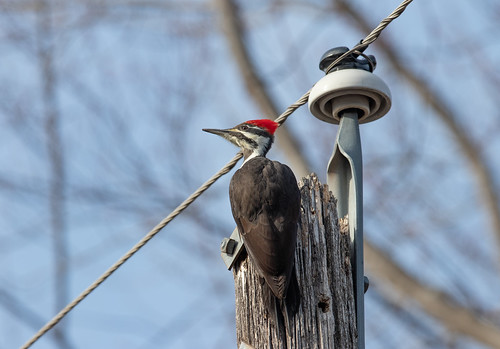 Then she'd fly off to another perch, the hawk in hot pursuit as the woodpecker cursed the way the Hairy Woodpecker had, only in Pileated Speak. I don’t think a Pileated would act that way with a Goshawk, and if it did, it probably wouldn’t have survived more than two or three of those flights. This whole drama started in my neighbor’s yard to the east, then in my own yard for several attacks, and then moved on to my neighbor to the west, and beyond. I lost track of them when they were three houses down and moving west.

For the rest of the afternoon until dark, I kept scanning the trees to see whether my Pileated would come back, but neither she nor my male appeared again until the male came in and ate bedtime snacks at three feeders before flying off toward one of his night roost trees. I’m going to be a nervous wreck for the next day or two, until I see the female again. Yes, I like hawks in general. But not when one goes for MY Pileated Woodpeckers. 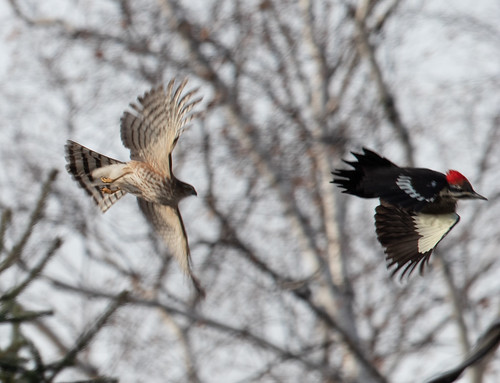