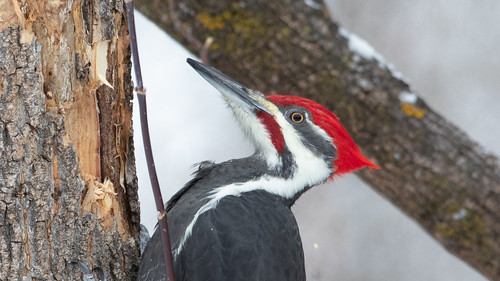 The Pileated Woodpecker is one of my favorite of all birds—it’s so striking, both in appearance and more literally, in how it makes its living, striking its powerful beak into trees and suet cakes. The first time I saw pictures of it in my field guides, I became obsessed. I saw my first in June 1976. Russ got a distant but identifiable picture, which may be why I’m so uniquely thrilled when I get photos of this species.

Every time I’ve seen one ever since I’ve been thrilled—it’s a bird you just can’t take for granted.

Raising a young pileated for several weeks in 1997 while I was rehabbing was an extraordinary experience. That was in the days of film, before I was taking many photographs, but I did get a few of Gepetto with Katie and Tommy. 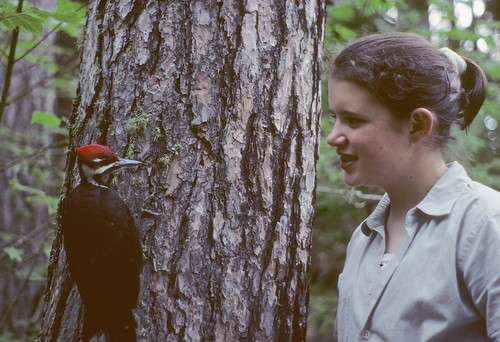 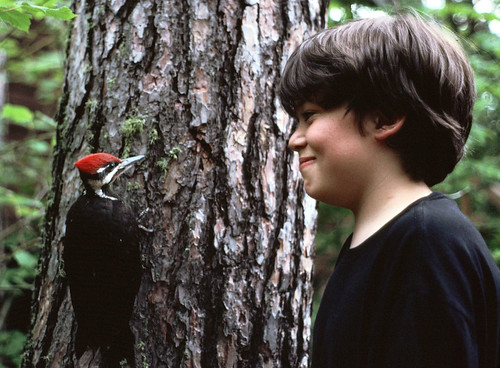 In November 2004, when I had my first digital camera, a Pileated was coming regularly to the little suet feeder stuck with suction cups to the window of my upstairs home office—I got a photo of him through the window, which made me happy despite how he’d gooped up the glass with his sloppy suet-eating habits. 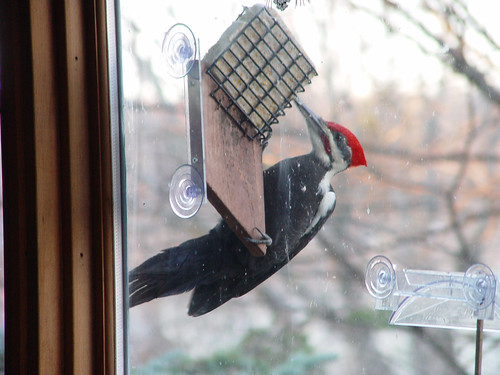 I nicknamed him Jeepers, and saw him a lot that winter because that was when a Rufous Hummingbird was also coming to my feeders. 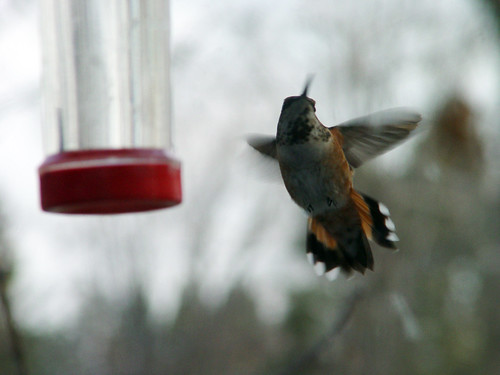 On December 2, we had a fierce blizzard, and I was in such a panic about my poor little hummer that I opened that window so she could feed inside my office. I had to wear my winter coat, snow pants, and gloves to work at my computer that day. In early afternoon, I looked out the open window to see Jeepers in the box elder tree right there. He stayed put long enough to give me the best photo of a Pileated that I was to take for years, as if thanking me for opening my house to the cold, hungry refugee. 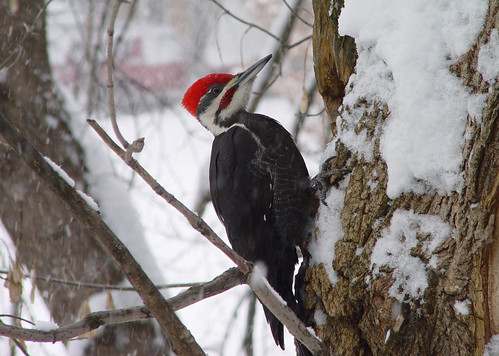 I’ve had a few opportunities in the past couple of years to take even better Pileated Woodpecker close-ups in my yard, because a pair has been hanging out in my neighborhood. This spring the male was working a big rotten natural cavity in the box elder in the side yard by the house—the same tree I’d photographed Jeepers in 14 years ago. I think he and the female were taking turns roosting in that cavity at night sometimes, because one or the other would appear in the tree at dawn, way earlier than I usually see them. 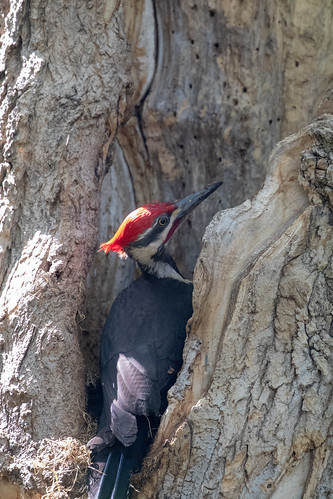 Last month, right after we had a new window put in in our dining room, I got some nice photos of both birds at some of the feeders in the side yard. I thought this was as good as it gets—how could I possibly get better photos than those? 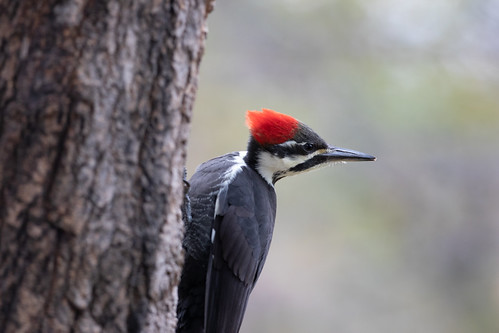 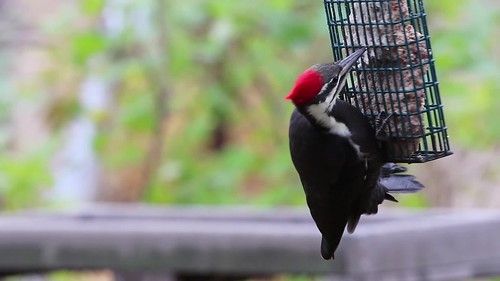 Then last week when the male was in the suet feeder in my backyard, I took a bunch of photos of him on rapid burst, and one caught him in mid-blink, revealing both his eyelid and his nictitating membrane. Unlike in most birds, which close their eyes with the larger lid below the eye, or as owls and we humans do, with the larger eyelid above the eye, most woodpeckers have the eyelid sweeping closed from the front of the eye, which protects the bird's eye from flying wood chips. Surely that photo would be the best I could do as far as photographing a Pileated Woodpecker. 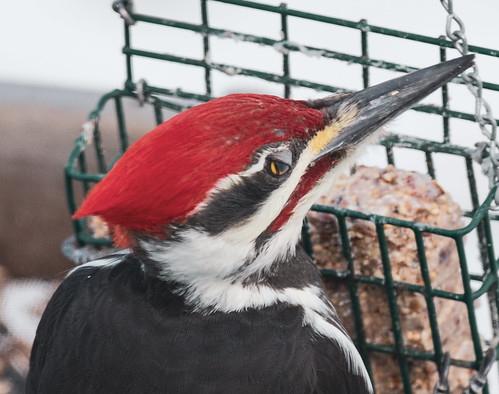 Then yesterday, the male spent a big chunk of the day in my yard, giving me three superb photo ops. First he was working on a cavity in my backyard box elder—not the one right next to the house but one I can see out the back windows. I cranked open the window and got both photos and videos of him working on that. 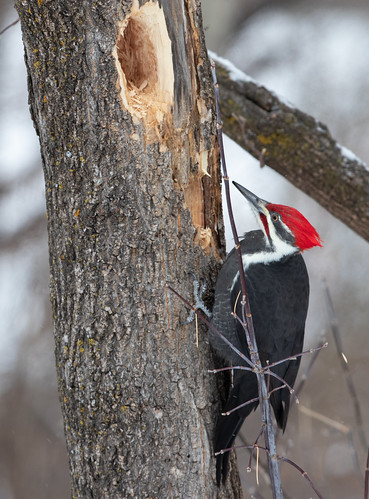 I thought that was going to be the best of the day. But when I went downstairs, he was in the peanut butter feeder in the side yard. I grabbed my camera and fired away through the new window glass, my camera on rapid burst. And WHOA! For the first time ever I got a shot of a pileated tongue—not just the tip but the whole long wormy thing—and the photo turned out really well. 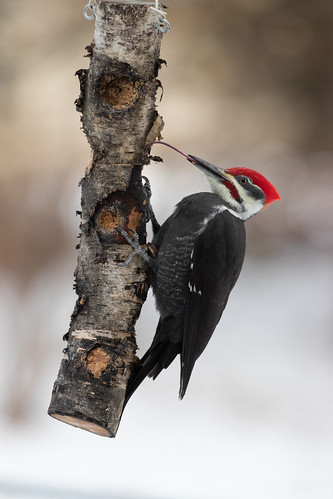 I’ve written a lot about bird tongues, especially the long, extruding tongues of woodpeckers and hummingbirds (such as this blog entry: More about Bird Tongues than a Normal Person Would Want to Know), but I’d taken only a couple of decent photos of Ruby-throated Hummingbirds sticking out their tongues before yesterday. I’ve been trying to capture the moment a Pileated Woodpecker sticks out its tongue for years, but the best I could manage was a couple of pictures barely showing the tip. This one turned out better than I ever dreamed—the bird is in perfect profile, the tongue sticking out at full length. 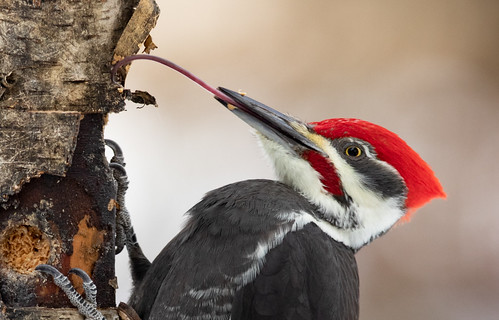 I got one last set of shots of him in the afternoon. Now he was at the suet feeder in my back office window. My 300 mm lens was at hand, and I had to step back to focus, but it was at such close range that I got a close-up of his face. That photo isn't cropped at all. 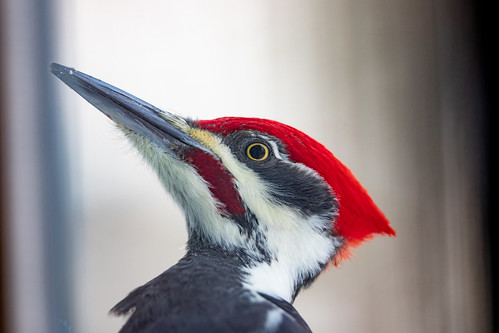 I’ve never had a day offering such a variety of pileated poses, and to have finally managed to get one of a pileated tongue! I have no idea why this one male Pileated Woodpecker decided to give me such an extraordinary day, but I sure enjoyed it, both in the taking pictures and in the enjoying them afterward. I never named this particular Pileated Woodpecker, but surely he’s my best bird EVER! 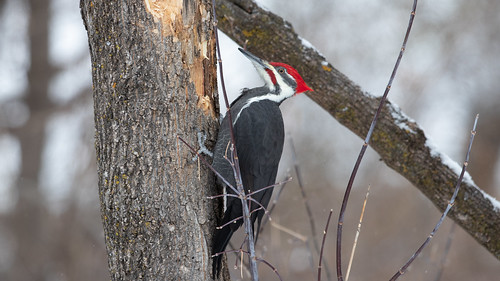 You can see all of "Laura's Best Bird EVER!" posts linked here.
Laura Erickson at 7:24 AM
Share
‹
›
Home
View web version