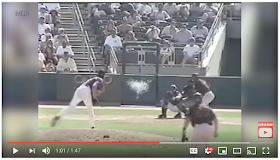 Back during baseball spring training in 2001, Randy Johnson, the amazing left-handed pitcher for the Arizona Diamondbacks, was up against Calvin Murray of the San Francisco Giants in a preseason game. His pitch was almost certainly over a hundred miles per hour, but just before the ball made it to the plate, it seemed to burst into a crazy explosion of feathers. Randy Johnson’s pitch had collided with a dove. The umpire called it a “no pitch”—almost certainly the most famous “no pitch” ever called, though I suppose the call could have more literally been a fowl ball. (You can see the pitch, including in slo-mo, here in YouTube.)

Randy Johnson had a long, illustrious baseball career, winning the Cy Young Award five times and amassing the second-most strikeouts of any pitcher in baseball history. He’s one of only five pitchers who have pitched no hitters in both leagues, he’s won at least one game against every one of the 30 major league teams, at forty he was the oldest player ever to pitch a perfect game, and he’s one of the tallest baseball players ever at 6’10”. The season he hit the Mourning Dove, the Diamondbacks won the World Series against the Yankees, and Randy Johnson pitched three of the winning games, so he was named a World Series MVP, too.

Yet despite all those accomplishments, there are more Google search results for "Randy Johnson bird" than there are for "Randy Johnson baseball.” He retired in 2010 and returned to a passion he’d nurtured as a photojournalism student at the University of Southern California. Randy Johnson Photography honors the poor dead bird in its official logo.

I vaguely remembered the story from 18 years ago, but I think at the time I’d decided it was too sad and brief to support a whole radio program. In 2016, for the 15-year anniversary of the mishap, Newsweek interviewed several ornithologists about it. They agreed on the species identification, but they noted that several gulls have also been hit by baseballs over the years, not during the pitch but after the ball was hit by the batter, and also that one bird that looked like a swallow was once hit by a pitch in a minor league game. Henry Streby, a researcher at the University of Toledo, recounted when the famous model Fabio, while riding on a roller coaster, was hit in the face by a flying goose—the goose was killed in the impact. Streby said, “Everyone talked about poor Fabio, but imagine how the goose felt!”

When asked “How fast would a ball have to be going to knock off a bird’s feathers like this? It looks like the bird exploded,” Streby responded, “A baseball is a dense 5.25 ounces. A mourning dove is about the same mass, but larger and much less dense. The bird is always going to lose a collision like that even with an off-speed pitch, and a poof of downy feathers would always be the result of a direct hit.”

Jerry Jackson, of Florida Gulf Coast University, said about the explosion of feathers, “A peregrine falcon hitting a mourning dove. Same cloud of feathers—doves have very "loose" feathers. Indeed, they are capable of releasing a cloud of feathers sort of like "chaff" to escape a diving predator. This is a reflexive action called a “fright molt.””

One question was how probable was it that a pitch would kill a bird—one said it was a one in a million chance, another said it was astronomical. Gavin Leighton, postdoctoral researcher at the Cornell Lab of Ornithology, put actual mathematical reasoning into it. He said,  “This is an extremely rare event.... Since there are about 2,400 Major League Baseball games per season and about 250 pitches per game between both teams, and if we limit ourselves to thinking that this happened once in the last 20 years that we can be sure of—that amounts to 1 pitch in 12,000,000 pitches.” But if we were truly going to approach this empirically, considering that this has happened exactly once, even today, in all of Major League Baseball, but also taking into account that for some of those years there were fewer teams and games, it still happened just once in at least 50,000,000 pitches.

One question was, “Do you feel bad for the bird?” Three of the ornithologists said they did, all noting that at least it went quickly and probably didn’t know what hit it. One put the death in perspective, noting how many birds are killed by human-related activities. Another expressed even more sadness for any nestlings the bird was caring for, noting that this happened during nesting season. But Michael Wunder, associate professor at the University of Colorado, Denver, irritated me to no end by saying, “I didn’t feel bad for the bird. I’m an ornithologist who studies population demographics, which just means I am interested to know when where and how birds die.” Any fifth grader knows that a billion, or a trillion, times zero is zero. You can know a lot about how aggregates work, but without reckoning the value of individuals, you really don’t know a damned thing.

I missed the Newsweek story when it first came out and had forgotten all about the bird-killing incident until just last week, when The Onion published a story about the aftermath, titled “Diamondbacks Settle Long-Standing Civil Suit With Offspring Of Bird Hit By Randy Johnson’s Fastball.” The illustration showed a press conference with two Morning Doves at the microphone. 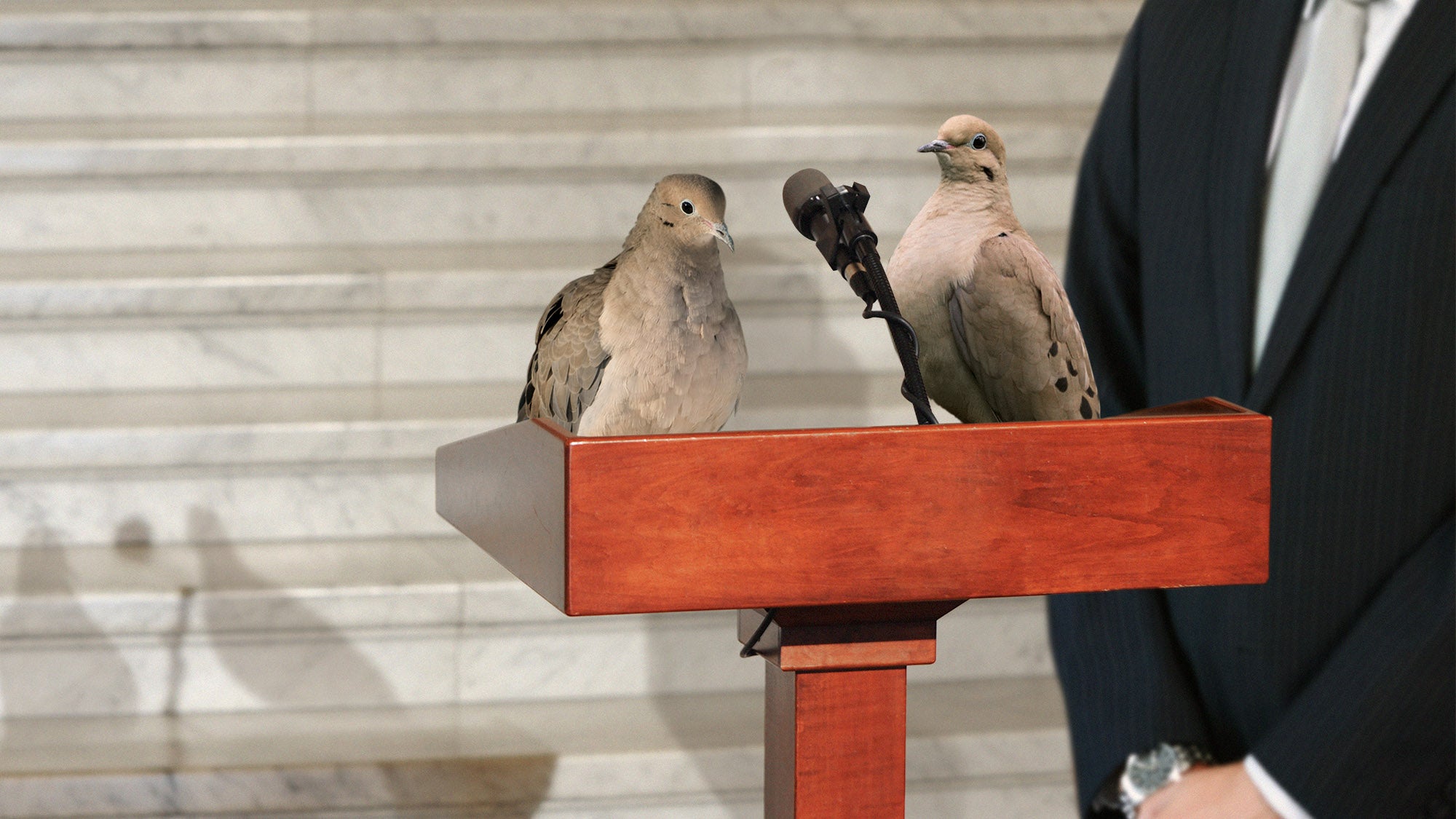 PHOENIX—Finally closing a sordid chapter in team history, representatives for the Arizona Diamondbacks announced Friday that the franchise had settled a civil lawsuit with the offspring of a mourning dove who died after being hit by a Randy Johnson fastball during a 2001 spring training game. “We know this was an unspeakably traumatic moment for this family of doves,” said attorney Doug Muhlenberg in a statement on behalf of the Diamondbacks, who went on to lament how long the case had been stuck in litigation and referenced a contentious period which saw a large flock of bird protestors demonstrating outside the courtroom. “While no amount of money can bring back their father, we hope they can move on from this ordeal knowing that justice has been served.” At press time, the Diamondbacks announced plans to prevent similar incidents by installing a mesh netting over the infield.

The Onion has a long history of doing hilariously spot-on bird stories, so this shouldn’t have surprised me. They of course got the species right, and based on the accompanying photo, they also got the likely number of offspring right—Mourning Doves usually lay two eggs in a nest. But when I showed my husband Russ the article, he immediately said that the incident happened 18 years ago—it was impossible that any of the bird’s offspring could still be alive. But of course they could—Mourning Doves happen to be exceptionally long-lived. Banded iIndividuals have survived 19 years 4 months, 27 years 3 months, and even an astonishing 30 years 4 months. So in The Onion's universe, it's quite possible two offspring of the bird could still be living and finally getting closure from their tragic loss.

The Onion didn’t say what the settlement gave the doves beyond an apology and a vague promise of the Diamondbacks taking action to prevent such a thing from ever happening again--even without netting, so far so good. But perhaps Mourning Doves can take enough comfort in this settlement that one day they'll be able to change their name to something more cheerful. Africa has its Laughing Dove; Australia and New Guinea their Peaceful Dove; Samoa, Fiji and Tonga their Friendly Ground-Dove. But no country has a Happy Dove. Mexico has a Happy Wren and many Mourning Doves migrate there for winter. Perhaps one can carry that felicitous name across the border so we in the U.S. can soon have our own Happy Dove. 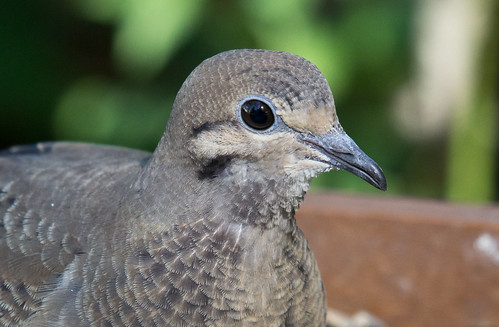