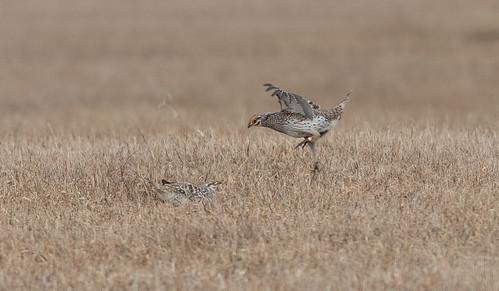 Last Wednesday (April 17), I woke up at 3 am, packed up my camera, recording equipment, and little dog Pip, and headed to Oulu, Wisconsin. A really nice guy named Tim Ciembronowicz had emailed me, telling me about an open field with some displaying Sharp-tailed Grouse, and I wanted to get photos and sound recordings.

I love all the prairie grouse—the two species of prairie chickens and two species of sage grouse, and of course the sharpie. But there’s something special about Sharp-tailed Grouse that fills me with joy. I don’t know if it’s their psychedelic colors—those 60s shades of purple and orange in the inflatable air sacs on their throat and eyebrows—or the amazing rattling sound they make when stomping their feet, or the pointed teardrop tail that males hold fully upright while displaying so their the cottony white undertail coverts stand out like beacons in twilight. Like other grouse, these birds are popular quarry for all kinds of hunters, avian and mammalian, and like most game birds, females produce many chicks per season in order to keep their numbers stable. But as a grassland species with special habitat requirements, Sharp-tailed Grouse are declining despite their high reproduction rate. In Wisconsin, they are dependent on young, open pine and oak barrens and savanna ecosystems. Historically, they were found throughout the state, but due to habitat loss and fragmentation, most sharp-tailed grouse in Wisconsin are now found only in the northwest. Minnesota has seen a massive decline since 1963, and here it’s listed as a Species in Greatest Conservation Need. I see them regularly in the Sax-Zim Bog. About one-third of the entire North American Sharp-tailed Grouse population lives in North Dakota.

The spot Tim told me about is half a mile from a county road and over a mile from Highway 2, but my microphone picked up constant traffic sounds. Fortunately, I set up the microphones close enough to where the birds would be displaying that the background noise wasn’t too disruptive, but as usual whenever I record birds, it hits me just how noisy we’ve made this world.

When I first arrived before sunrise, five males and a female were on the lek, but only four males returned after a harrier scared them off. My best recordings are of the four males. They made lots of vocalizations, but didn’t do the coolest foot-stomping display very much. What you’re hearing in the background is my recording of these birds. I also got a nice recording of an Eastern Meadowlark song.

I stayed in my car, using it as a blind, too far from the displaying birds to get good photos. But even extremely cropped, I could see that at least two were wearing some hardware on their breasts, and at least one had colored leg bands. Tim told me that they were originally part of a group of 64 Sharp-tailed Grouse translocated to the Moquah Barrens in 2018. He and his son have now also seen small leks in a couple of other spots in the area.

I’m going to be out of town for over a week, and Sunday evening was my last opportunity to see them until I get back. Grouse mostly display in the morning, but a few are often on the lek at the end of the day, too, and sure enough, there were two there, but the light was already so low at 6:30 due to the heavy clouds that my photos were horrible. So I’ll try again the first week of May. Even if no grouse show up, there are lovely birds there, worth looking at and listening to.
Laura Erickson at 10:02 PM
Share
‹
›
Home
View web version