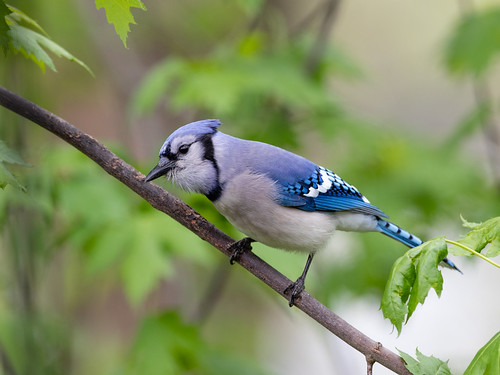 A couple of weeks ago, I spent a weekend with a charming young lady named Sabria. She’s taken with a bird that I’m very fond of myself.


My name is Sabria and my favorite bird is the Blue Jay because it has a crest and it’s like meaning “I’m the ruler of the world!”

You’d think Blue Jays would be satisfied with how gorgeous and intelligent they are, but their spunkiness is also beyond compare, and that jaunty little crest somehow accentuates their attitude, making them indeed seem to proclaim that they are the rulers of the world. When a jay is squawking its head off, you can bet money that its crest will be fully erect. But when a jay is physically crestfallen, it’s not literally so. Merriam-Webster defines crestfallen as dejected, sad, or disappointed, but when a jay’s crest is down, it’s sharing a convivial meal with flock mates, enjoying a tender moment with its mate, or spending time with its young. That lowered crest for a Blue Jay indicates that it’s happy and contented. I suspect the bird that inspired the dictionary meaning of the word crestfallen was the rooster—those lower in the barnyard pecking order do tend to have droopy crests and are probably dejected, sad, or disappointed about their station in life.

Our good old Blue Jay is the only New World jay exhibiting latitudinal migration—some jays in the mountains do exhibit altitudinal migration, but otherwise, American jays like to stay put. Blue Jays can be found throughout their range year-round, yet we can also observe major migration movements every spring and fall. I don’t think Blue Jays chose a migration strategy specifically to bewilder ornithologists, but then again, maybe they did.  Virtually everything about Blue Jay migration is poorly understood. We know that some individuals are usually present year-round throughout the range and that at least some individuals depart during spring throughout the range, except from peninsular Florida and the Gulf Coast. We also know that some jays that leave an area in autumn may be replaced by those migrating from farther north, but many jays are resident year-round; the proportion that migrates is probably not >20% of the population even in northern parts of the range. On good autumn days at Hawk Ridge, counters can count over a thousand, but no one knows where they came from or where they’re headed. It’s mystifying how or why such a conspicuous bird could keep so much of its life secret. Here in Duluth, I seem to see the most spring flocks moving in mid-May, but after going weeks without seeing one in my own neighborhood, I started seeing and hearing at least a couple last week.

Older bird books often mention that Blue Jays usually or often build a false nest before getting down to business, but this is almost certainly only when they feel that the first nest was in jeopardy—when a cat briefly climbed one tree where jays had been busily constructing a nest, they immediately abandoned it. It’s quite likely that the people reporting false nests were the very ones who made the jays move to a new nest site.

Blue Jays almost definitely nest only once per season unless something destroys their first eggs or young. Some observers have claimed that Blue Jays renest once or twice in a season, but there is absolutely no documentation that a pair has ever started a new nest after rearing young that fledged successfully. Jays stay together as a family unit for a month or longer after the chicks fledge, keeping the parents plenty busy without starting a whole new brood. Teaching one to five young birds how to raise a ruckus and yell convincingly that they’re king of the world takes time and work. My friend Sabria sure picked a cool favorite bird.