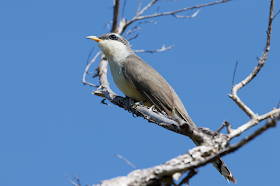 Russ and I are spending a week in Florida, visiting our son and doing some birding. We spent three full days in the Everglades and Keys, mostly looking for Caribbean species such as Mangrove Cuckoo and Black-whiskered Vireo. 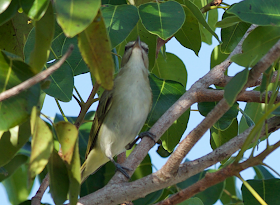 I like birds of all kinds and photograph whatever birds I see, so I took plenty of photographs of common and even domesticated birds, too. Russ is very indulgent of my birding habit and asks for very little in return, but whenever we’re in Florida City, we make one or two stops each day at his favorite fruit stand in the known universe, a charming place called Robert Is Here, famous for its amazing fruit shakes and smoothies, and for having an occupied Purple Martin house that is the farthest south in the United States.

After we get our order, we go in back to an informal zoo, where various domesticated ducks, geese, and chickens walk about with goats, parrots, and other assorted animals.

This time, I focused on a mother duck. She had traits of domesticated forms of both Mallards and Muscovy ducks, and some of her tiny ducklings were pure yellow while others were the more typical combination of yellows and browns of baby Mallards. I walked close to make a video of the family with my cell phone. I was so focused on the ducks that I didn’t notice that I was actually making a suspense movie.

A turtle that I hadn't even noticed was also focused on the little family, and started stalking one of the baby ducks. Unlike me, the mother was aware of it and was ushering her babies out of the water when suddenly the one baby started peeping piteously and struggling against the turtle, who was trying to pull it under. The mother noticed and went ballistic, attacking the turtle until the baby was released and scrambled up out of the water. It instantly sat down, so I couldn’t see whether the turtle had damaged one of its feet, but I didn't see a trace of blood where the baby duck climbed up, so am hopeful the mother rescued it in time. 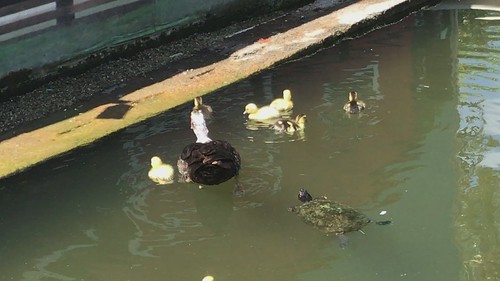 I can’t see my cell phone screen very well in bright sunlight, so I hadn’t even realized what I was taping until the woman next to me yelled out. I kept the camera pointed the right way until the entire family was ashore, but it wasn’t until that night that I looked at my video and realized my cell phone had captured everything—the turtle following the ducklings, choosing one and swimming straight for it, and the little guy struggling against it. I hadn’t heard the duckling's peeps while it was being attacked, but my phone captured it all. 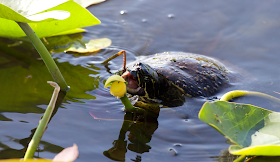 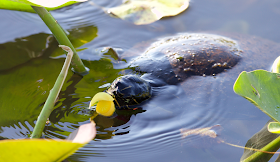 But like people, turtles are omnivorous, eating plants and meat both. And baby ducks are defenseless against predatory turtles and fish—this is why we tend to see so very many tiny ducklings following their mother, and then smaller and smaller broods as the ducklings get older.

Twice in my years of birding, I’ve seen a tiny duckling disappear before my very eyes, pulled down into the water by something lurking below, but I’ve never before actually watched, much less videotaped, a predator in action. Predation is the natural order of life on earth, and without turtles and fish, ducks would soon take over the world. But I’m really glad that when I finally got to see a turtle preying on a baby duck, the mother was right there to save the day. Turtles have to eat, but warm-blooded mothers, avian and human both, have an equally natural instinct to nurture and protect babies. I’m thrilled to have made such an exciting video, but even more thrilled that it had a happy ending. No duckling snuff films for me.