I’ve been out of town for over a week, so my only experience with Duluth’s recent snow and cold has been vicarious, when I talk to Russ every night and via news on social media. Today it’s sunny and just warm enough to be perfect in New York City, so I feel bad hearing about frigid conditions in Duluth. I've been getting emails about unusual birds showing up at bird feeders, like Todd writing about an Indigo Bunting in Duluth “The cold, strong wind seems to have him grounded and chilled today.” I’ve seen lots of photos of hummingbirds, Rose-breasted Grosbeaks, and warblers against a snowy background. I’m sad that I’m not around to see what shows up in my own yard and that I can’t be there to make sure my backyard birds are getting nutritious fare when the weather is leaving both resident and migrant birds so stressed. A pair of chickadees is nesting in Russ’s old cherry tree—the decrepit, dead tree we were planning to chop down this spring until I noticed the chickadees—now I’m worried that the young will fledge before I get home June 8th.

Such cool birds are making me feel like I’m missing out. Rarities always show up during spring migration, but the weather is certainly contributing. I missed this year's usual yet thrilling influx of Bonaparte’s Gulls and Red-throated Loons. It’s not at all unusual to see a Whimbrel or two on the ball field or beach on Park Point, but on the 21st, a full 79 were there.

My friend Don Kienholz had a Black-throated Blue Warbler visiting his jelly feeders. I’ve only seen this species at a feeder once in my life—that was in Cuba at the feeding station where I saw my lifer Bee Hummingbird. It would be fascinating to learn if the ones that use jelly feeders in Cuba are more likely to notice them up here. 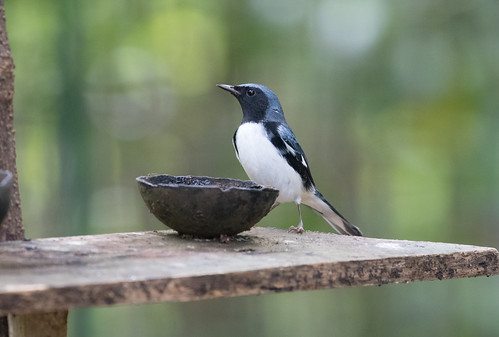 Cape May Warblers were also visiting feeders this week—I’ve had them in my own yard coming to jelly and to oranges, only during cold days in May, so I don’t see this every year.

This week a rare Summer Tanager turned up north of town. Even more exceptional, a Yellow-throated Warbler turned up in Duluth—some nest in southernmost Wisconsin and southeastern Minnesota, but that’s as far north as this Southeastern species should ever be.

The Pink-sided form of the Dark-eyed Junco, which belongs in the Rocky Mountains, showed up in northern Wisconsin Monday, and a gorgeous Audubon’s Warbler—that’s the western form of the Yellow-rumped Warbler—turned up on one of the Chequamegon Bay Birding Festival field trips Saturday.

Tuesday, the day I left, a Hooded Oriole, a bird from the extreme Southwest, turned up in Sanborn, Wisconsin. It would, of course, have been new for my Wisconsin list.

On Sunday, a Painted Bunting turned up in South Range, Wisconsin. I actually saw one in Tomahawk back in 1982, and another in Douglas County in 1983, both long before I was photographing birds. I’d have sure jumped in my car and gone to South Range to see another!

A White-winged Dove turned up and stuck around in Two Harbors for over a week. I got several nice photos of one in Kissimmee, Florida this spring, but would never ever have expected one in Lake County, Minnesota. When I started birding, even Florida White-winged Doves would have been unheard of. They were once fairly restricted to desert thickets, specializing on saguaro cactus seeds. Now they’ve become common in cities and towns across the southern U.S., and seem to be expanding northward as well. I don’t know if they’ll compete with Mourning Doves—I hope not, because they’re shockingly colorful and lovely, so I’d just as soon welcome their natural expansion rather than worrying about what they’re doing to our long-time native birds. 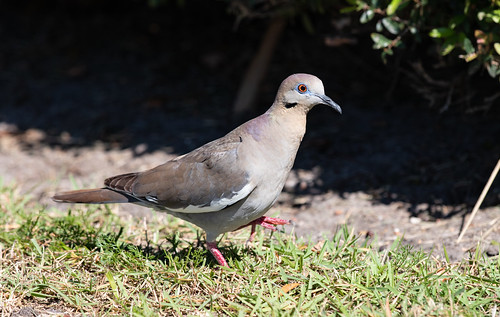 My extended road trip involves three birding festivals—the one last weekend in the Indiana Dunes, and one this coming weekend in Freeport, Maine, sponsored by LL Bean and Maine Audubon.


Then I'll be helping with field trips at the Acadia Birding Festival in northern Maine the following weekend. On the way home on June, I’ll also be a speaker for the Thursday Evening Program series at the Ottawa National Forest Visitor Center in Watersmeet, MI, on June 6th. Then I'll get home June 7. By then, the wintery weather should be over and all those vagrant birds should be back where they belong. I'm sorry I'm missing it.