I just spent the weekend in Porter, Indiana, and at the nearby Indiana Dunes State Park and the brand-new Indiana Dunes National Park at the fifth annual Indiana Dunes Birding Festival. Considering that I grew up in Chicago, it’s embarrassing that I’d only been to the dunes area once before in my lifetime, before I became a birder, so the wonderful avifauna was entirely off my radar. Russ and I went there for our prom picnic in 1969—exactly 50 years ago this month—and it was apparently romantic enough to seal our relationship, as it seems to have been for the many pairs of Sandhill Cranes I saw this weekend. But unlike the cranes, we never returned.

This time I didn’t actually get to any of the beaches. My first morning, I went birding along a lovely boardwalk and into the woods with a couple of friends—the big draw was a pair of nesting Prothonotary Warblers using a nest box that was quite close to the boardwalk. 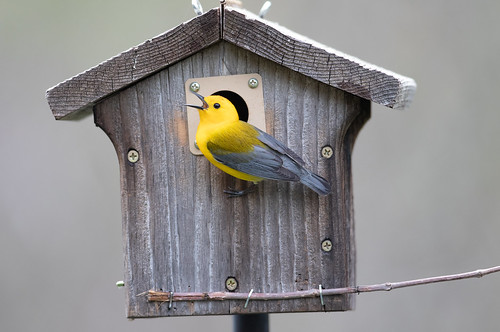 That morning there were lots of people looking at the Prothonotaries, so I returned early the next morning to have them to myself and get a bit of a recording. Then, in a nice hilly area of the woods just beyond the boardwalk, a Worm-eating Warbler sang out loud and clear—he must have been close—but after just two songs, he shut up and I couldn’t find him anywhere. I’d pulled out my cell phone to try to get a recording, but too late. We don’t get Worm-eating Warblers in northern Wisconsin or Minnesota, so that was such a treat that I bought a gorgeous art print by Kristina Knowski to commemorate the event.

Saturday I helped with a field trip that visited several places in the state park. We had a few Golden-winged Warblers singing from close enough range that I could actually hear their entire song—usually I miss the first note and often the rest of it, too, so this was a treat. One Blue-winged Warbler also sang persistently. And Wood Thrushes were everywhere, filling me with joy. Their song is ethereally lovely, and hearing so very many gave me a rush of contentment and happiness.

A lot of top-notch birders pooh-pooh festivals, preferring to find their own birds on their own schedule. But birding festivals have a lot to offer just about everyone. They provide visitors and new local birders a fine introduction to the best birding spots in an area, and the field trip leaders know the territory and the quirks of the birds living there. Birds vary by song and often some behaviors in different areas, so this can be very helpful to advanced birders, too. I often am listed as a field trip leader at festivals, but there is always a real leader who knows the places intimately—I’m just along for color commentary.

Most avid birders help out with their local birding festival, and get the word out when anything good appears, so a festival is a great way to see a lot of birds in a very short time. And almost as important as the quality of the birding, most festivals have a great human element as well. I was especially taken with the Indiana Dunes Birding Festival because there were so many talented people involved, from naturalists and bird banders to artists. The Friday night social included a bird-calling contest that was both fun and hilarious. A very high quality art fair showing dunes birds was on exhibit at the national park visitor center. And everyone I talked to was warm and welcoming.

My banquet talk was about my “Best Bird EVER,” and after I was done, I was shocked when a superb artist, Annie Aguirre, came up and gave me a wonderful sketch she had made during my program of several of the birds I’d talked about! Largest was my first bird, a most cooperative chickadee, with smaller ones of the Cuban Tody I had yearned for so long to see and finally got to after my heart attack, the Cedar Waxwing one of my students brought me that sat on my shoulder during a faculty meeting, freaking out the principal, the Pileated Woodpecker I rehabbed who liked to sit on my upper arm with his beak next to my ear, sticking out his tongue to trace all the folds of my ear, and the White Tern that I intentionally added to my personal “pooped upon” list by sitting under it while Russ and my kids tried to stay as far away from me as possible.


It’s such a beautifully rendered and fun drawing. I can’t wait to get it home and have it framed. I’ll treasure it as the best keepsake of all, so beautiful and yet so very personal. Now that I’ve been to the dunes as a birder, I’ll have to bring Russ back there. If those Sandhill Cranes keep returning, so should we.