I recently received an email from Lee Guthrie, who wrote:


I’ve been listening to the house wrens in my yard. This year they nested in a house which I mounted on my porch. I have a long history with these birds going back to when I was a kid. They would build their nests of sticks in our newspaper box, completely filling it. Their call is one of the cheeriest and one of my favorites. It's amazing how such a strong, prolonged song can come from such a tiny bird. They aren't being scrappy at all. My question is, why are they continuing to sing so much right now. I believe their young are out of the nest so I don't understand why they continue to bring attention to themselves.

Lee is absolutely right that the first batches of baby House Wrens are out of their nests now. “Empty nest syndrome” strikes different birds in different ways. In House Wrens, even though those fledglings are still dependent on their parents for food and learning how to negotiate life, the mother often wanders off in rather a midlife, or at least midseason crisis, attracted to a new male singing. Meanwhile, the father faithfully feeds the young even as he starts singing again. That attracts a new mate—usually another female wandering after raising her own batch of nestlings. He shows her the cavities on his territory, she picks one, and soon she’s laying eggs. None of this is too time-consuming for him even as he continues feeding and educating his original brood. By the time the new eggs hatch, that brood will be independent, and he’ll be ready to focus all of his attention on the new brood.

So that answers Lee’s question—when the young are out of the nest, the male must call attention to himself to attract another mate. Both males and females maximize the number of offspring they produce using this system of serial monogamy. But Lee managed to put a lot more into the email than that simple question. There’s something so warm and homey about House Wrens—how they select all kinds of sites for their nests, from bird houses and newspaper and mail boxes to an old sneaker sitting out on a picnic table or a pocket in a pair of overalls hanging on a clothesline. It’s the male who builds those nests of sticks, and he hardly ever stops at one, or even two. The more cavities he takes over and marks as his own with those sticks, the more likely one will be accepted by a future mate so he can raise a second and maybe even a third batch of young in a single season.

The male stuffs the nest cavity with sticks, which seem to provide a barrier keeping out predators and competitors. The female constructs the actual cup nest in a depression in those sticks. House Wrens often incorporate spider egg sacs into the nest, probably so emerging spiderlings will eat mites and other nasty parasites that build up in the cozy nest during warm weather.

House Wrens weigh 10–12 grams—the weight of two nickels, sometimes throwing in a dime for good measure. That entire tiny body quivers with the effort or excitement of producing that loud, robust song.  We mere humans don’t know how to translate the meanings and nuances of bird vocalizations, so we can’t be certain that singing House Wrens feel cheerful, but hearing that warm, bubbly song sure arouses good cheer in us. 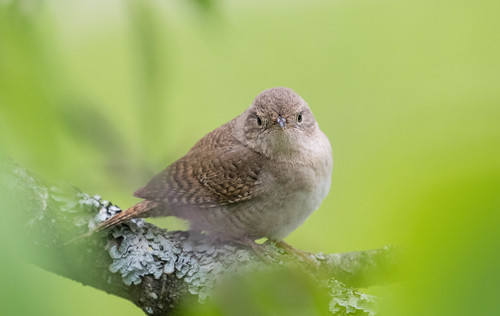