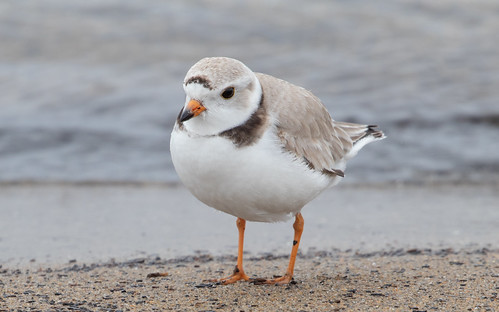 Today, November 18, 2019, has been designated Piping Plover Day in Illinois, honoring Monty and Rose, the plovers that raised two chicks on Montrose Beach in Chicago this past summer, the first time since 1955 that this endangered species nested within the city. The governor’s proclamation reads:


WHEREAS, two endangered piping plovers, “Monty” and “Rose,” became the first piping plovers to nest in Chicago in 64 years this past summer; and,

WHEREAS, there are only 70 pairs of endangered Great Lakes piping plovers remaining; and,

WHEREAS, nearly 200 people volunteered their time throughout the summer of 2019 to protect these birds, educating hundreds if not thousands of beach goers; and,

WHEREAS, Monty and Rose nested in Waukegan in 2018 and a film has been made about them which will debut on November 18; and,

WHEREAS, plovers are particularly susceptible to the effects of climate change and habitat loss;

The festivities started yesterday, with a Montrose Beach cleanup. Today there are several bird walks and also a beach cleanup at Waukegan Beach in Lake County, where Monty and Rose nested last year. In true Chicago style, that group will finish the day at a bar, raising a toast to Monty and Rose. Of course, neither they nor their young will be sharing in the festivities, due to both their being underage and to their having flown the coop—they migrated south in August.

Perhaps the biggest event today will be the very first screening of a documentary about Monty, Rose, and their young, and what so many Chicagoans did to help them bring off this historic feat. The film, produced by Bob Dolgan, is scheduled to have five screenings altogether between today and December 11—all have been sold out for quite a while. The sixth and last scheduled screening, on January 13, may still have seats.

To learn more about this wonderful pair of birds and everything that Chicagoans did to protect their nesting efforts, check out the Chicago Audubon website.