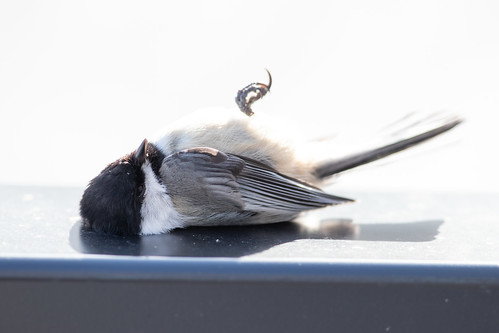 I’ve received several emails this fall like the one I received from Shenda Skalski and her daughter Ella K. They write:

>We live on Stingy Lake north of Nashwauk by Side Lake, McCarthy Beach area. Have owned our place since 1994. We used to have to fill our 5 bird feeders 2x daily!! Now, we barely see a bird and have not filled our 3 feeders once in 2 months!! We also barely saw a duck this summer!! We used to have almost 25 baby ducks in our yard at a time...several Mama mallards trusted our home as safety to rest.

I’ve heard from several people with similar concerns. The day after Duluth’s Christmas Bird Count, when I had a horrible time finding chickadees, I got an email from a woman named Alice who wrote:

>This is first winter since I moved up to NW Wisconsin that I see NO chickadees! Usually MANY. What’s going on???!

My own dwindling backyard birdlife is certainly consistent with these observations. As a 68-year-old who has been an active birder for almost half a century, keeping track of my backyard birds here on Peabody Street for over 38 years, I’ve watched a steady decline in a great many species. My starting point for my own observations came in 1975, after big drops in bird numbers during the time DDT was being heavily applied in many areas in the Fifties and Sixties. Some of those species—in particular, robins, Bald Eagles, Ospreys, and Peregrine Falcons—have recovered since DDT was banned in the United States. Others have been declining steadily. Some of the most dramatic declines involve grassland species, or other birds with specific habitat needs.

This September, a study found that 3 billion birds have been lost in the U.S. and Canada since 1970. Suddenly people were shocked and distressed, though we’ve long known that roughly a billion birds a year are killed by domestic cats, and another billion by collisions with windows. There is a lot of magical thinking engaged in by conservationists about some mythical “surplus population.” Many species do have what we could think of as “extra” individuals not able to claim and defend their own territory, but out there waiting in the wings just in case a bird on territory gets killed. Well over a decade ago, Sidney Gauthreaux, using radar records, discovered that movements of migrating birds over the Gulf of Mexico had declined about about 50 percent between the 1960s and 1980s, and another 50 percent between 1980 and 2000. Many conservation biologists pooh-poohed his research because, although they, too, had detected declines using Breeding Bird Survey data, they didn’t see such a dramatic change. Birders actually had seen enormous declines already in the magnitude and number of warbler waves during migration, but biologists said we were using subjective impressions not supported by science. When Gauthreaux actually used science to prove the decline was larger than they had thought, rather than take it seriously, they shot holes in his work. This newest study is using radar data, with some of the same researchers who had pooh-poohed Gauthreaux now taking credit for their “discovery.”

Daniel Pauly at the University of British Columbia in Canada, called the problem of forgetting past natural abundance, or of new generations not knowing about it, “shifting baseline syndrome.” People seeing their first good warbler waves can’t help but thrill at the variety and numbers, without having a clue that those of us watching these waves in the 60s and 70s were seeing many more of them, with most waves including many more individuals. Yes, there is always some nostalgic coloring exaggerating memories, but in the case of birding, these memories are borne up by field notebooks of those keeping track of numbers from back then—another tool being used today as data from some of these old notebooks are entered into eBird.

Birds are indeed declining, dangerously, and attention must be paid. This week I’ll be writing about why the declines are taking place and what we can do about them.