Birds are declining dangerously. Not all species, of course. Urban and suburban populations of Canada Geese are higher than is good for us humans or the geese themselves. The same is true with regard to turkeys. Ironically, in both of those cases, overpopulation is not just due to human-altered habitat changes that are helpful to these species to the detriment of other species, but also due to the fact that a great many states’ natural resources departments reintroduced, or introduced in the first place, geese and turkeys for the benefit of sports hunters, despite knowing how harmful that has been with regard to augmenting populations of white-tailed deer and bringing in feral hogs to please hunters. In all these cases, hunting has not been enough to keep these populations in check, primarily because all these game species benefit from the way habitat is managed and the way humans alter habitat in urban, suburban, and rural areas. Managers focused on wildlife for hunting tout the “edge effect” and dismiss the importance of large, uninterrupted tracts of forest and grassland for the species that need them.

Over the years, several hunters have told me that if you want to protect an endangered species, all you need to do is make it a game species, because hunters ensure that the species they hunt for sport are properly managed. But all you need to do is look at Northern Bobwhite and sage and prairie grouses to see that that’s entirely wrong—those game species are all dangerously declining. Captive-reared bobwhite from game farms and retriever training clubs do show up even in my own neighborhood occasionally, and this summer one bobwhite was calling persistently on Kinney Valley Road in Port Wing, Wisconsin, but this is much too far north for these escaped birds to survive. They once were abundant in several birding places where I could count on seeing lots of them—now I usually miss them entirely.

But finally, virtually all ornithologists, conservation biologists, and others agree that the magnitude of loss of so many birds of so many species is not sustainable. Some of this is clearly due to habitat loss, but that makes it sound like a simple matter of using better management on public lands. We’re losing a lot on that front as states and the federal government cut back spending for knowledgeable and effective wildlife managers and on protecting public lands themselves. Back several administrations ago, money for Duck Stamps started covering the cost of temporarily leasing habitat rather than purchasing it outright, enriching landowners until they could find more lucrative, often environmentally destructive, uses for that land. Now just about all Duck Stamp funding is used for temporary leases, not outright purchasing quality habitat for our children and our children’s children.
When small landowners ran America’s farms, they learned farming techniques to minimize or prevent erosion, and also learned to leave hedgerows where they couldn’t plow or harvest anyway. Some individual farmers flagged at least some bird nests so they wouldn’t mow them down. But we’ve lost a lot of birds that farmers used to enjoy—meadowlarks, bobolinks, harriers and short-eared owls have dwindled as mowing schedules advanced earlier and earlier into the nesting seasons, and farm cats have always taken a toll on songbirds as well as the rodents they ostensibly help control.

Outside the major tracts of public and agricultural lands, we’re eating up habitat so more and more people can live away from more and more people. Thoreau wrote “In wildness is the preservation of the world.” That is absolutely true, and it’s equally true that in cities is the preservation of wildness. As our own species’ numbers mushroom, we need more, not fewer, people concentrated in cities to save what’s left of wild areas. That of course requires us to support every effort to make cities livable for everyone.

When I started doing my Breeding Bird Survey route in the 1980s, much of it was along old logging roads, with no houses anywhere near, and no traffic. But more and more of that was bought up for people who want to live out of town and don’t mind commuting 10 miles to Two Harbors or 30 miles to Duluth. Indeed, three times during the time I had that route, between the 80s and 2007, they had to reroute me three times as logging and rural roads were transformed into major thoroughfares carrying more and more commuters, compromising data quality because of the noise and making the roadside survey more dangerous. Ironically, moving the route like this also compromises the data, because the original routes were randomly selected. Every time they reroute it now, taking it onto a less developed road, they’re skewing the data, making it seem like less development, alone with the avian changes that come with it, is happening.

I used to think people who moved to the woods relished the forest habitat, but a great many of the houses that have cropped up along formerly forested areas of my survey routes have large swaths of lawn and are planted with exotic ornamentals rather than native trees and shrubs. And people with yards and gardens use more pesticides per acre than farmers do—pesticides have led to enormous losses of beneficial insects and to the birds that depend on them.

Given all the problems birds are facing—and I haven’t yet touched on climate change, which is already leading to enormous losses and promises to get even worse—you’d think there was no hope of making things better. But there is. In coming days I’ll talk about what we can and must do, individually and collectively. 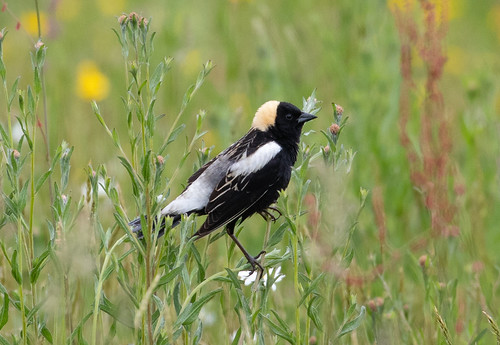