Just about every child wonders at some point how other species, and even other humans, perceive colors. Do a blue sky and white clouds look the same to everyone who isn’t colorblind? Sure, we humans all have pretty much the same eye structure, but in the same way that a joke could be hilarious to one person but fall flat to an identical twin, maybe colors look different to different people, too.

I was pretty sure I had a good handle on color—I’ve always been able to appreciate the different shades of red in a Scarlet Tanager, Northern Cardinal, and Ruby-throated Hummingbird, and I love the lovely tropical greenish yellow of a Chestnut-sided Warbler in autumn and the subtle shades of pinks and purples in a Common Grackle in full sunlight. 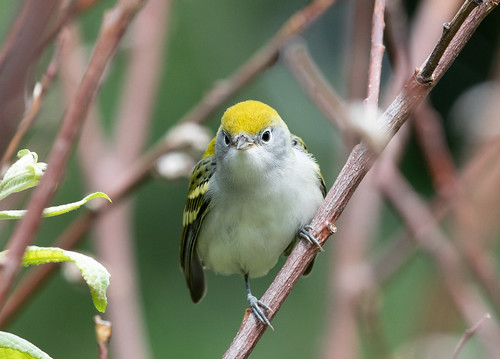 But now that I’ve had one of my cataracts removed, I’m discovering that the colors I see are different through that eye with its crystal-clear lens than through the eye still obscured with the cataract. I’ll be getting the second eye done on Wednesday, but during this interim period, I can actually use the magic of Lightroom and Photoshop to make two copies of the same photo, and then use a color sliders to show how the eye with the cataract sees it differently from the newly cataract-free eye. This is purely subjective and not at all scientific, but by switching eyes, I made the two photos on the left look the way my left eye sees it compared to how my right eye sees the same thing when I go back and forth between eyes.  I seem to see a more dramatic shift with the chickadee photo above than with this Blue Jay photo.

Meanwhile, last week, the British Ecological Society published a paper by Cedric P. van den Berg,  Jolyon Troscianko,  John A. Endler,  N. Justin Marshall, and  Karen L. Cheney in Methods in Ecology and Evolution titled “Quantitative Colour Pattern Analysis: A comprehensive framework for the analysis of colour patterns in nature.” We humans and many primates are trichromatic, meaning we have three kinds of cones in our eyes—sensitive to red, blue, and green hues—that allow us to see colors along the ROYGBIV spectrum. Most mammals, including dogs and cats, are dichromatic with just blue and green-sensing cones in their eyes. Arctic reindeer have a special cone that detects the UV light that lichen emit.

Bees are trichromatic, but also pick up UV light. Many insects, fish, reptiles, and birds have four kinds of cones, and the mantis shrimp can have up to 16 kinds of cones. Color perception is important for such essential tasks as detecting prey animals or vegetation types, noticing predators, and signaling their own kind for competitive, mating, or flocking purposes.

To better understand the function of colour signals in nature, the researchers developed quantitative analytical frameworks to estimate how animal and plant color patterns appear against natural backgrounds as viewed by ecologically relevant species. The program they developed takes a photo of how we see something and adds brilliant colors to the areas outside our own visual spectrum.

Of course, what we can see in any photo is limited to colors within the wavelengths our human retinas can see, so this is just a visual representation to help our understanding, not at all the way animals actually see the world—our imaginations really are limited to the colors within our own spectrum. The photos they’ve produced are brilliantly wonderful, but the popular press picking up those photos are saying “This is how birds see the world,” and “This software shows you exactly how different animals view the world” when it isn’t. We have no idea what colors look like outside our own visual range, so although this wonderful work is important and cool, it simply does not show “how birds see the world.” Until we humans can evolve retinas with more kinds of cone cells, the colors birds and other animals see will ever remain a mystery to us mere humans.