Northern Shrike at the Bog

When Russ and I went to the Sax-Zim Bog on Sunday, we spent a little time at the feeding station on Admiral Road. Not one chickadee or nuthatch showed up, nor even a Downy Woodpecker. This has been a hard year for seeing birds, but that’s not the reason tiny birds were so scarce. If I were a 10-gram chickadee, I wouldn’t come anywhere near the feeders right then, not when a Northern Shrike was lurking right there, watching the feeders.

Northern Shrikes are nicknamed "butcher birds" for their habit of impaling prey on thorns, barbs, and other sharp things like that. They usually survey their domain from above—almost all my photos of them are backlit as the birds sit on treetops or on powerlines. 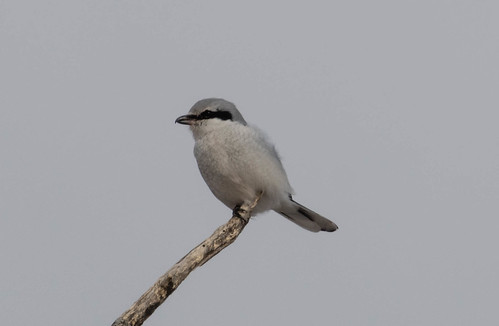 This particular bird may have noticed activity at the feeder from a high perch and decided it would have a better shot at some of those birds by sitting closer. I was across the road from it using a 300mm lens, so my photos are very cropped, but they’re the best I’ve ever taken for showing the shrike’s underside—it’s not white or very pale gray, as it looks in most of my photos. Rather, the whitish breast feathers are edged with soft gray, giving the bird’s plumage a very soft, gentle look—the avian version of a wolf in sheep’s clothing.

When we got there, two guys from Queens in New York were puzzling over it. They of course knew it was a Northern Shrike, but it has quite a different appearance from the Loggerhead Shrikes they normally see, which have a larger, much more pronounced facial mask and a beak that seems bigger somehow. Loggerhead Shrikes are southern birds with no need for all the feathers insulating their face and nostrils, so they can show off their beak with the killing tip without freezing their faces. They also are a purer white beneath, feather edging much subtler. 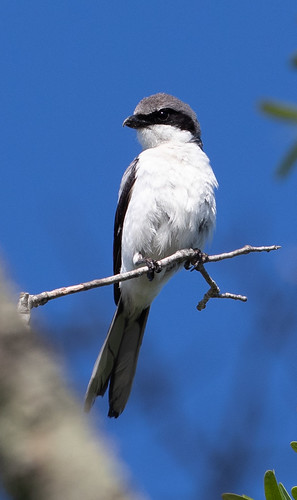 A great many songbirds are obligate predators, if we accept the truth that the insects, spiders, and other tiny invertebrates they hunt are animals. 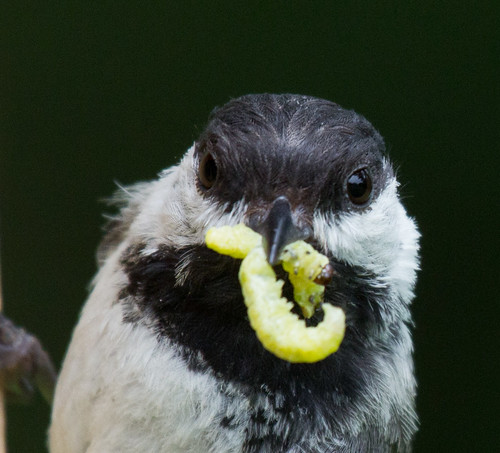 Shrikes eat insects in season, but both American species also eat a fairly substantial number of warm-blooded animals—that is, birds and mammals. And they don’t necessarily restrict themselves to tiny species. The only time I ever had a Varied Thrush in my backyard, it was chased off by a shrike, though Northern Shrikes average a bit smaller and lighter than Varied Thrushes. I don’t know how that particular interlude ended, but the thrush never returned.

The hooked tip on a shrike’s bill is the only lethal weapon it carries on its person, but it can use those thorns and barbs not only as meat lockers to store prey but also, sometimes, to finish an animal off. Weighing a mere 2 or 2 ½ ounces, shrikes have a fast enough metabolism that they can’t go without food nearly as long as large hawks or owls, so when the hunting is good, they cache away what they can against future shortages. 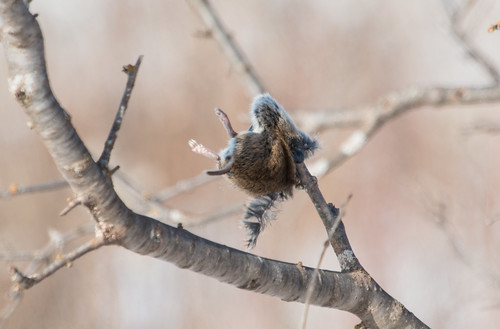 I’ve spent time with a lot of Northern Shrikes, but never heard them make a sound. Merriam-Webster says the etymology of the word shrike is “perhaps from Middle English *shrik, from Old English scrīc thrush; akin to Middle English shriken to shriek.” But I suspect any shrieking associated with shrikes is done by their prey, not them.

Back in the 1980s when my backyard was filled with birds every day, I saw shrikes fairly often in winter. Once in a while they caught a bird and sat eating it in one of my bushes. Chickadees would often alight in the branches above to scold, spitting out every swear word in a chickadee’s vocabulary—and believe me, they know a lot of naughty words! But even when filled with angry passion, chickadees know exactly when to move on—they’d disappear when the shrike was down to the last bits of food, before it could switch from feeding back into hunting mode.

Shrikes are almost always in hunting mode, so chickadees don’t get to voice their opinions right at them very often. But even during those brief interludes, neither the shrike nor the chickadees are shrieking. Sometimes people can’t help but shriek when a shrike gets one of their backyard finches or chickadees—I’ve even been known to do that—but somehow I doubt that it was backyard birdwatchers in the Middle English era who were shrieking at shrikes. And I certainly wasn’t shrieking at my cooperative and photogenic shrike in the bog Sunday. I sure don’t like it when one grabs one of my chickadees, and I don’t relish taking photos of them relishing their avian meals, but like everyone else, shrikes gotta do what they gotta do.