Blast from the Past: Sneakers and the Jumping Beans

In 1991, while I was a bird rehabber, I became permanent caretaker of a Blue Jay named Sneakers, who became my education bird as licensed by the U.S. Fish and Wildlife Service and the State of Minnesota. I wrote a lot about Sneakers during the 8 years I had her. This story, written at the time it happened in 1995, is one of my favorites.

I had gone on a birding trip to Arizona, and as a souvenir for my 9-year-old Tommy and 11-year-old Katie, bought home a little plastic box with some Mexican jumping beans. Authentic jumping beans are just regular old seeds from a Mexican shrub that belongs to the spurge family. A moth lays its eggs in the shrub's flowers, and when they hatch, the caterpillars burrow in the newly growing seeds of the shrub. As the seeds grow, they develop a hard outer wall that conceals the caterpillar inside.

The caterpillar eats the inside of the seed, and eventually builds a web along the inner wall. The seed jumps when the caterpillar grasps this web and jerks its body. Jumping beans remain active for several months, and then the caterpillar cuts a circular hole into the seed wall, forms a cocoon inside the seed, and turns into a moth. When metamorphosis is complete, the adult moth pushes through the lid, and leaves the seed.

So, anyway, my little box of jumping beans charmed and entertained Tommy and Katie for a full two minutes before they lost interest. I set it on my desk and pretty much forgot about it, until Sneakers the Blue Jay suddenly started squawking to beat the band. I came running, and found her yelling every Blue Jay expletive she could think of from her cage next to my desk, her crest fully raised.

Usually she stopped yelling and lowered her crest when I came in, but this time she kept yelling, looking intently at the little box of jumping beans and then back at me like Lassie showing Timmy the killer rattlesnake lurking in his bed. I picked up the box and showed the seeds to her, and she cocked her head this way and that, studying them, and lowered her crest a little. Suddenly, all three seeds jumped, clicking on the plastic, and up went her crest and she squawked again.

I took the seeds out of the box and held them in my hand. My body heat set them to jumping at a faster rate, but now she was more interested than angry or scared. This was the most novel thing she had ever seen—she'd gone her entire four-year-old life knowing darn well that seeds are inanimate objects, and now her universe was toppling.

I explained to her about the caterpillars, and although she didn't understand a word I said, my tone reassured her. I gave her a little piece of wood about the size and color of one of the seeds and she hacked it into a bazillion pieces with a fury I'd never seen in my sweet little Blue Jay. It seemed the height of rudeness to give her one of the actual seeds after the little caterpillars had already been taken from their home and lugged on a long plane trip.

After a few days, she got used to the seeds, but until the larvae pupated and the beans stopped jumping, I could still find Sneakers cocking her head studying them. I was sure if I gave her one, there'd be a Spanish-speaking caterpillar whose remaining minutes would be numbered. (These moths never did emerge.)

Entomologists believe jumping bean caterpillars jerk to scare away birds and other animals that might eat the seeds, but if Blue Jays shared their range, Mexican jumping beans wouldn't last a week. Of course, the most valuable lesson I drew from this experience is that it's a lot easier buying a vacation souvenir for a Blue Jay than it is for children. 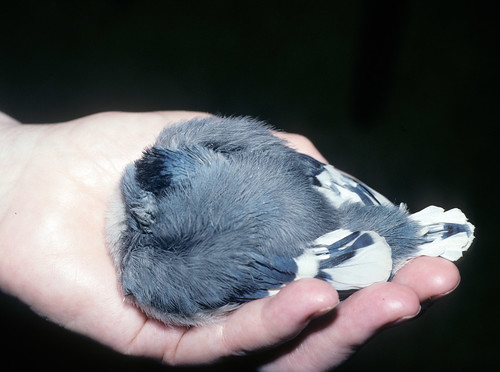