My backyard was a happenin’ place from mid-April through last week. With the cold weather, many birds moved elsewhere—probably closer to the lake or even backtracking a bit—and few new ones have flown in to replace them.

I had my first oriole on Friday, the ninth. He stuck around all day, coming to my oriole feeder for jelly, sugar water, and oranges, and to a hummingbird feeder, but next day he was gone. I’ve heard a distant Brown Thrasher a couple of mornings, too, and finally saw on on Wednesday the 13th, singing away in my neighbor’s yard. I had a lovely Rose-breasted Grosbeak on Tuesday the twelfth, but just for a while in the morning.

I’ve not had all very many sparrows this year, and didn’t start recording the dawn chorus until April 29, so I didn’t get any beautiful Fox Sparrow songs, but White-crowned Sparrows were singing up a storm for a few days last week, and a couple of Clay-colored Sparrows spiced things up too. South winds carried a bunch of birds close to the lake, but no one new showed up on Wednesday the 13th—it was the second day in May that I didn’t see a single new bird for the year.

Here in Duluth, migration hadn’t progressed far before the very cold weather set in, so I don’t think we lost many birds—they’re just late—but people further south and east did already have warblers and hummingbirds before they got heavy frosts and even snow. The saddest story I heard was in an email from New Hampshire saying:


I have a pair of Canadian Geese who hatched 5-6 goslings. Then the temps dropped to 28° for 2 nights, and it snowed 6". I have seen the parent geese, but NO goslings, since. They honk and swim past my pond frontage. Do you think the goslings survived?

Tragically, after baby geese hatch, they absolutely, 100 percent of the time, stay with their parents. So they must have died.

A scary email from Randi, in Excelsior, Minnesota, came on May 12:


I have been watching a nest of robins right outside my back door. They have been active in feeding their chicks. But today, just this evening I noticed a pile of feathers in the yard. They appear to be Robin feathers. And I have not seen any activity on the nest. My son checked and the chicks are still alive. Is there anything I can do?  Tonight will get too cold for them to survive. Is this just nature? Or is there something I can do?

She wrote a bit later:


I feel horrible about this. I keep watching and hoping I’m wrong.  But when I come out, I see neither male or female but the chicks are reaching up out of the nest for food when they hear me.

The wildlife rehabilitation center in Roseville was already closed for the day, so she was going to bring in the babies before dark to keep them warm and deliver them to the center in the morning, but then she wrote:


We brought the nest in - safe in a small cardboard box with holes.  Two of the four nestlings seemed ok.  Set part of it on a heating pad on the counter on low.  I turned out the lights and watched the spot that we took the nest from and after about 20 min., a bird returned.  We immediately returned the nest, But not before I noticed all four open mouths - and the bird returned again.  I’m leaving it there for the night.  Outside.


Thank you for responding.  It’s such a small little catastrophe when compared to the larger scope of things.  But for some reason, it really got to me.  I was rooting for her and we were getting used to each other.  Silly stupid bird!  Made me tear up!

When we consider all the problems facing the world today, this really was a small little catastrophe, but nevertheless, it was a catastrophe, and a big one to those robins. We lose a chunk of our own humanity when we can’t feel compassion and empathy for hungry baby birds or for an adult robin when it loses its mate and must raise the young on its own. So many of us are being overwhelmed with losses right now that a happy ending was exactly what I needed. So I found myself invested in this little family, too, and felt very happy in the morning when Randi wrote again:


I went out when it was finally light enough.  There is a robin on the nest.  I just watched it pulverize a big fat worm for the chicks and fly it back to the nest. 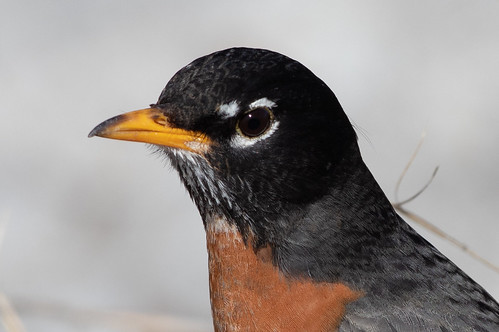