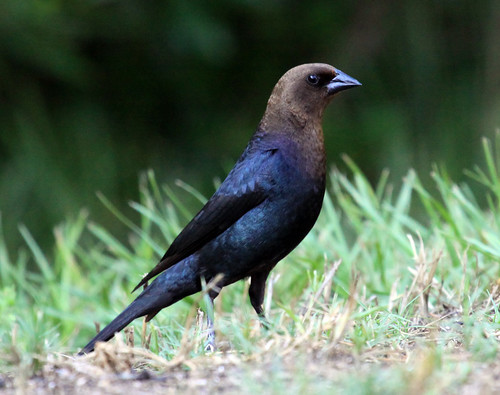 This week I got an email from Sarah Caldwell in Viroqua, WI, who listens to “For the Birds” on WDRT. She writes:


My back porch is by the kitchen where I sit for the better part of each day observing the birds visiting the feeder and bird bath & eating the sunflower seeds scattered on the porch.

Watching their movements is fascinating: how they hop or walk, how they eat the seeds, how they perch on the wrought iron chairs … to get a better look at my new bird bath, or to dry off.  I change the water every day. I love to watch the robins & cowbirds bathing.

I am writing to ask you to please speak about the cowbirds. I find their plumage beautiful, and how they congregate in flocks, the males swelling up to impress the females and their other behaviors are capturing my interest. I know they have some behaviors which are not very honorable; not sure what they are. I am hoping that you would be willing to share some words about these birds.

Brown-headed Cowbirds do deserve attention, so here you go, Sarah.

I saw my first on April 27, 1975. It was Number 16 on my lifelist, and the only lifer I ever added from Russ’s and my one-bedroom apartment in Lansing, Michigan. We had a bird feeder in what passed for a backyard—a treeless courtyard of lawn and dandelions encircled by six apartment buildings. We didn’t see a lot of birds in there, so I was surprised to wake up hearing something new and cool—a liquid gurgling sound. I jumped out of bed, looked out, and there they were—several Brown-headed Cowbirds, the males completely living up to the Brown-headed part of their name, and the nondescript females recognizable by the company they were keeping.

I was charmed by the males making that cool sound as they opened their wings and made a deep bow. A couple of times (never when I've had my camera) I’ve seen males do that bowing action from a thin telephone wire, leaning over so far they’ve lost their balance and toppled over. Normally they do it on the ground or a sturdy enough branch or wire that they don’t lose their footing.

The little group of backyard cowbirds that spring were fun for me to watch. I was very impressed with how some species seemed so monogamous and territorial while the cowbirds were decidedly neither. I watched one female mate with six different males in quick succession—monogamy seemed entirely out of the question, though studies show that cowbirds in many areas actually are monogamous. Wherever they are, they’re sociable, gathering in flocks to feed or simply to sit in trees or on wires together, seeming to derive security in numbers.

That spring I was taking an environmental education class, and told a few friends about every new bird I saw. And that’s how I discovered that, as charming as the cowbirds seemed to me, people knowledgeable about birds seemed to despise them. It turns out that cowbirds are what we call obligate nest parasites: rather than build their own nest, female cowbirds lay their eggs—an average of 41 per year—one each in the nests of other birds, leaving those other birds to rear the young.

Oddly, people who revel in the idea of predation, enthusiastically sharing photos of hawks feeding on bloodied warblers and vireos and saying, “Nature, red in tooth and claw,” disapprove of brood parasitism, though that is just as much a part of nature, and for millennia was the only way cowbirds could keep their species alive.

The day I saw my first cowbirds in April 1975, I had to use my field guide to identify them. I was a little concerned that my Golden Guide said, “The plain mouse-gray female lays its speckled egg in the nests of other species, especially of warblers, vireos, and sparrows.” But my Audubon Land Bird Guide, which included more natural history information than either the Golden or Peterson guides, gave it a positive spin:


Cowbirds are of South American origin. Of the 7 known species, 4 have parasitic breeding habits. But since the birds they most frequently impose upon continue to be about as abundant as their habitats permit, it is evident that the cowbird does not have an appreciable effect upon their population level.

Originally this species attended the great herds of bison on the prairies of the Midwest and was known as the “buffalo bird.” Now they attend cattle and are common about the man-made grasslands that cover much of the once-forested East. During the breeding season each pair usually has a fixed territory within which the female lays its eggs. The rest of the year they travel in flocks, often with other “blackbirds.”

That didn’t sound so bad, but every time I heard people talking about cowbirds, they disparaged them, saying the females were bad mothers. The way I saw it, those females had themselves been raised by foster parents and had no instinct or concept of nest building, incubating eggs, or brooding and feeding young. Historically, Brown-headed Cowbirds were birds of the prairies, feeding on seeds and insects in disturbed soil. Thick prairie sod made that difficult except where the bisons' heavy hooves cut up the sod. When bison moved on, the cowbirds had to follow or starve. It was impossible to predict when the bison would head on, but it didn't matter as far as baby cowbird survival went because the cowbirds left their young to be tended by species that had other, more steady and reliable ways of procuring their food.

But female cowbirds are exactly the kind of mothers their babies need. Cowbirds invest way more physical resources into egg production than most birds, laying an average of 41 eggs per nesting season, putting each one almost always in a different nest. Cowbirds invest a lot of time and energy sneaking around searching out nests of such birds as Chipping and Song Sparrows, Yellow Warblers, and American Redstarts. Human parents usually put less effort investigating the best daycare facilities for their children than cowbirds do.

Cowbird babies have their best chance of survival if they’re the only cowbird in the nest. That’s the best for the foster parents' other babies, too. When a mother cowbird lays her egg, she invariably tosses out one of the eggs already there, so there is an automatic survival rate drop of about 25 percent for the natural babies in that nest. But baby cowbirds are not particularly aggressive—they’re absolutely nothing like Eurasian cuckoos, which actively push out any eggs or chicks in a nest the moment they hatch.

There are several good reasons why cowbird chicks don’t need to be aggressive like that to thrive. First, their incubation period is only 10-12 days while that of most little songbirds is at least a day or two longer. This is exacerbated by the fact that cowbirds usually select smaller species, with smaller eggs. The large cowbird egg sits above the rest in the nest, so just by basic mechanics it gets the lion’s share of the mother’s body heat, speeding its development while slowing down development in the other eggs, giving the cowbird even more of a head start. In the case of the endangered and very tiny Black-capped Vireo, whose incubation can take 17 days, the cowbird may be a huge bruiser close to fledging before the vireo babies even hatch.

Parent birds don’t recognize their nestlings individually. When they come to the nest with food, the most assertive baby, with the widest open mouth, gets fed first. When all the babies are the same size and food is reasonably abundant, the hungriest at one feeding will be less hungry at the next feeding; over the course of hours and days, it all balances out.  But cowbirds are big, requiring more calories than smaller species. If they're begging at all, their large size just about always makes them look like the hungriest, so they get the vast majority of food per nest. One by one, the other nestlings may get too weak to beg at all. But when food is plentiful, at least one or two nestlings in most nests usually do survive.

In the case of Song Sparrows and other species that nest a second or even third time in a season, parents can produce a goodly number of babies in a summer even if one nest is parasitized. But cowbirds are a significant problem in the case of some endangered species, so the rosy picture portrayed by my Audubon Land Bird Guide was not entirely accurate. In particular, birds like the Black-capped Vireo of Oklahoma and Texas and Kirtland's Warbler of Michigan cannot sustain their numbers without extensive cowbird trapping. 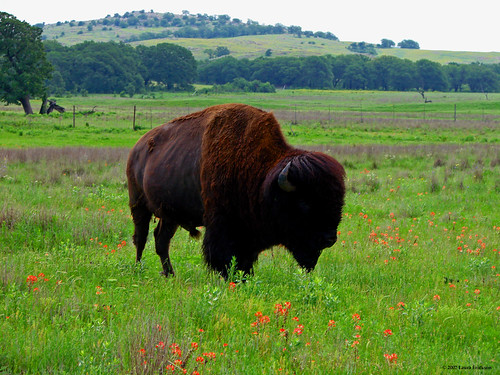 Ironically, the Wichita Mountains Wildlife Refuge, my favorite place of all to see Black-capped Vireos, is also home to a population of bison, so the cowbirds there seem to be leading a historically natural life. But historically, those bison didn't stay in the Oklahoma's heat in summer. They wandered north to cooler areas to have their own young, so there weren't bison or cowbirds present when the vireos were nesting. Today, fences keep bison from wandering outside the refuge where they could be a hazard on highways. Fences don't hold the cowbirds there—they just like hanging out where the bison are. Extensive cowbird trapping is the only way the vireos can survive now.

Fortunately, the cowbirds we see in most areas aren’t causing any critical population losses of our backyard birds. We can enjoy hearing and seeing the males’ displays without feeling guilty.

That said, it's kindest all around to avoid subsidizing cowbirds, which do fine without supplemental feeding. It really is best to limit ground feeding when and where they abound, especially while backyard sparrows and warblers are nesting—the same female cowbirds visiting feeders and coyly watching the males displaying are also keeping track of where every one of your backyard songbirds is nesting. The world would be less rich without cowbirds, but every individual cowbird does represent at least one tossed away egg of a sparrow, warbler, vireo, or other little bird, and as much as I like cowbirds, I love my Song Sparrows and Chippies. 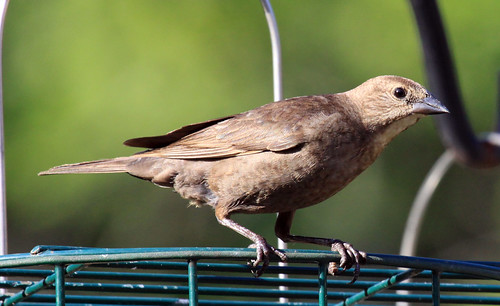