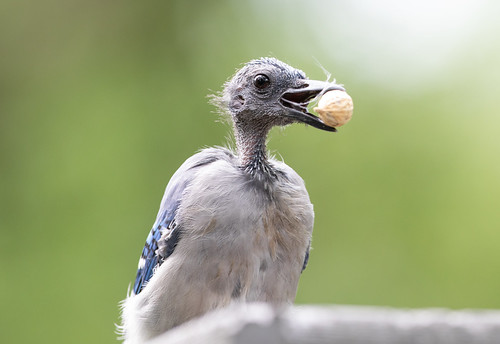 Every year in July and August, people here and there throughout the country notice bald Blue Jays and ask me about them. And every year I explain it pretty much the same way. Adult Blue Jays molt every summer. The feathers are replaced a few at a time over most of their bodies, so they retain enough feathers to keep flying and to protect their bodies from the elements. This is also how some of them molt their head feathers—for several years, I cared for a Blue Jay named BJ who molted this way. He might have a few scruffy days in mid-summer, but never lost too many head feathers at once. 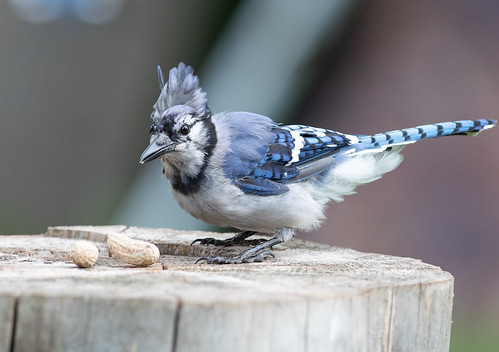 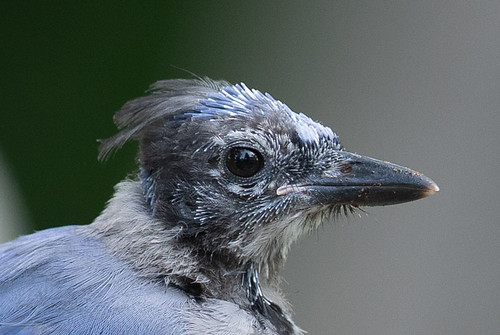 But some Blue Jays tend to drop all their head feathers simultaneously. This has one big advantage, reducing the number of days that the head is missing any feathers at all, but a big disadvantage, too, exposing the bird’s head to the elements with no protection whatsoever for as long as a week or two. I was licensed to keep an education Blue Jay named Sneakers for many years, and she molted this way. I was absolutely responsible for Sneakers, and very protective of her dignity, and this was also before I was taking many photos of birds, so I never took photos of her in her bald state. And oddly enough, considering how very much I’ve always paid attention to Blue Jays, I never actually saw a bald Blue Jay in the wild.

That is, until this summer. Being home during the pandemic, one of my joys has been whistling to my neighborhood crows and Blue Jays when I set out peanuts. The nearest crow family brought off four chicks, and the family of six has been showing up regularly at my big tray feeder. One of the parents noticed this spring that if I went into the yard and whistled when it was nearby, I always put some peanuts in the feeder, and now the whole bunch is likely to show up if they’re within earshot when I whistle. So far, neither parent has lost all its head feathers. 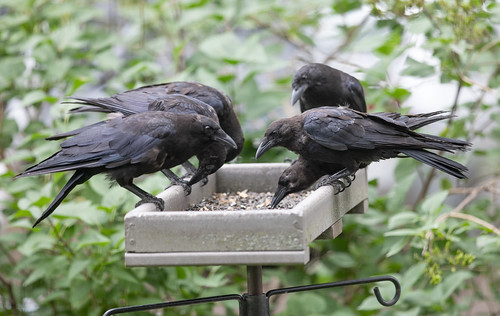 Two different Blue Jay families have been visiting my yard since their young fledged, too. The young of the first family were already pretty well grown, their tails almost as long as their parents, when they first started being conspicuous. When the adults started molting, I got glimpses of a bald parent occasionally, but I hardly ever saw that one feeding the fledglings—they were almost independent by then, and that bald parent did its best to stay out of sight. Then two weeks ago, I noticed that one parent of the second family, whose fledglings had relatively shorter tails than the first group, was bald, and that one was still regularly feeding chicks. 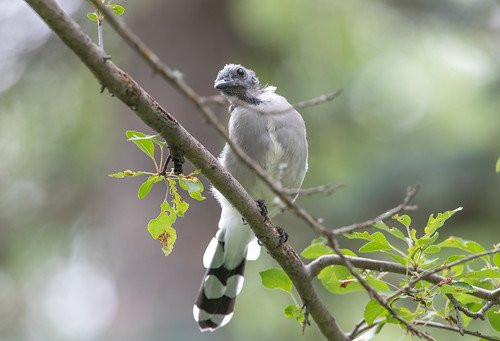 So suddenly I’ve got lots of photos of a bald Blue Jay. Neither of the two I saw are what you’d call shiny bald—the feathers didn’t just drop out but were pushed out by the emerging replacements. In my photos, you can see the short but growing new feathers still in their sheaths. It can be disconcerting seeing just how tiny a Blue Jay’s head is beneath those feathers—except for the bird’s beautiful body feather colors, there’s something very vulturine—that is, freakishly small-headed—about the bald ones. The photos are especially cool to see if you’ve never seen bird ears—with the feathers missing, the ear holes are exposed in detail. 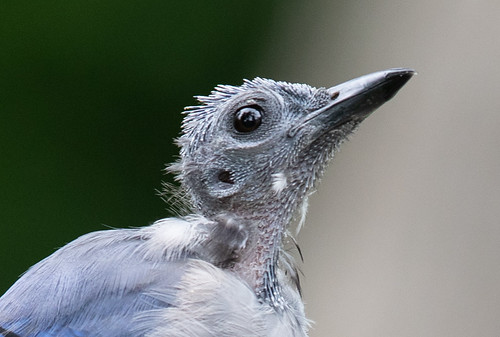 I don’t have the personal relationship with these wild Blue Jays that I had with Sneakers, but I still don’t like exposing my photo subjects to ridicule. Every photo I took was of a bird that approached me for peanuts, and I did tell it I’d be posting my pictures, but I’d still ask that those who view the photos on my blogpost do so with respectful interest. Gawking and derisive laughter may be the order of the day in the social media world, but Blue Jays, and people, too, for that matter, deserve better than that. 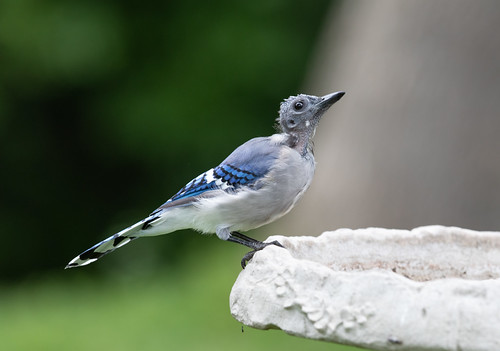