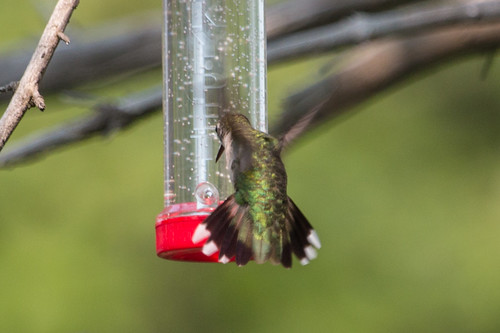 Right now, hummingbirds are everywhere. Adult males are among them, but they’re outnumbered by adult females and the young of the year—we’ll know the peak of their migration is over when we stop seeing adult males. They leave ahead of the adult females, their reproductive role finished. They spent the summer zipping around, chasing competing males and anything else they spotted away from their flowers, staying in top shape all season. The males who nested up here are almost certainly all gone now; it’s males who bred further north that we’re mostly seeing right now.

Adult females produced one, two, or even three clutches of two eggs, and then spent two weeks incubating each clutch, another three weeks feeding and brooding the nestlings, and days or weeks beyond that showing their fledglings how wild hummingbirds survive. They're pretty depleted when they’re done, and it takes weeks for them to get their bodies fattened up again for a long journey. But they light out before the young, especially the last-to-be-hatched ones, are ready. We’ll see stragglers well into September, and occasionally even into October. Those last babies are doomed after killing frosts wipe out their sources of nectar unless they find feeders with fresh sugar water occasionally. All the way down to the Gulf of Mexico, hummingbirds migrate by day, stopping all along the way for fast food.

Our gardens and hummingbird feeders are so alive right now that it’s hard to notice the other birds migrating already. Swallows that were gathering in increasingly large collections since July are on the move, too. One researcher calculated that a Barn Swallow simply catching food for itself and its young during the nesting season flew about 600 miles a day. So their bodies are in tip-top shape at all times. They, like hummingbirds, migrate by day when they can be catching food on the wing. Soon nighthawks will also be bugging out. We can watch them hawking insects over large fields in mid- and late afternoon, when they also start making more directed flight. On good nighthawk days, which are usually warm with low winds, we can see thousands migrating parallel to Lake Superior’s North Shore. As evening darkens into twilight, the nighthawks seem to rise higher and higher in the sky. Now with full stomachs, they can make more directed, serious flights toward South America.

An abundance of fruit is fattening many other migrants, who quietly swallow berry after berry. If we don’t carefully scan our dogwoods and chokecherries and so many other shrubs and trees, we’ll miss all the Cedar Waxwings, Eastern Kingbirds, Gray Catbirds, Baltimore Orioles, and Scarlet Tanagers pigging out on the fruit, with flycatchers, wrens, warblers, and vireos among them, taking fruits and insects. Once in a while, one will burst into song for a bit, but breeding and territoriality are over for the year, so we have to rely on our eyes more than our ears to detect most of them.

According to our calendars, summer will supposedly last for over a month still, but some shorebirds nesting in the Arctic were on the move just days after the solstice, and are now already gathering along shorelines and in shallow pools.

So much avian abundance fuels hawk migration, as well. I love knowing that the hawks that pass over are doing well, but feel something between irritation, dread, and anger when a Merlin dives into my own yard in pursuit of one of those little birds. Life in August is beautiful and soft and gentle and harsh. All those babies raised by all those birds all season don’t increase their species’ populations—they simply help them hold their own against all the difficulties each species experiences here, on its wintering grounds, and everywhere in between.

The nature of migration changes throughout the season, and the best way to enjoy it is one day at a time. Whether you’re stuck at home or working at an essential job during this pandemic, I hope you can enjoy some of the intense but ephemeral beauty of the season. Meanwhile, stay safe and well, dear listener.

I’ll be talking about the many different strategies different species use for migration on my September 1 Zoom presentation.