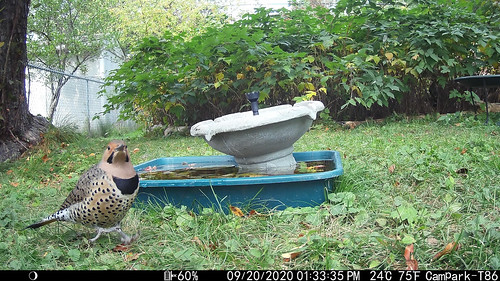 This year, I got three trail cams (my first two were Campark T80s and my third a Campark T86) that I set up by my two bird baths and in an area next to our raspberry bed where lots of White-throated Sparrows have been gathering and feeding. The cams don't have a zoom feature, so I have to set them up fairly close to where the birds will be, but they have a pretty darned good ability to focus from near to far. I move one of the bird bath cams to my 1’ x 3’ platform feeder at night. My original intent for that was in the hopes of seeing a flying squirrel, a critter we haven’t seen in our yard since the late 80s or early 90s. Instead, a little deer mouse or jumping mouse comes into that feeder every night. Because I'm not certain of the species, I'm calling it my "dear mouse." 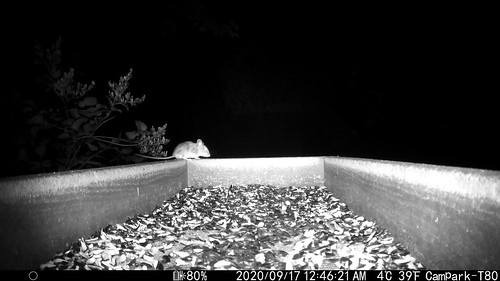 He or she disappeared for two nights after one of my other cams caught a neighborhood cat roaming the yard. Cats simply do not belong loose outside. In Duluth, it’s not only a horrible practice with regard to wildlife, the health of the cat itself, and the danger that cats allowed outdoors can transmit toxoplasmosis to children and the elderly via sandboxes and garden beds that cats use as little boxes—it’s also illegal. Fortunately, after a couple night’s scare, my little mouse was back in my feeder. If I do manage to catch that cat, I will be bringing it to the pound.

By day, I’ve gotten fun videos and photos of a good assortment of birds, from flickers to thrushes and warblers. By night, it’s alerted me to mammals besides that prowling cat, including a few deer mice, a skunk... 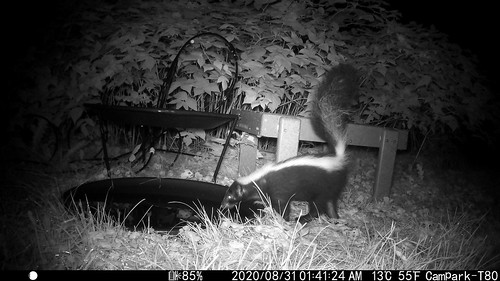 and wonder of wonders, a flying squirrel, not at my feeder but at a ground-level birdbath.

This year’s Blue Jay migration has been extraordinary. As of September 22, 48,056 Blue Jays had been tallied—a full 30 percent of all the birds counted at the Hawk Ridge main overlook this year! I get Grandma duty every morning. The Blue Jays are big and flashy enough, when there are so many, that 5-week-old Walter has already been noticing them, but on September 20, the little guy fell asleep in his bassinet for a while when my platform feeder was crowded with Blue Jays, so I grabbed a few photos out the window. And my photos show 19 in my platform feeder at one time, or 6.3 Blue Jays per square foot! 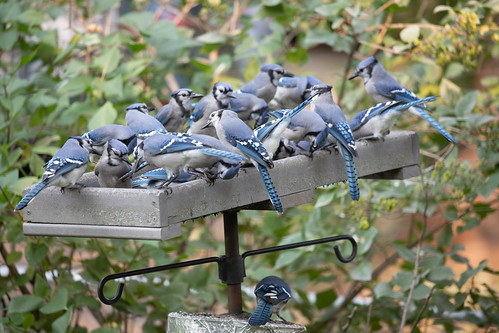 We’ve had an ongoing rat problem in the neighborhood for the past few years, but the rats seemed to have disappeared this summer, and my cams hadn’t shown evidence of a single one, at least not until the night of September 20-21. 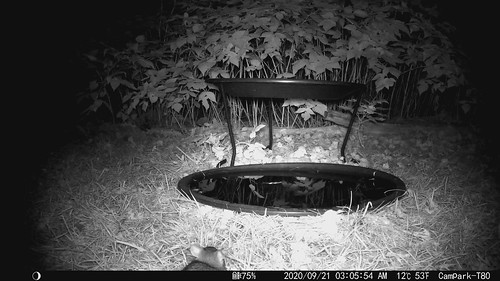 So now, at the peak of sparrow migration, before a single Harris’s or adult White-crowned Sparrow has shown up in my yard, I’m going to have to completely end my ground-feeding, empty at least one bird bath every night, and be extremely careful about spillage from my other feeders for the year.

I don’t know if I’m more upset about the rat or the cat. I sorely wish that the cat would dispatch the rat whose body would somehow poison the cat, but that’s not how nature works. Domestic cats are singularly poor at preying on rats despite the ridiculous claims those feral cat groups make with regard to trap-neuter-release programs. Outdoor cats mostly kill birds and tinier rodents, and in the Duluth area, that means chipmunks and the native mice that provide a prey base for our owls and hawks, and a great deal of entertainment for me, trying to figure out how my one little mouse makes it past my squirrel baffle to get into that feeder.

So my backyard surveillance program has uncovered two real problems. But I feel much much better just looking at the video of my flying squirrel. He or she was only there a single night, so I know my bird bath isn’t essential to the little guy’s existence, but I’m sure glad it came down to earth to give me a happy thrill for one night. 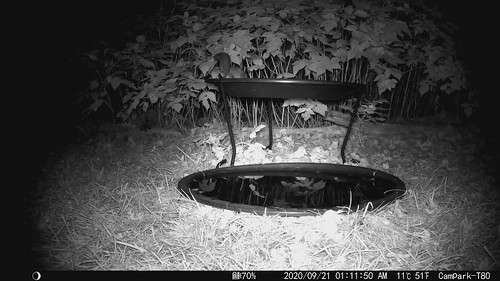