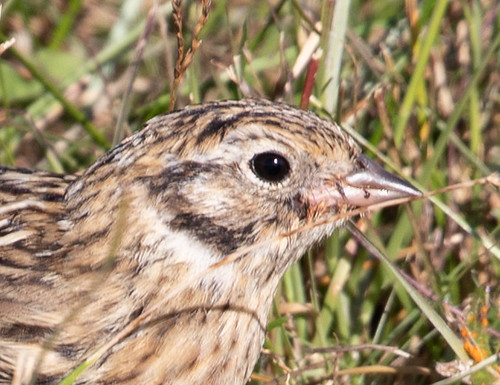 One of my favorite birds that I’ve hardly ever seen in my life is Smith’s Longspur. You can count on the fingers of one hand, without using the thumb or index finger, the number of times I’ve seen this tundra-nesting species. (You'd need a lot more fingers to count the number I tried for but missed!) I got my lifer with my friend Paula in Arkansas in January 2006, at the Stuttgart Municipal Airport, which is the birding hotspot for birders to add this species quickly and easily every winter. As many as 150 have been seen in the tiny airport—most birders see fewer than 10 simply because they go there, see it, and move on. When Paula and I went five years after 9-11, airport security regulations throughout the country were at their strictest. We entered the office, they saw our binoculars, sent us to a sign-in sheet, and told us to get off the runway if we heard a plane coming. I was thrilled to finally add this lifer—they’d been seen in Duluth a few times in the previous 25 years, and in western Minnesota most years, but I’d never been able to break away to see them except for the times I just missed one. My 2006 photos were exceptionally crappy, but oh, well—they were the best I had, and they showed my lifer. 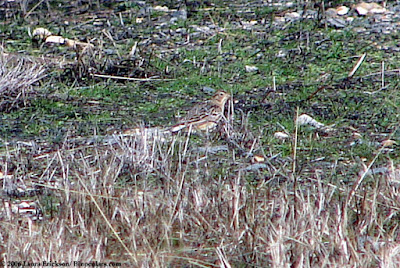 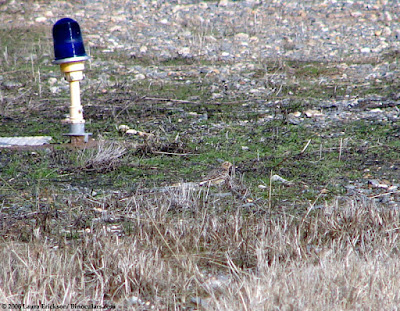 Smith’s Longspurs are regular in a few grassland areas in western Minnesota in mid-October, and may appear, rarely, in Duluth and along the North Shore in spring and fall, but they usually take a lot of effort to see. When I wrote my Field Guide to the Birds of Minnesota for the American Birding Association, I was limited to 300 species, but made sure to include it not just because it is regular but fairly predictable and "gettable." The Minnesota Ornithologists’ Union often has mid-October field trips to see it. Back on October 6, 2017, I saw one briefly, but didn’t get photos at the Old Stella Jones Pier in Duluth.

Then this year, on September 17, I heard there were a couple at the McQuade Road safe harbor, just a few miles up the shore, so Russ and I went there in late afternoon. And voila! I finally got some reasonable pictures of this elusive but fascinating bird. 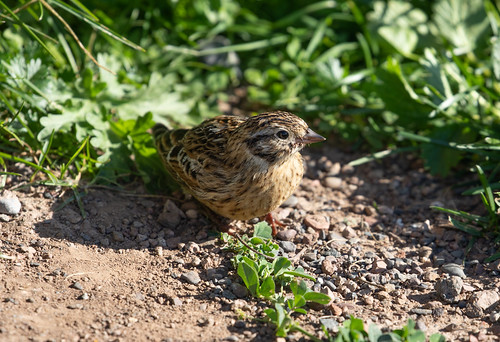 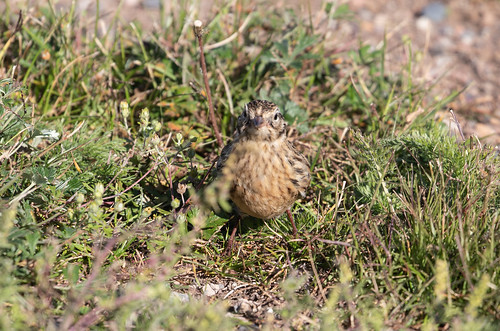 In autumn, Smith's Longspur is fairly nondescript, but it is, indeed, fascinating because this species has one of the most unusual social breeding systems known among birds. Most songbirds form socially monogamous relationships for breeding, even as the majority of species have what we call extra-pair paternity—that is, even in birds that form fairly tight pair ponds, such as chickadees and bluebirds, a lot of hanky panky goes on. But Smith’s Longspur is polygynandrous. Rather than forming pairs at all, each female associates and copulates with two or three males to produce a single clutch of eggs. And each male associates and copulates with two or more females.

Males do not defend territories, but instead guard two or three females by following them closely and competing with each female’s other mates for fertilizations. Over a period of one week in the early spring, a female longspur will copulate over 350 times on average; this is one of the highest copulation rates of any bird. The males are each trying to ensure that their sperm will displace the sperm of each of their mates’ other mates. To accomplish this, the testes of Smith’s Longspurs are about double the mass of those of the closely-related but monogamous Lapland Longspur. Once chicks hatch, two or more males may assist each female in caring for her nestlings; the amount of care provided by each male depends on the number of young he has sired within that nest. No one understands how this system, so different from other longspurs, arose in the first place. Perhaps the advantages females obtain from extra male help in raising offspring may explain why they pair and mate with more than one male, but since each male divides his time among two or more females, too, a true explanation isn’t quite that simple.

Two exceptionally calm, cooperative Smith’s Longspurs were at the McQuade landing Thursday and Friday, hanging out with several Lapland Longspurs. A Merlin looking for lunch flew over and one of them ran to a rock on which a birder was sitting. It crouched down between the rock and the man's boot. I didn't react in time to get a photo of that.

Smith's Longspurs are sparrow-sized and colored, blending in with the grass and weeds, but I got a lot of photos. I’d of course love to get pictures of them in their striking breeding plumage, but their soft winter appearance is quite lovely in its own way. 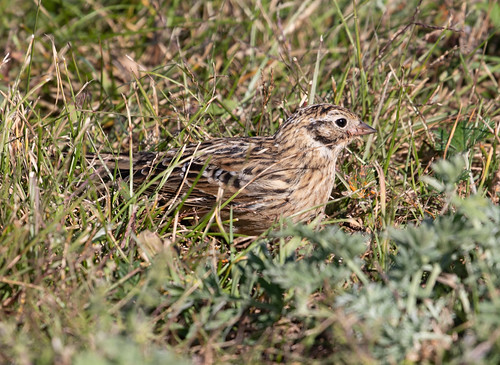 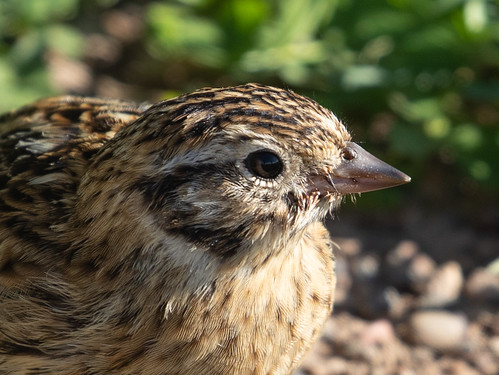 When Russ and I got there, even as we could see the three birders who arrived before we did taking photos, we got distracted by an unusually cooperative American Golden-Plover and Pectoral Sandpiper. 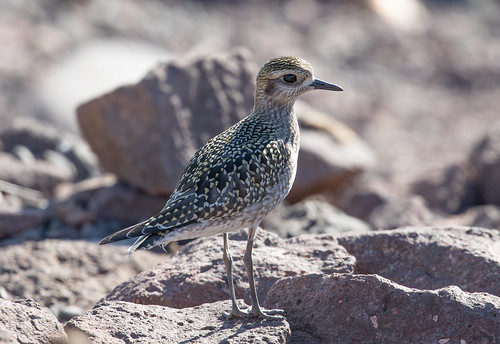 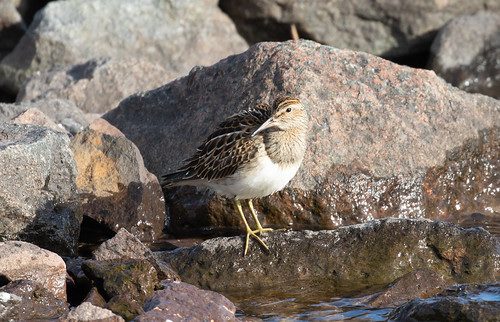 I didn’t spend too much time with them before I headed for the longspurs. We spent over a half hour standing in one spot looking at and photographing longspurs before we started back, getting distracted all over again by the plover and sandpiper. So I have plenty of pictures of them, too. Like the other birders, the plover and sandpiper stayed socially distanced from us, so all was well on a jolly afternoon. 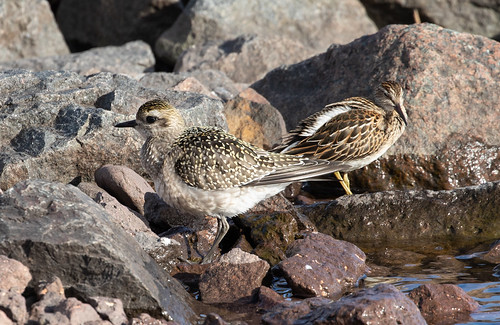 A Brief Digression into Nomenclature

In recent weeks, ornithology has been rocked by the American Ornithological Society changing the name of the longspur previously called McCown’s to the Thick-billed Longspur. McCown may have shot the first described specimen(s) of that longspur in Texas, but he had no clue what they were—he was simply shooting at Horned Larks when he found one or two oddballs among the carcasses and sent them to his friend George Lawrence, who named them for him. At the time, McCown was serving in the U.S. Army in Texas. He wasn’t much of a naturalist, but all the birds he shot for science and the one article he wrote about roadrunners were a direct result of serving in the U.S. Army after he was educated at West Point. He turned against that army to join the Confederates during the Civil War, making him a traitor to his country in a war fought to support slavery. Honoring him for shooting some birds he didn’t even know needed to be corrected.

An excellent case could be made that the name of Smith’s Longspur should be changed, too, but not for the same reasons. Smith’s Longspur was first described by William Swainson as the “Painted Buntling” in 1831 from a specimen in breeding plumage collected by John Richardson in Saskatchewan. More than a decade later, in 1843, John James Audubon received specimens of the same species in winter plumage from Illinois from Edward Harris and John G. Bell. He named what he incorrectly thought was a new species in honor of his friend Gideon B. Smith of Baltimore in 1844. When ornithologists realized the two were the same species, they decided to solve the discrepancy, by keeping Swainson’s scientific name (Emberiza picta) while retaining Audubon’s vernacular name honoring Smith. This really does violate those "written-in-stone" rules about primacy that some ornithologists cited to argue against changing the name of what is now the Thick-billed Longspur.