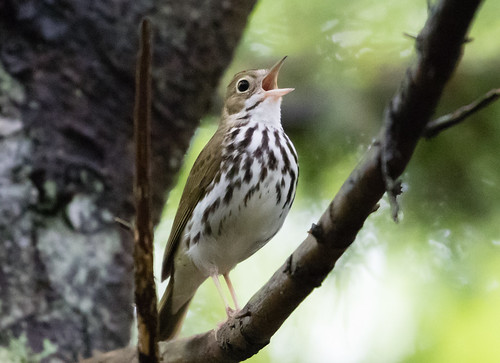 When I was a little girl, my family went to Chicago forest preserves a lot for picnics with aunts and uncles and cousins, and I’d often break away from the hubbub to take a walk by myself in the woods. There was plenty of bird song in spring and early summer, which I loved to listen to, but I didn’t know how to listen—how to pick out the individual voices to appreciate how each component contributes to the symphony—any more than I knew how to listen to orchestral or even 50s band music and pick out individual instruments.

Back then, the only birds I recognized by song were the cardinal and House Sparrow, and if I didn’t see them or hear them in a spot where I knew cardinals or sparrows would be, I couldn’t be certain that it wasn’t some other bird singing that exact same song. College enlightened me on both scores—music appreciation classes taught me to differentiate musical instruments and to pick out different musical themes that could be going on simultaneously. And ornithology, in combination with my constant birding, taught me how to listen for each avian instrument and the nuances that would help me differentiate individuals and work out the context for different vocalizations.

In the same way that seeing instruments and watching them played by orchestra members helped me learn them, watching birds singing made it easier for me to learn their songs. We heard one bird singing teacher, teacher, TEACHER! during my first week of field ornithology, but it wasn’t until the second week, when we finally saw the Ovenbird singing away, that the song solidified in my brain. It’s a song I must have heard over and over as a child in those Chicago forest preserves, but hearing it in class, I didn’t recognize it at all. It’s conspicuous enough that Robert Frost’s poem, “The Oven Bird,” is entirely about the song. The poem begins:

There is a singer everyone has heard, /Loud, a mid-summer and a mid-wood bird, /Who makes the solid tree trunks sound again.

It may have been a little presumptuous of Robert Frost to say “everyone” has heard this singer, but anyone who has ever walked in the woods in New England, the Appalachians, the Midwest, mid-Atlantic states, or forests of central and eastern Canada from May through July has definitely been in earshot, whether or not they were listening. And many people notice that loud, ringing song without knowing who’s singing it. 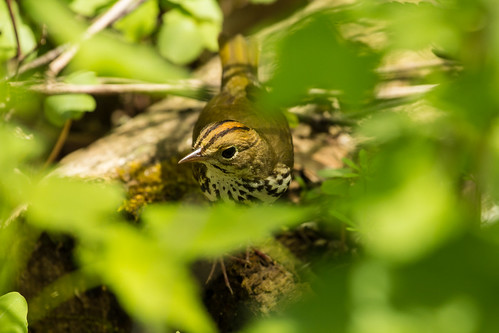 I’ve lost a lot of my high-frequency hearing, but have no trouble hearing Ovenbirds, who sing at a nice, low frequency. The “teacher teacher” mnemonic works because the song sounds like a repeated word of two syllables, but each of those words is actually composed of 3 to 5 separate notes which our mere human ears can’t resolve. Ovenbirds hear every nuance and can recognize one another’s unique, individual songs. After working out territorial boundaries, Ovenbirds are fine with their neighbors singing in their proper territories, but they chase off Ovenbirds singing a different tune as one who doesn’t belong there. And neighbors often sing together, one starting up and a neighbor or two joining in a split second later. This may contribute to the ventriloquial quality of the Ovenbird song, which makes it harder for a predator to locate them by sound. 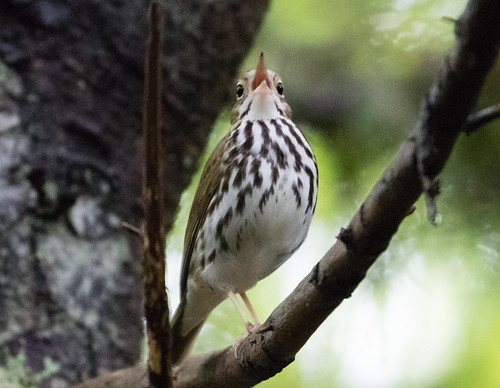 In addition to the song, ornithologists have described 13 different calls produced by Ovenbirds during the breeding season, 7 by males and 6 by females. Their research suggests that at least 11 of these vocalizations involve communication between the sexes. This array of calls may take the place of some visual signals given by more boldly colored or sexually dimorphic species.

The Ovenbird is a lot more than just its wonderful song, but that’s a topic for another blogpost. 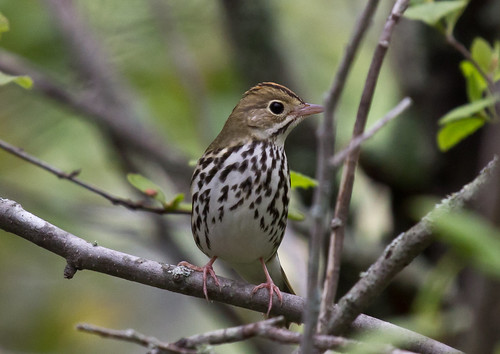