The New York Times this week reported on a new study, from the Memory and Aging Center at the University of California San Francisco and other institutions, about the value of taking what the researchers call an “awe walk” for physical and mental health. The study subjects, all people in their 60s, 70s, and 80s, were physically healthy, and baseline studies of their mental health showed they were psychologically well-adjusted with little anxiety or depression.

These subjects were divided into two groups. Both were asked to start taking a weekly 15-minute walk outdoors, in parks or urban settings, and to take a few selfies to document the locales, but otherwise to avoid using their phones during the walks. Half weren’t given any other guidance. The other half were told to try to walk somewhere new, paying attention to details along their walks, and to look at everything with fresh, childlike eyes.  The walkers in both groups uploaded their selfies to a lab website and completed a daily online assessment of their current mood and, if they had walked that day, how they had felt during their strolls.

After eight weeks, the scientists compared the groups’ responses and photos. The group they called “awe walkers” seemed to have developed skills at discovering and amplifying the pleasure and, yes, awe, in what they saw. One volunteer reported focusing on “the beautiful fall colors and the absence of them among the evergreen forest.” A control walker, in contrast, said she spent much of a recent walk fretting about an upcoming vacation and “all the things I had to do before we leave.” Overall, the awe walkers felt happier, less upset and more socially connected. People in the control group reported some improvements in mood, but their gains were slighter.

One odd difference was in the groups’ selfies. Over the course of the eight weeks, the scenery took up an increasingly large proportion of each photo taken by the “awe walkers.” In other words, their “self” grew smaller and the world larger. Nothing similar occurred in the photos from the control group.

I’ve got a long history as an “awe walker.” I walked 4 blocks to my elementary school, a mile and a half to my high school, and everywhere on campus when I was at the University of Illinois and Michigan State University, and relished that time alone, walking outdoors. Decades before there were selfies, I spent my walking time focused outside myself, filled with awe at the shapes of cumulus clouds, the changing fall colors, sparkles on fresh snow, the different shades of green in early spring, the rich green and beautiful scents after a summer rain.

At Michigan State University, I took my first course in environmental education from the inspiring Bob Hinkle. Suddenly I was required to learn the names of trees and plants, found out that the generic squirrels in my own Chicago backyard were actually two different species, eastern gray and eastern fox squirrels... 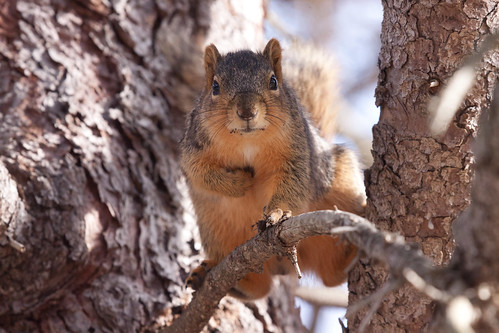 ...and discovered that the ducks swimming on the Red Cedar River on campus were not two different species, one with shiny iridescent green heads and the other mottled brown. No—they were all Mallards, the bright ones males. 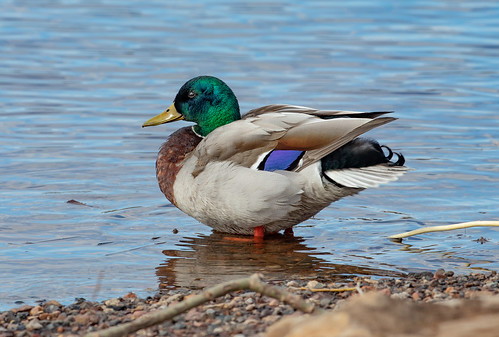 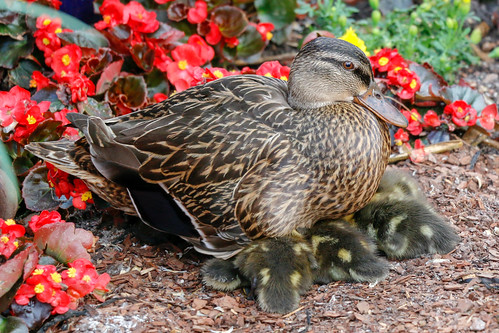 Memorizing all this for tests could have been daunting and stressful, but instead, it filled me with awe as I paid attention to the same campus ducks I’d been seeing for a couple of years with fresh eyes. This was right when I started birding.

My life seems divided into two parts: Before Birding and After Birding. Seeing a Black-capped Chickadee on March 2, 1975 seems the precise moment when everything changed. After that, I could walk on the Michigan State campus or in my hometown, in the exact same places that I’d walked a hundred or even a thousand times before, and it was all entirely new. Sure, I’d always been noticing lovely things, but suddenly there were so many more lovely things: Chimney Swifts flying overhead, juncos darting up from the gravel along the edge of the street where I grew up, White-throated Sparrows singing their amazing Old Sam Peabody, Peabody, Peabody from the shrubbery, and those wonderful little chickadees all over the place. How had I never noticed any of this before?

I went out birding a lot that first spring, ending the season with 40 species on my lifelist. Now I’ve seen over 2100. That’s a very short lifelist by serious world birder standards, but it’s something I’d never have been able to conceive of in 1975. I am often jolted with the realization of how very lucky and blessed and rich I am to have experienced so many birds.

Of course, every time you add a lifer, that’s one more bird you’ve already seen, by definition making it no longer “new” the next time you see it. Except that newness really is in the eyes of the beholder. I’d actually seen a Blue Jay long before I added that species to my lifelist on March 23, 1975. When I was about seven, so around 1957, my family spent a week in Lake Geneva, Wisconsin. One morning I heard squawking in a tree, looked up, and there it was—a gorgeous, unmistakable Blue Jay, which I recognized from my Little Golden Activity Book: Bird Stamps. Like the cardinals I already knew so well from my own neighborhood, the Blue Jay was on the cover of that book, and the memory of the one I saw in real life was instantly and firmly impressed in my brain. 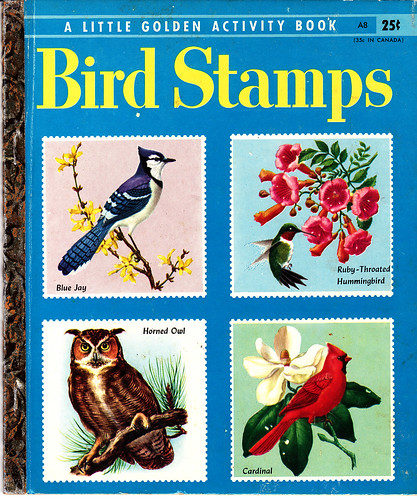 My lifer was equally thrilling, calling to mind that first Blue Jay, and this one was just as close but now seen through binoculars, making it even more gorgeous. Now, 45 years later, I’m very often struck anew by their beauty, intelligence, and spunkiness—I wonder if I’ve ever looked at a Blue Jay without smiling. 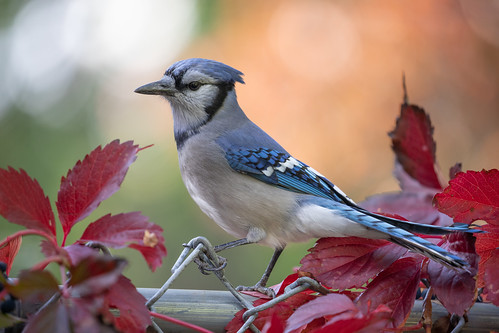 This month, October 2020, started with a full moon, and there will be another full moon on Halloween. When there are two full moons within the same calendar month, the second is called a “blue moon,” and once every blue moon I declare that month National Blue Jay Awareness Month. And most appropriately, this month is at the tail end of an extraordinary Blue Jay migration season here in Duluth. Over 50,000 have been counted flying past Hawk Ridge, just above my neighborhood, since September 1. From my yard I’ve photographed as many as 19 in my tray feeder at one time. 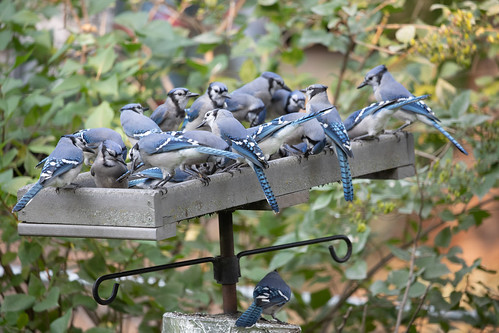 Because I’ve been stuck at home since March, this happens to be the year I’ve taken more photographs of Blue Jays than ever before, and caught some cool behaviors and plumages I’d never before captured in photos. I won’t be devoting every October program to Blue Jays—I’ve talked about them plenty already this year—but will be sharing some genuinely awesome things about them now and then this month.

Recapturing awe in our daily lives can be difficult during a pandemic. But paying closer attention to even the most everyday birds as Blue Jays can help us get through hard times. As the study about “awe walks” confirms, noticing the beautiful within our everyday lives takes us out of ourselves for a moment and lightens our spirits, something we all need right about now. Stay safe and well, dear reader. 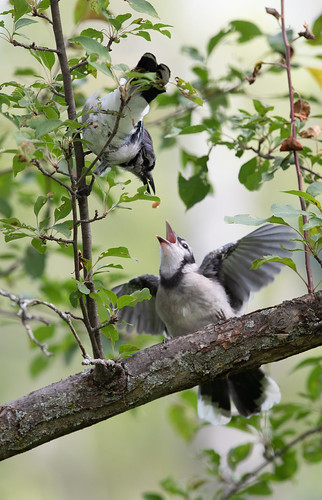