The Dinosaur Connection, or Why Ask Why? 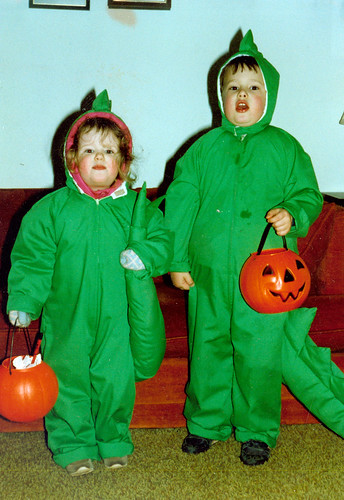 I’ve been thinking a lot about dinosaurs in the past few weeks. Partly this is because my baby grandson Walter has several onesies decorated with dinosaurs. One adorable newborn-sized onesie even has a camouflage dinosaur design. 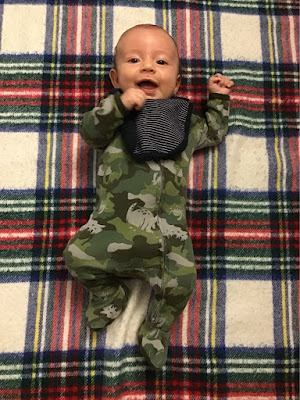 I don’t know if the designer wanted to suggest that babies need camo to hide out from dinosaurs or with them, but it was fun speculating. Walter outgrew that a couple of months ago, but at every size range he’s had at least one or two dinosaur outfits. I suspect that like my own children, Walter is going to be learning dinosaur names even as he’s first starting to recognize squirrels, Blue Jays, and other wild-alive creatures in our backyard. 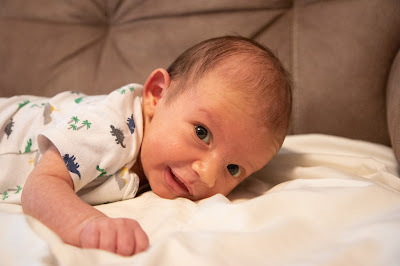 What struck me in the past two weeks has been realizing how easily we humans make comparisons of living creatures to pterosaurs and dinosaurs, as if we'd actually seen those extinct animals in real life. The American Birding Association named the Pileated Woodpecker their Bird of the Year, and the January issue of Birding is chockful of articles about Pileateds. In Peter Pyle’s piece discussing Pileated Woodpecker plumages, he didn’t make any fanciful dinosaur comparisons, just an interesting scientific observation regarding the sequence of wing-feather molting in Pileateds and other woodpeckers:

These sequences are widespread and consistent, indicating that they are ancestral in birds. Indeed, it has recently been shown that the paravian dinosaur Microraptor, a precursor to birds, replaced its feather-like scales in a similar sequence.

ABA President Jeff Gordon titles his introduction to the subject “A Punk Rock Pterodactyl in the Suburbs.” It was hardly a new comparison—way back in 1988, I wrote about Pileateds, “there is something so magical in their wild calls and pterodactyl-like bearing,” and I was far from the first to liken them to creatures that have been extinct for 65 million years. 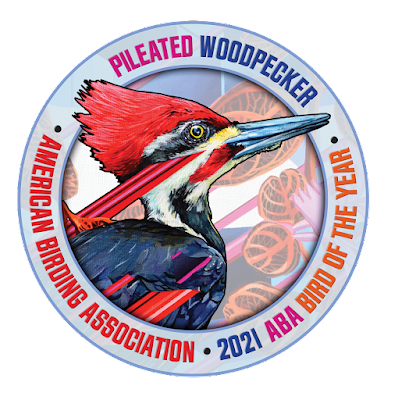 I was already thinking about this weird pterodactyl description for a currently living bird when I read Asher Elbein’s article about Great-tailed Grackles in Audubon. He wrote that they were “longer and lankier than your average songbird, with a swift-stepping, dinosaurian stride and distinctly penetrating stare.”

Again, I am all astonishment. People have been seeing real-life, day-to-day birds of all kinds throughout human history, and no human being ever has seen a living dinosaur. All we know about them comes from fossils, mostly bone fragments! So why is it that when we want a vivid description of Pileated Woodpeckers in flight or grackles strutting about, we expect our readers to universally know exactly how pterosaurs and dinosaurs looked and moved? 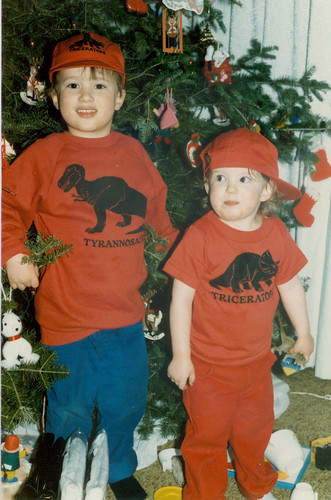 It seems incredible that we so readily believe we can visualize something no one has ever seen. I can't blame the blockbuster movie Jurassic Park for my own fancy—it didn’t come out until 5 years after I'd compared Pileated Woodpeckers with pterodactyls. I didn't go through a dinosaur stage as my own children did, but in reading dinosaur books to them starting in the early 80s, I got as fascinated as they did. We may find dinosaurs more universally familiar than the birds we spend our day-to-day lives with because so many children grew up with the idea of dinosaurs planted firmly in their brains by books, museum exhibits, and movies.

When my youngest son was a preschooler, I’d take him along when I was invited to present a program during the school day at a garden club or senior center. Tommy was very shy but resourceful: while I spoke, he’d sit quietly at a table somewhere near me with crayons and paper, entertaining himself during the entire talk. One afternoon after my talk at a senior residence, as he continued coloring away, I took a few questions. One man asked if any birds have teeth. I explained about the egg tooth—a small, raspy projection near the tip of the bill that birds still in the egg have to help them work their way out. It’s still visible on newly hatched birds for a day or two until it's resorbed by the tissue of the growing beak. Other than that, though, no birds have teeth.

The moment I said that, the microphone was yanked out of my hands. My tiny son, standing beneath me, held it up to his own mouth and said, “Archaeopteryx had toofies.” I took the mic from him and explained that Archaeopteryx was a prehistoric bird, considered a transitional creature between dinosaurs and birds. And again, the microphone was yanked from my hands and Tommy announced, “Tyrannosaurus rex had BIG toofies!” 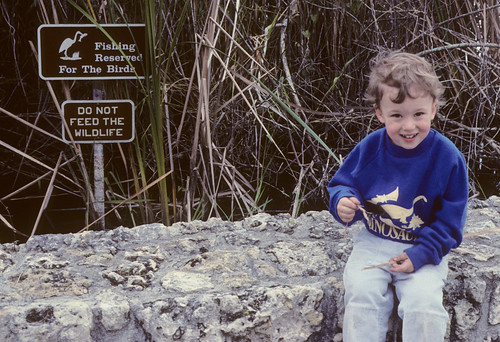 At a point when we were still using baby words for many everyday things, such as toofies for teeth, Tommy had fully mastered the complicated scientific names for a lot of dinosaurs.

My children were also very interested in birds—my daughter’s second word was "boojay" and all three liked seeing the various birds at our window feeders and the birds I rehabbed. 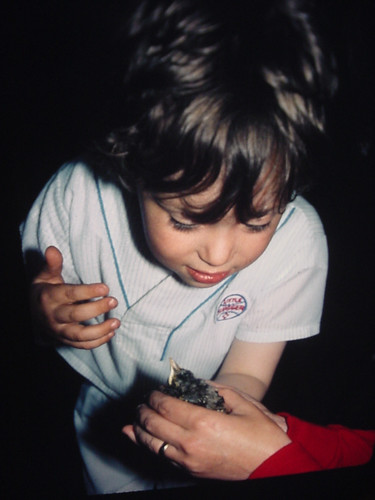 But birds didn’t consume their imaginations in the same way that dinosaurs did.

Birds evolved so directly from dinosaurs that logically, birds really are living theropod dinosaurs, but small children, writers describing Pileated Woodpeckers and Great-tailed Grackles, and baby-clothes designers apparently find the extinct species of their imaginations more vivid than the feather-clad, here-and-now survivors. It's a mystery, but why ask why?