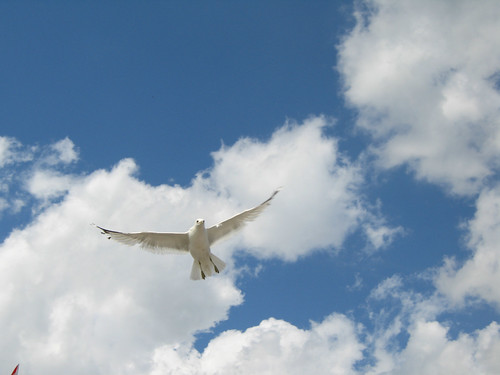 Ever since I learned about birds in college, I’ve been envious of their superior bodies. As a preschooler, I of course longed to fly as high as the clouds, where heaven and my beloved grandmother were in my imagination. But as my understanding of how bird bodies work grew, I appreciated them for far, far more than just flight.

Bird vision is much keener than ours, with some species having an order of magnitude more rods and cones in the retina. Many have the ability to see in ultraviolet wavelengths, something we can only imagine by photoshopping in a shiny pinkish-purple glow—even our imaginations are boxed in by the limitations of our human eyes. The keen hearing of many species extends to higher frequencies than we mere humans can discern.  We know that birds somehow sense barometric pressure and the earth’s magnetism, though we have no human way of imagining how that must feel. All this I’ve appreciated for several decades. But as I get older, I appreciate more and more about bird bodies. 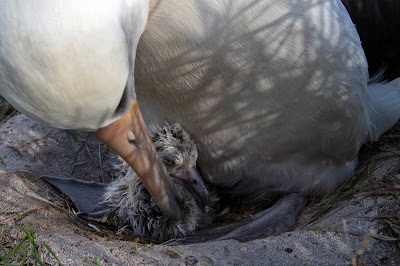 One Laysan Albatross on Midway Island, named Wisdom, is at least 10 months, and possibly several years, older than me. Her minimum age is 70, yet this year she’s again successfully negotiated courtship and produced a viable egg and is now raising a chick. I’m assisting in the raising of a human baby this year, but can definitely feel how much easier it was to pick up a 20-pound 7-month-old back when I was in my thirties than now when I’m almost 70. Long ago, birds sensibly worked out how to raise chicks without having to lug them around. Wisdom’s eyes haven’t been subjected to cataract surgery nor does she appear to need bifocals, and she clearly is not wearing hearing aids. I’m envious. 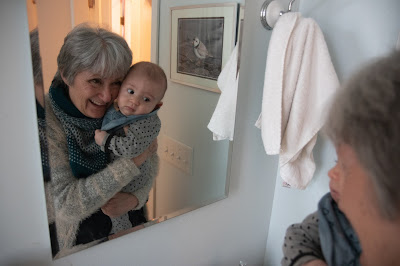 But last week it hit me hard just how superior birds are when, in the same week, Walter was feeling pain and discomfort from a new tooth starting to grow in, and I was feeling even more pain and discomfort from a very old tooth reaching the end of its life, causing an abscess.  I suddenly started thinking about how birds are way too advanced to deal with teeth at any stage of their lives.

All birds have a gene that deactivates the formation of teeth. In 2006, researchers at the University of Manchester and the University of Wisconsin proved that, manipulating a chicken’s genes to make it grow teeth. But when did birds stop having teeth? In 2014, researchers published a paper in Science tracing the gene that deactivates tooth formation back to a common ancestor of all modern birds, which lived some 100 million years ago.  They found that the development of the bird’s beak and the loss of the bird’s teeth appear to have happened at around the same time, but there were a few transitional species, such as Ichthyornis, which had a partial beak in the front of the mouth while it still had teeth in the back. 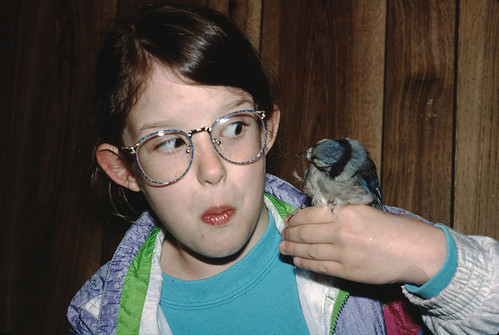 When I was a rehabber and occasionally raised baby Blue Jays, I discovered that they were fascinated with my teeth. If I’d open my lips, they’d invariable peck gently at the front teeth and cock their heads trying to figure them out. I suspect they thought my teeth were delicious seeds I was hiding, just as they hide food items in their gular pouch. It was adorable watching them puzzle this out.

It’s long been believed that birds lost their teeth to enable flight, but some flighted birds, such as Archeopteryx, had teeth, and our only flying mammals, bats, still have them. Some scientists speculate that beaks may be better than teeth for dealing with some kinds of plant food, but many birds don’t eat plants, so that doesn’t explain it, either.

Me—after a lifetime of dental experiences, from grossing out my second grade teacher by pulling out my loose front tooth during reading class, painful drilling leading to fillings laden with mercury amalgam, oral surgery to remove impacted wisdom teeth, painful and grossly expensive orthodontia, and now an abscess leading to an extraction and a bridge—I look at photos of Wisdom the albatross and see my happy little backyard chickadees, nary a dental concern ever even momentarily clouding their minds, and realize that in the case of birds, evolution definitely worked out a better way. 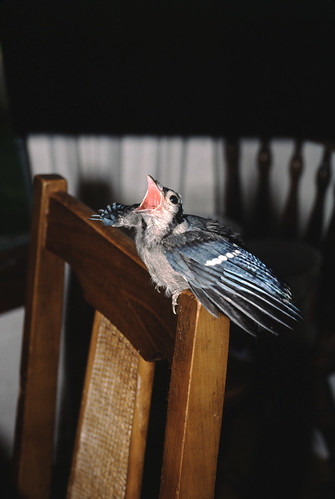