Saturday morning when I was looking out my home office window, I saw movement in Russ’s old, quite-dead cherry tree, so I grabbed my binoculars. A chickadee was excavating a hole, and the moment it flew away carrying wood chips, another chickadee flew in. The two of them worked at it while I watched and took photos and videos, both from my window and then much closer in the yard. These two chickadees know me—they come to my whistle when I put mealworms in my feeder—and they kept working away, taking turns, while I watched. 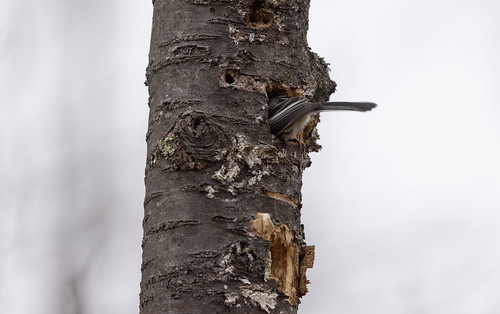 That dead tree is pretty much riddled with holes, but I’ve not noticed any birds ever actually nesting in it. Unfortunately for my chickadees, just three or four inches below the hole they were working on was another hole bored into the center of the tree. Suddenly I realized that when they hollowed out their cavity down to that level, which they of course would because they construct their nest several inches beneath the entrance hole, they’d come to that big opening and move on to nest elsewhere.

Russ and I decided to cover up the lower hole in hopes that when they dug through to that level, they’d keep going. So he got a chunk of bark and duct-taped it to the tree. 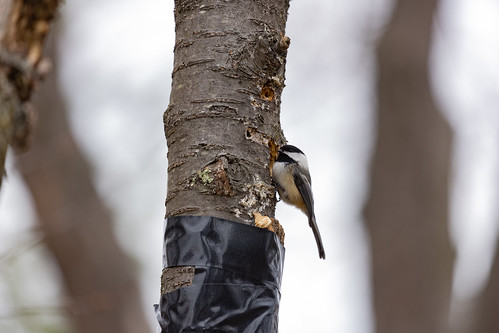 He worked expeditiously while the birds were nearby, and when he walked away, they seemed suspicious of the change for at least a half a minute, but then got back to work, keeping at it all day, until their whole bodies could fit inside, and then until less than half of the tail stuck out the hole as they worked and backed out again. It was fun watching them take turns at this.

This was the classic example of counting your eggs before they hatch or, in this case, before the nest is even constructed. I was figuring it might take another day for them to finish excavating the cavity exactly as they wanted it, and then the female would start constructing the actual nest—unlike woodpeckers and Wood Ducks, chickadees construct a lovely woven nest at the floor of their nest cavity. The male may not help with nest construction, but he plays an important role bringing food to her so she can stay focused on finding soft materials and building. She may need anywhere from 2 days to 2 weeks to finish; she'll start laying eggs a day or two after that. She usually lays 1 egg per day until the clutch of 6–9 eggs is complete.

During egg laying, she may fuss a bit over the nest, adding material, and both the male and female will guard the nest, but she won’t start sitting on them until the next-to-last egg is laid. She incubates usually for 20–25 minute bouts, sometimes as short as 6 minutes and sometimes as long as 60 minutes, and is off the nest an average of 7–8 minutes between, but sometimes returns after just 2 minutes and sometimes stays away up to 23 minutes. During cold spells she stays on the nest longer than average.

Incubation lasts 12–13 days, with the full clutch hatching out within about 12–30 hours, usually in the order they were laid. Parents carry away the eggshells to eat or drop some distance from the nest.

The mother broods the young chicks while the male feeds the whole family. The babies start peeking out the entrance hole 12 or 13 days after hatching. If frightened, they may fledge as early as 12 days after hatching, but if left undisturbed, not until day 16—the longer they remain in the nest, the higher their chances of survival.

So I was counting on at least 40 days of nest watching, bringing me chickadee joy well into late May or even June, but on Sunday morning, the chickadees didn’t come to the tree at all. I figured they must have reached that lower hole and the sudden widening troubled them and they decided to find a safer place. But then they showed up a little before noon, working in short bouts. It was rainy, so that may have changed their focus for the day.

I won't be sure they're using or not using the cavity for a few days at least. If they do move to another site, I'll try to figure out where. Meanwhile, they keep talking to me and coming to my window for mealworms. Who could ask for more?