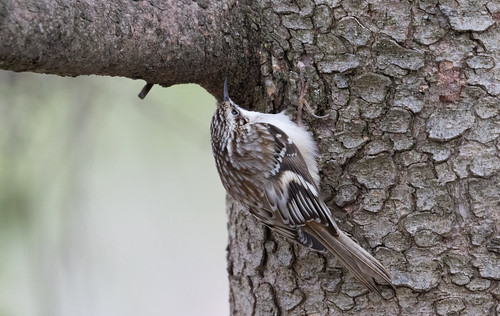 After more than a year of social distancing and being extremely careful to avoid Covid-19, I’ve been going a little stir-crazy. We had a crazy influx of Pine Siskins last fall, along with a nice smattering of White-winged Crossbills and redpolls, but they were just moving through. The big winter invasion happened in a lot of places other than Duluth, and I've seen virtually no finches here at all in 2021. But finally, now that we’re in April, birds, including finches, are starting to appear, every day in bigger and bigger numbers. On Saturday, one lone female redpoll showed up, feeding on the ground with juncos, and on Sunday, I had one lone male Purple Finch. Even better, on Wednesday April 7, a handful of Evening Grosbeaks turned up and stuck around the next day, too, even occasionally visiting the window feeder. Those two days, we had rain and powerful east winds, which blow directly into my east-facing home office window, so my photos are pretty marginal and mostly through rain-spattered glass, but I did get a nice 8-minute sound recording. 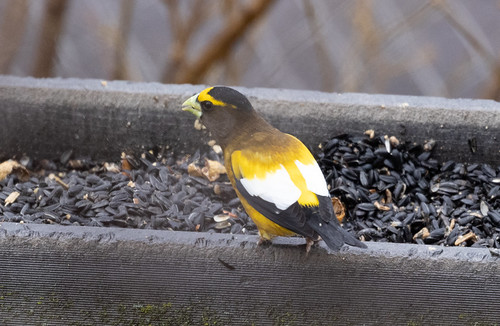 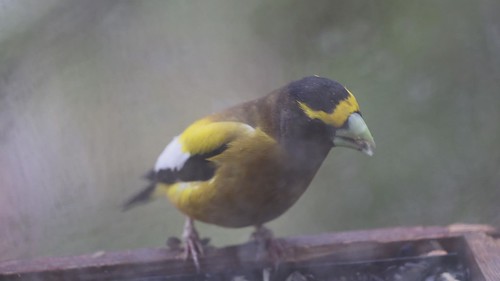 Considering how huge our Fox Sparrow migration was this past fall, I haven’t had many Fox Sparrows yet—the most so far being just four on a couple of days. But even just one male Fox Sparrow sounds wonderfully lovely. I’m back setting my good sound recorder in the yard when it isn’t raining or too windy, and I got a lovely recording on April 10 filled with Fox Sparrow song.  I had a Song Sparrow briefly on the 10th, and 2 or 3 American Tree Sparrows each day since the 8th, but other than that, the only sparrows I’ve had were juncos. A small flock wintered in my neighborhood, and on lucky days I’d see anywhere from one to eight, but starting on April 6, they’ve clearly been migrating. That day I got 15, and day by day the flock has been building until on Sunday I had 50.

I had a single loon fly over on the 5th and the 6th. Loons work their way to Lake Superior and other large lakes little by little as ice goes out. Each morning they make exploratory flights carrying them closer to their breeding lake. If they don’t find open water, they simply head back to the open water where they spent the night. This way, they notice that their breeding lake is open the very morning the ice goes out. Temps have been in the 40s so I don’t usually have my window open and it’s too cold outside to be spending the day in the yard with my 7-month-old Walter, so I’m not seeing many migrating hawks or eagles, though they’ve been going through in good numbers. As of Sunday, April 11, Frank Nicoletti, Erik Bruhnke, and others have counted over 3,200 Bald Eagles and 1,400 Red-tailed hawks passing over their West Skyline Hawk Count area this spring.

The Hawk Ridge counters have tallied almost 3,000 American Robins so far—the males on my corner of Peabody Street are back bickering over their territorial boundaries again. The females will return in a week or so, and what with all the rain we’ve had there will be an excellent supply of mud for nest construction.

Other early migrants that are appearing both in my yard and all over north country include Yellow-bellied Sapsuckers, Northern Flickers, Brown Creepers, Ruby- and Golden-crowned Kinglets, and Yellow-rumped Warblers. 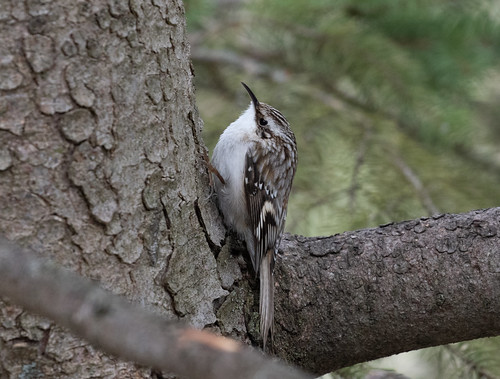 My cardinals are singing every morning now, chickadees are courting, and a Red-breasted Nuthatch pair seem to be nesting somewhere near. My White-breasted Nuthatches had been courting great guns in one of my old box elders, but apparently a pair of starlings booted them out. I have very few starlings, but even just one pair wreaks havoc on the lives of my cavity nesters.

And that’s my early April report. As soon as this rainy period ends, I’ll put out jelly for the first thrashers and catbirds—one Brown Thrasher has already turned up elsewhere in Duluth, and I sure want to welcome my own back. Through the rest of April and all of May, migration will be hopping, and if I have to spend just about every day at home, I want to make the most of it. I’ll be posting photos and recordings on my blog. Meanwhile, I hope you can be enjoying birds wherever you find yourself this spring. Stay safe and well. 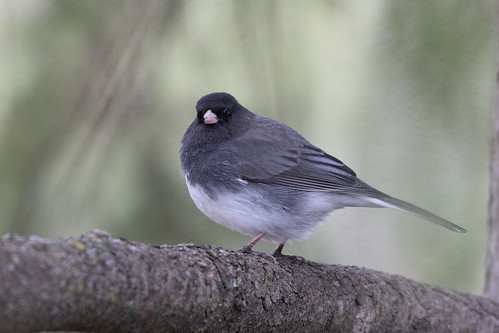