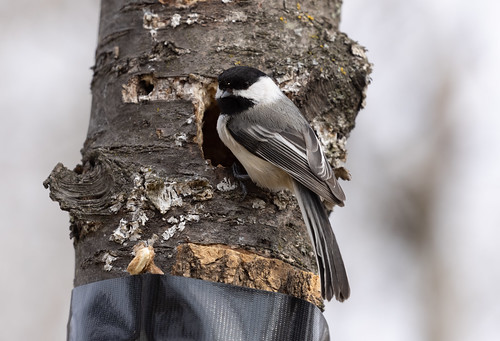 This past weekend, we made a big transition. A week ago, Fox Sparrows were the order of the day. I couldn’t listen out the window or go into my yard without hearing them. By Sunday, I had only one remaining, and it apparently was a female because I didn’t hear a single song, nor hear one on the 3 ½ hour recording I made Sunday morning. Meanwhile, to go along with the handful of juncos remaining and the couple of Song Sparrows I can hear from my yard, Sunday I heard my first White-throated Sparrow.

Downy and Hairy Woodpeckers are doing all kinds of romantic drumming and chasing, and flickers are starting to join them. A pair of starlings seem to have ousted my White-breasted Nuthatches from the box elder where they’d been planning to nest, but the nuthatches are apparently simply relocating to another part of the yard. Studies are starting to show that although starlings are quite aggressive in taking over nest cavities, the cavity builders manage to quickly find or build new cavities, so they aren’t quite as devastating, at least to some bird species, as has been feared.

It’s important to look up into the sky now—geese, loons, Turkey Vultures, and plenty of raptors have been flying over, and depending on where you live, you might see quite a few. Living under Hawk Ridge, flyovers are much better in fall than in spring, but I’ve so far even lucked into a few American White Pelicans.

My dawn chorus recordings have been fun to listen to! (Here's the one from April 18.) Last week I just had a couple of robins—now I can pick out at least four different males singing thanks to my stereo microphones. Any day now, I’ll hear a Brown Thrasher in the mix, and then catbirds, hummingbirds, orioles, and more as the floodgates open. 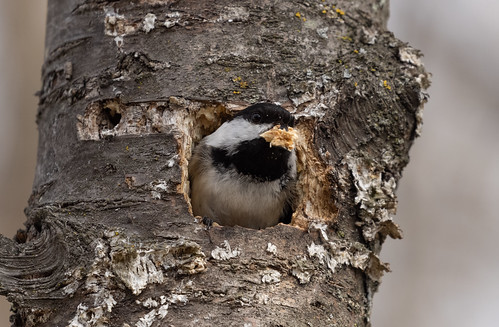 But what is filling me with the most joy right now is the chickadee pair working on a nest cavity in my dead cherry tree. I first noticed them on Saturday the 10th. For several days, I’d see the two of them working hard for a half hour or so every now and then, but they were away from the cavity much more than they were present. But by Saturday the 17th, they were spending a LOT of time at the cavity, and by Sunday they were hardly ever away from it for more than a minute or two when I was paying attention.

It was Sunday the 18th that I finally figured out that I don’t need to look out the window quite so often to keep track of their activities. I set up a trail cam on a large limb of the same tree. It marks each photo and video with a timestamp whenever it detects a bird coming or going. I was hoping to wait to set it up when the birds were busy elsewhere—I didn’t want them to get stressed out. But they really do seem to trust me—when I was on the ladder starting up the cam, one bird was clinging to the nest hole a foot from my face while the other was in a very nearby branch. They were both back to excavating even before I got down, much less carried away the ladder. I’m going to end up with a LOT of data and cool photos and videos from these birds! 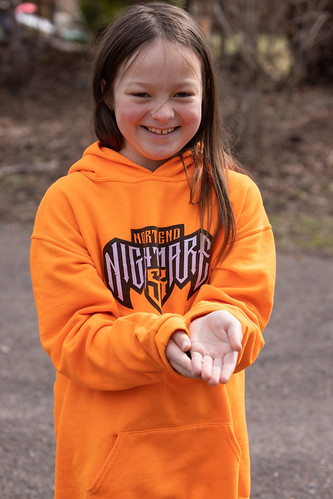 Sunday, one of my favorite people in the known universe, a girl named Eden who lives across the street from me, was walking by with her dad Sam when she noticed them coming and going. The birds were excavating furiously, zipping into the hole to chip away at the wood enlarging their nest chamber, and seconds later, flying out with a mouthful of wood bits to spit out from one of my lilac bushes or the maple tree across the way, and then zipping back to the cavity and repeating. Eden was standing under the tree when one bird spit out the wood bits—she held up her hand and caught one! I of course had to take a photo. 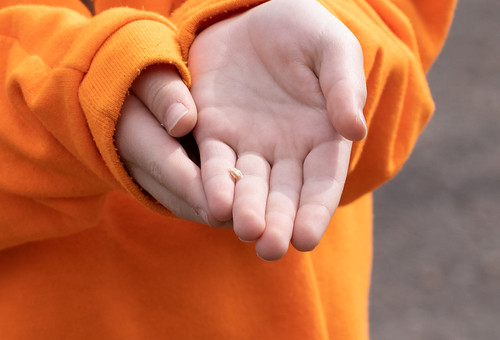 I’d been telling Eden how unlike woodpeckers, chickadees build a nest inside the cavity, and they use soft animal fur. Not an hour after she left, she was back with her brother Henry and a little bag full of soft dog fur from her dog Ranger. I put one small clump in a clean suet feeder filled with other nesting materials, and kept a larger chunk of it that I’ll offer in the window feeder when the chickadees start building—at this point they’re still excavating.

I’m hoping against hope that everything works out for this little pair. As long as they keep at it, I’ll be regularly posting photos and videos on my blog. But as the old saying doesn’t quite go, “Don’t count your chickadees before the eggs are even laid.”