Spying on the chickadees nesting in my dead cherry tree turns out to be trickier than I expected. I keep a trail cam trained on the entrance hole 24-7, swapping out the memory card and checking the photos every two days, but chickadees can come and go quicker than trail cam technology can freeze the action. I think most of the time the motion detector notices them, but there’s a split-second time lag between the motion sensor detecting movement and the camera shutter taking the first photo, giving a chickadee plenty of time, if it’s returning to the nest, to be entirely or mostly in the hole before the photo gets taken, or if it’s heading out from the nest, to be out of range of the camera by the time the first picture is taken. Once in a while, though, the chickadee will alight at the entrance for a second or two or look out the entrance hole for a bit before taking off—those are the photos my cam gets.

I know it’s missing a lot because every few days, I was setting out a good camera on a tripod and making half-hour videos. That doesn’t miss a moment, and explains why even after the chickadees had started producing and then incubating eggs, they were fine-tuning the entrance hole—it’s so perfectly smooth and round that half the time they don’t alight at all—they just bullet straight in. Sometimes the chickadee within looks out for a bit before leaving, but stays inside the entry. From the angle my cam is set, it can’t detect any movement until the head actually emerges.

I was watching the birds excavating—going into the hole and carrying out big mouthfuls of wood chips—through April 22. The only day I actually saw them carrying in nesting material was April 23, and then it snowed on the 24th. There was much less activity at the nest, and on April 28, I watched a starling investigating the hole. I started thinking the chickadees had abandoned ship. But that must have been the point at which they were producing eggs. A chickadee lays one egg a day, and doesn’t start incubating until the second-to-last egg is laid so all the babies will hatch out together. I of course had no way of seeing into the nest to know what was going on inside.

I have to stand at the window in my office to see the nest, but wasn’t usually seeing activity. When I did start seeing more activity at the nest late last week, I thought it might just be lucky timing. Just to see for sure what was happening, on Saturday afternoon, I set up my good camera to catch a bit of video.

And when I checked it out, lo and behold, one of the parents was carrying in a tiny green caterpillar into the nest! That’s when I knew baby chickadees had hatched. I’d made that video in midafternoon. Sunday morning, I thoroughly I checked the cam footage, and sure enough, the first cam shot showing a bird carrying food into the nest was Sunday at 1:31 pm. 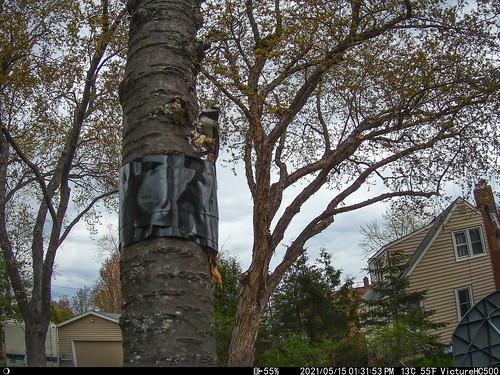 So thar be babies! Only once did any of the grubs I’ve seen in the stopped video or photos look like it might have been a tiny mealworm—all the others have been green, very soft caterpillars, and exceedingly tiny. I’m eager to see how things change as the babies grow and spring advances, making larger caterpillars available.

The tiny, tiny insects emerging on newly opening buds are the ones that fuel warbler and vireo migration and are essential for new baby songbirds. Growing native plants and not using insecticides except for spot spraying as a last resort is essential if we want to keep our tiny songbirds well into the future. Just looking at that little hole in a dead cherry, I’m finding myself more heavily committed to environmentalism than ever. Holding my grandson and imagining these tiny hatchlings that can’t be seen but are as warm alive and dependent as baby Walter gives me a renewed sense of my obligation to keep this world safe for babies.