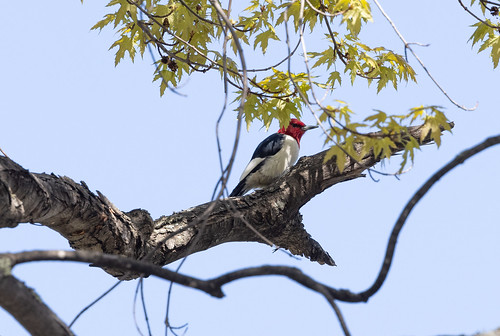 On Sunday, May 16, I was talking to my friend Erik Bruhnke on the phone and gazing out the window when what to my wondering eyes should appear but a Red-headed Woodpecker. Lots of male woodpeckers have conspicuous red on their heads, and in the Pileated Woodpecker and Red-bellied Woodpecker, both male and female have a lot of red on their heads. But in only one woodpecker species do both the adult male and female have a completely red head, from the face to the crown, and from the throat to the nape—just one solid red head. Luckily, that is the woodpecker named for that feature. The body of the Red-headed Woodpecker is black and white, with absolutely no spots or speckles or stripes—the bird’s entire upper back, most of the tail, and the upper and outer wings are solid black while the lower back and rump, entire underside, and inner, lower quadrant of the wings (where the secondary wing feathers are) are purest white. The white on the wings and rump stand out both when the bird is in flight and when it is perched with the wings closed. So there was no mistaking this bird. I told Erik, “Gotta go—Red-headed Woodpecker!!!” and hung up.

I ran for my camera and charged outside, but the bird kept its distance. I saw it a few more times that day and got a few photos, but never got any closeups.

The Red-headed Woodpecker was the very first woodpecker I ever saw—#20 on my life list when I saw my first near Baker Woodlot at Michigan State on May 3, 1975—and I saw them a lot in both East Lansing, and then in Madison, Wisconsin. They were quite common in the Midwest in the 70s, so I'm afraid I took them for granted, but the population has always fluctuated dramatically. Historically, Red-headeds profited mightily from both chestnut blight and Dutch elm disease, feasting on the insects that in turn were feasting on the dead and dying trees, and also using the dead trees for nesting.

But even in the 70s, Red-headed Woodpeckers faced plenty of problems, too. They fly between stands of trees in a swooping flight pretty much precisely at windshield height; car collisions certainly contributed to their decline. Thanks to their abundance, their dramatic plumage, and the magnitude of the problem, I recognized a lot of their mangled bodies on roadsides during the 70s, and less so during the 80s, as there were fewer left to be killed. European Starlings have also posed a serious problem, aggressively appropriating their nest cavities.

Over their entire range since 1970, the cumulative decline of Red-headed Woodpeckers has been about 67 percent. In some parts of their range the decline has been fairly  small, and in parts of the East and the Plains, they’ve actually increased. But their losses have been scary in the Upper Midwest, most especially in Minnesota. Since 1967, Minnesota’s population has suffered an annual decline of over 6 percent, representing a cumulative loss of 95 percent since the Breeding Bird Survey began.

The authors of Minnesota’s superb Breeding Bird Atlas conclude that habitat loss is probably the root of their problems here, noting that the oak savanna habitat where Red-headed Woodpeckers are most found in Minnesota is located in the deciduous forest belt extending from southeastern part of the state to the Park Rapids area, precisely where the human population is densest, and the problem is growing as communities outside the Twin Cities continue to grow and expand outwards. In one Subsection, the oak savannas that comprised 54 percent of the region’s habitat in the 1890s were reduced by 1990 to less than 1 percent.

My Red-headed Woodpecker never came close enough for great photos, and had vanished by the next day, as many outliers during migration do. With the heavy clay soil of my neighborhood, oak trees just aren't part of the local habitat, so I feel lucky that it stopped even for a short while and allowed me to take a photo, even a distant, highly cropped one, as a memento of a wonderful day.