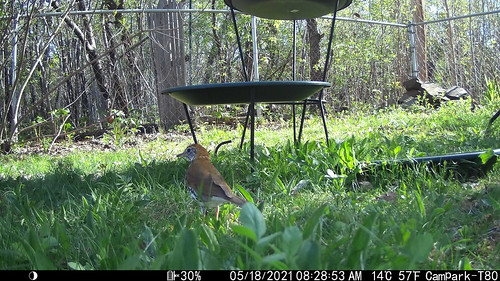 One of the many highlights of having an apartment in Ithaca, New York, when I was working at the Cornell Lab of Ornithology, was being able to hear Wood Thrushes just about every day in spring and early summer. The song is splendid—rich and fluty, a spectacular example of what the supremely evolved avian syrinx is capable of.  We mere mammals have a simple voice box, more properly called our larynx, which is a set of muscles set within our trachea. We may be capable of a variety of vocalizations, but except for some gasps and wheezing sounds, we can only vocalize as we exhale, and cannot harmonize with our own voice in real time. Birds have a song box, their syrinx, where the trachea branches into two bronchial tubes. The muscles span the trachea and both bronchial tube branches, so they can produce completely different sounds simultaneously. Also, birds can produce and control sounds both as they inhale and exhale.

Thrushes have an extremely complex syrinx, which is why for a long time many taxonomists placed them at the very end of checklists—they thought that avian evolution reached its pinnacle with the most complicated syrinx. And listening to the luscious tones of a Wood Thrush, it’s hard to argue. The three-parted song begins with soft, almost inaudible notes, then rises to the flute-like ee-oh-lay, and ends with a complex, high-frequency trill. Each bird sings unique versions of each song part; individual males may sing over 50 distinct songs. 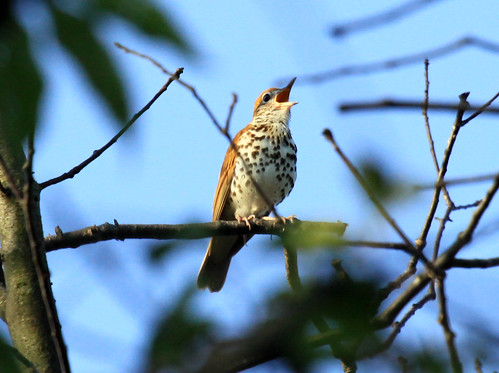 Wood Thrushes nest in deciduous and mixed forests from easternmost Texas, Oklahoma, Kansas, and Nebraska through all of Iowa, much of forested eastern Minnesota, and even up the forested bottomlands of the Missouri River through South Dakota; the range extends east to the Atlantic coast from New Brunswick and Nova Scotia south to northern Florida.

But the Wood Thrush population dropped a full 60 percent between 1970 and 2014. As forests are fragmented by harvesting, urbanization, road cuts, power lines, and other development, cowbird parasitism increases, along with predation by domestic cats and natural edge species such as Blue Jays, crows, and raccoons. If all that weren’t bad enough, we’re discovering that they’re also suffering from thinning eggshells, which has been linked to acid rain. Acid dissolves calcium, leaching it from the soil, reducing what's available for the invertebrates Wood Thrushes eat for their own calcium supply. In particular, ground snails, a staple of the Wood Thrush diet, have been dwindling where acid rain is a problem.

So Wood Thrushes have disappeared from marginal habitat and are growing less common even where good habitat remains. The Minnesota DNR designated it a Species in Greatest Conservation Need, and the Wisconsin Bird Conservation Initiative calls it a species of State Special Concern.

In the 40 years I’ve lived on Peabody Street in Duluth, I’ve never ever seen or heard a Wood Thrush from my yard until just last week. On May 18, when I went to the backyard to get my recording equipment at 8:48, I was thrilled to hear the exquisite song. It was singing in the tiny woodlot behind my yard, so instead of bringing in my recorder, I moved it to a better spot, and made a 3-minute recording before a neighbor started talking on a cell phone—that wouldn’t have sounded good on a natural recording even if the bird kept singing, but it quieted down. I had run in to get my camera, but only got a momentary glance at the bird. That night when I went through the photos on my nest cam, imagine my delight to have captured a photo to go with this recording. 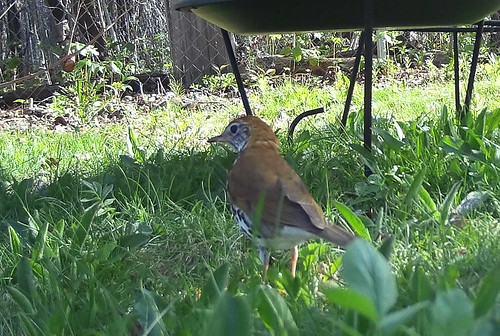 When a wonderful bird shows up during spring migration, it’s fun to see it as a hopeful sign. But even if it’s just one bird who took a wrong turn at Lake Superior, it’s still a gift. This one brought my yard list, the list of birds that I've seen or heard when either I or the bird was touching my property, up to 171. That’s just a number. Statistically, I’m averaging slightly over 4 species per year, but this is not the kind of situation in which the numbers are evenly distributed over time—I added over half of those species in just the first two years I lived here. But thanks to the pandemic, this is the third new yard bird I've added in 2021—I had a calling Wood Duck fly over on April 20, and on January 10, I finally saw a flock of Common Goldeneyes fly over. Ducks obviously don't nest in my neighborhood, but I’d bet over these 40 years, plenty of different species have flown over, so you’d think over all these years I’d have noticed these two common species before now. It’s also quite likely that Wood Thrushes have visited my yard before this, and even sung away of a mid-May morning. But this was the first I’d ever seen or heard one here, and it’s made me very, very happy.