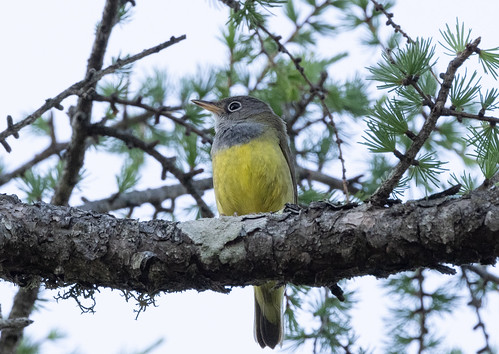 Most North American warblers have populations well into the millions. The very most abundant two species are the Tennessee Warbler with 110 million, and the Yellow-rumped Warbler with 170 million. Several more number more than 10 million: the Ovenbird, Northern Waterthrush, Black-and-white, Orange-crowned, Nashville, MacGillivray’s, Mourning, Magnolia, Blackburnian, Yellow, Chestnut-sided, Blackpoll, Palm, Pine, Townsend’s, and Wilson’s Warblers, Common Yellowthroat, American Redstart, and Northern and Tropical Parulas, though the Tropical Parula’s breeding population within the United States is only 5,000 of the 20 million found in Mexico through Central America, Trinidad and Tobago, and northern Argentina.

A few warblers have very restricted breeding ranges. The Golden-cheeked Warbler breeds only in Texas—not one other state and the breeding range does not extend even slightly into Mexico, either. And historically, at least as far as ornithologists know, Kirtland’s Warbler bred only in an area of the Lower Peninsula of Michigan, but as its population grew thanks to Endangered Species Act protections, it’s spread into the Upper Peninsula and nearby Ontario, and then to northern Wisconsin. 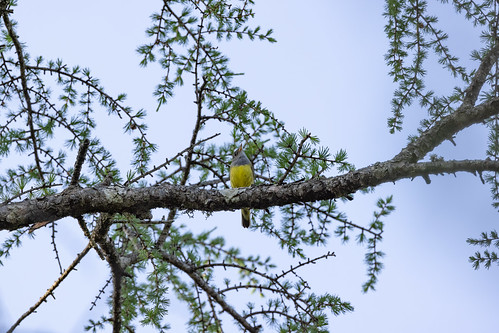 Within the United States, the Connecticut Warbler breeds only in northern Minnesota, Wisconsin, and Michigan. In the States, the breeding population numbers about 50,000, but its range extends into central Canada, where it totals 1.8 million. All of those birds have to pass over the United States to get to their breeding grounds, but they’re still much, much rarer than most warblers.

When I moved to Minnesota, I’d already seen Connecticut Warblers a few times during spring migration. Visually, they’re like a needle in a haystack—you have to look through a lot of much more abundant warblers to pick one out, but fortunately, most of us birders don’t need to rely on our eyes. Connecticut Warblers have one heck of a loud song that is well within the frequency range I still hear easily, and they mercifully sing during migration, too. Quite a few times over the year, their loud song has alerted me to one in my own backyard, sometimes even when I’ve been indoors with the windows closed. It’s random chance to be paying attention right when a stray migrant happens to be nearby in May—nothing we can count on. But we can count on Connecticut Warblers setting up their breeding territories in bog country up here, making it relatively easy to find them during their morning singing bouts at the Sax-Zim Bog. The bog is a huge place, but recognizing black spruce-tamarack forests with a rich understory of sphagnum moss, Labrador tea, and swamp laurel, we can drive with our windows open through appropriate habitat if we can brave the mosquitoes. Even if the bird is well away from the roadside, its song carries quite a distance. This year, one Connecticut Warbler set up his territory in a very easily accessed spot, making him what birders call a “stake-out.” I checked him out last week. I arrived at 7 am, an hour later than I’d wanted, but he was singing so loudly that I heard him a quarter mile before I reached the spot, and he never stopped singing during the 45 minutes I was there. I came armed with my Zoom H6 recorder and my camera, but unfortunately, I’d forgotten to put the memory card into the recorder, so it ended up being worthless. I did have my cell phone, with a built-in app called “Voice Memos.” The recordings it makes are compressed and not nearly as good as those made with my Zoom, but any port in a storm—that’s what I used to make the recordings featured on my website's Connecticut Warbler page. I lucked into a perfectly still morning but had to be pretty close to get a clear recording. To do that I put on rubber boots to get over the roadside ditch, and then I simply worked my way closer and closer to the bird. I love standing on spongey sphagnum moss. I was as unobtrusive as possible, and the bird didn’t change song perches very much, but it took a while for me to see him, and even longer to get myself in a position where I could take photos—and he stayed up high so they were all pretty backlit. Connecticut Warblers sing both to attract a mate and to declare and defend their territory against other males. Don Kroodsma, an authority on bird vocalizations, believes they sing all night long when they arrive on territory in May in hopes of attracting a female flying over during nocturnal migration. By dawn, as females have settled down for the day, there is less chance one will be close enough to notice any given male. I didn’t see a female, but that doesn’t mean one isn’t there—I was entirely fixated on the singing male, and a female would have had to alight either in my face or right near him for me to notice.

Connecticut Warblers are often described as shy and retiring, but I suspect that they’re simply rare and stay within their habitat—as I said, mine kept singing from the same perches even when I was right beneath him. Sometimes birders resort to playing recordings to get stake-out birds to sing. I don’t approve of that, but even if I did, it was utterly unnecessary. I didn’t have good light and my recordings were not as good as they’d have been had I made sure to put a memory card in my recorder, but even if my technology ended up not what it could have been, that lovely little bird more than made up for it, and this was a morning well spent.