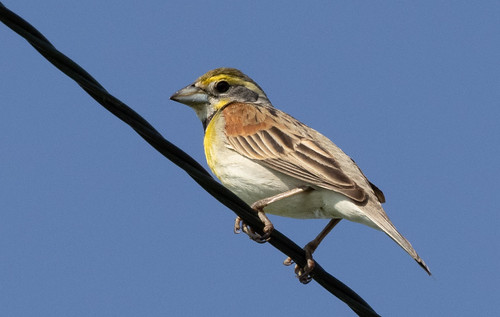 I spent Tuesday morning birding in Port Wing, Wisconsin. On the way home, I stopped at a lovely birding hotspot called the Roy Johnson Wetlands. I heard one Le Conte’s Sparrow singing and added a new species to my Douglas County list—a Dickcissel. That’s the furthest north I’ve seen them in the state. 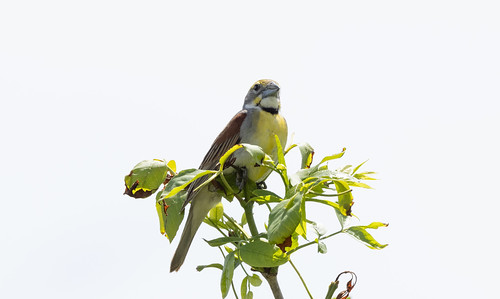 Dickcissels are a prairie species, found mainly in the middle of the continent, but sometimes turn up in large numbers in unexpected places. This seems related to serious droughts in the center of their normal range.

Southern Minnesota and Wisconsin are part of where Dickcissels are found every year. I got my lifer at Governor Dodge State Park in Iowa County in the Driftless Area of Wisconsin east of Madison way back in 1977, and over the years I’ve seen some in Dane and Columbia Counties, too. I’ve had several sightings in places Iowa and Oklahoma, but the only one I ever saw in northern Minnesota was at a feeder up the shore back in 1988, which was an extreme drought year in the plains. The biggest irruption of Dickcissels into Minnesota, bringing birds into every county except Cook, was in 2012, another extreme drought year.

I don’t know if the drought conditions in the West are contributing again, but this year, Dickcissels have been turning up in many places in the Northland. I was thrilled about my Douglas County bird, but when I got back to my car, I had a text message from a Duluth birder saying he’d found over 40 in northern Carlton County in Minnesota. So mine one lone individual was apparently not that big a deal. 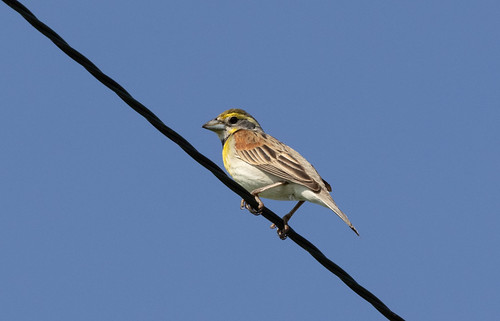 On Thursday morning, I went to the Sax-Zim Bog. I was mainly wanting to record and photograph a staked-out Connecticut Warbler (a “stake-out” being a cool or unusual bird that sticks around for several days in the same spot). After spending an hour with that lovely thing, I made a few more stops on Arkola Road, and that’s where I found the Dickcissel. Birders told me they’d seen more in other fields, too. So 2021 is turning out to be a great year to see a Dickcissel in the Northland. Because their being up here is so unusual, evidence of breeding is worth documenting and reporting to eBird and to the Wisconsin Society for Ornithology or the Minnesota Ornithologists' Union.

Dickcissels have enough bright yellow beneath with a black band around the throat that from the front, they look a bit like a smallish meadowlark with a very stout bill. For a while, they were placed in the blackbird family with meadowlarks and Bobolinks. Their relationship to other birds is still uncertain, but ornithologists currently place them in the family Cardinalidae. 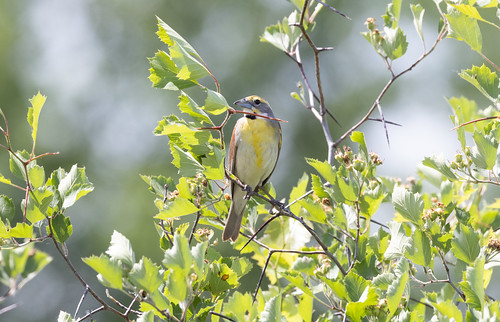 When they’re around at all, they’re pretty easy to find in overgrown pastures, savannas, and croplands. They sing their short, distinctive song over and over, and when you notice it, it’s not usually hard to find the singer. They sometimes sing from shrubs and shrubby trees, often at the very top. Even more conspicuously, they very often sing from fences, posts, and powerlines, and they don’t seem very shy when we point a camera or microphone toward them. (You can listen to the one I saw in the Roy Johnson Wetlands here.) 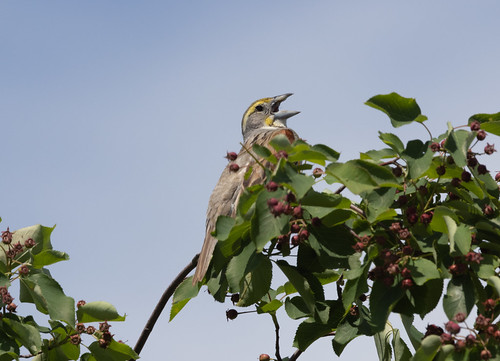 In winter, when Dickcissels gravitate to the llanos of Venezuela, they are entirely granivorous. During the breeding season, when they need much more protein, their diet becomes about 2/3 insects, especially grasshoppers, caterpillars, termites, and flies. As they stoke up before and during fall migration here in the states, they’re still consuming plenty of insects—at that point, their diet is about 1/3 insects. They forage on the ground where they’re hard to watch, so are easiest to find and see during the time when males are singing, mainly throughout June and the first half of July. They’re territorial during nesting, but once their young become independent, the birds become gregarious, joining large flocks.

In the same fields where I saw one in the bog and at the Roy Johnson Wetlands, I also had plenty of Bobolinks, Eastern Meadowlarks, Red-winged Blackbirds, Sedge Wrens, several sparrows, and other cool birds—I ended up turning my back on the Dickcissel in the bog when a Black-billed Cuckoo distracted me. So a search along country fields for Dickcissels is pretty rewarding no matter what. We Northlanders don’t usually get to see them at all, so during this exceptional year of plenty, it’s a good idea to get out there and enjoy them. 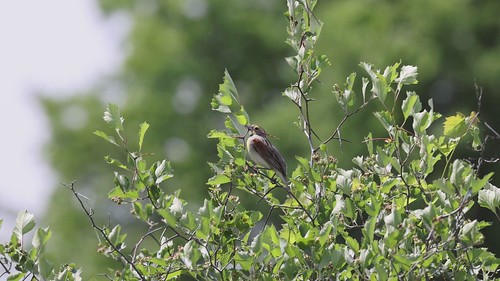