Hot Summer Birding: A Look Back 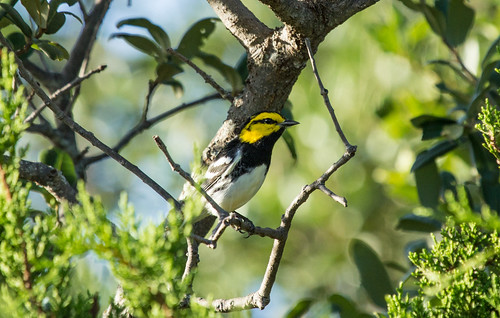 In 2013 when I did my Big Year, one of my goals was to see all the warblers that breed regularly in North America. Most are Neotropic migrants that are here in the United States only for the breeding season, and the rarest ones have very breeding restricted ranges. If you’re not in the right place at the right time, you miss them. Due to several constraints and some poor planning, It wasn't until July that I saw some of my most wanted warblers, species that would have been much easier to find in April and May.

The Colima Warbler is a case in point. The only place to find it in the U.S. is in Big Bend National Park. Smart birders go there in late April to see the warblers soon after they arrive, when they’re singing most frequently and the weather isn’t too hot yet, but I didn’t get there until July 20. The most reliable and accessible place to see them in the park is about 6 miles up a fairly steep trail from the trailhead where the park’s lodge is. People told me to start the hike at 2:30 or 3 am, using a flashlight in the dark, so I’d be reaching the part where the warblers are at first light and could be back before it got dangerously hot. Some of them mentioned that birders should always hike that trail in groups to minimize encounters with mountain lions.

That lodge was the most expensive place I stayed during that entire year, and I needed to stay there both the night before my early start and then when I got back so I could crash after the 12-mile full hike. But I got up at 3 am to a crazy thunderstorm and went back to sleep. When my alarm went off at 4 and again at 5, lightning, thunder, and the downpour were still intense. I stayed up at 6 and at 7 moseyed to the lodge restaurant for breakfast. By the time I finished, I was pretty sure the lightning and thunder were finally over. The rain was still steady, but not what I’d call a downpour anymore. I figured I’d have to stay a third night to do the long hike the next day, but since I didn’t have anything better to do that day, I decided to take a short walk in the rain to see what the trail would be like. It was already 9 am, and I was only going to walk a short way, so I wore my rubber boots rather than good hiking boots, brought just one small water bottle, and left my backpack with my first-aid kit behind. I of course brought my binoculars and camera, but in addition to the camera’s rain guard, I wrapped it in a plastic bag. The rain was still heavy enough to require an umbrella.

I didn’t get more than a quarter mile up the trail before the rain lightened to a steady drizzle. The temperature was very comfortable—under 70—so I kept walking. In the drizzle, I heard virtually no birds singing, but the scenery was lovely. I wasn’t paying much attention, but suddenly I saw the sign marking the start of the stretch officially called the Colima Trail—I’d already hiked 6 miles! And at that very moment, the rain stopped and instantly a bazillion birds started singing. I managed to pick out a Colima song in time to point my binoculars at the soaking wet bird sitting on an oak branch. I dropped the umbrella, shook off the water from the plastic bag around my camera, and untied it. But by the time I could pull the camera up, the warbler had flown. I was sad that I didn’t get a photo, and I didn’t see or hear another one, but felt wonderfully triumphant that I got it at all. I’d not have to spend the time or money staying in Big Bend a third night. 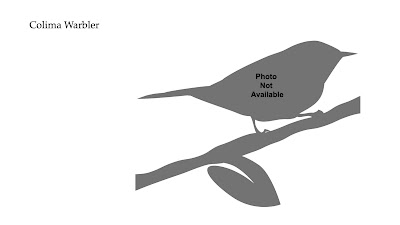 At that point in the loop trail, it was going to be 6 miles back to the lodge whether I backtracked or forged on. Either way, it would be downhill, so I kept going. Bird song ebbed rather quickly after the rain stopped, but it was a beautiful walk. About 2 miles before I reached the end of the loop, a large brown animal crossed the trail less than 20 feet ahead of me. I took it in piece by piece—the enormous cat-like head, the long, lanky body, the long, long tail. I never had it entirely in view—the trail was too narrow to fit it all in as it raced across. By the time my brain had even processed that I’d seen an adult mountain lion, it was gone, leaving me all the thrill and none of the fear, at least for about 15 seconds.

Then I started thinking. Hmmm. If it could run through the dense underbrush without my hearing a sound, imagine if it had been stalking me from behind. For a few seconds I wished I'd brought the little mirror that I have on my bike helmet, but then I thought, stupid, what on earth would I do if I did see one coming up behind, except maybe get a quick photo that I’d never get to enjoy. But then I thought, well, at least it would be quick. There are way worse ways to go than to be killed by a mountain lion in this beautiful place. By the time I arrived safely at the lodge, not a single blister on my feet despite wearing simple rubber boots on a 12-mile hike, and not a bit sweaty—the temperature never did get above 70 that day!—I was thinking what a great story this day made. At the Big Bend gift shop, I bought a little picture of a Colima Warbler and a much larger poster and a little stuffed animal version of a mountain lion. That seemed about the right balance. 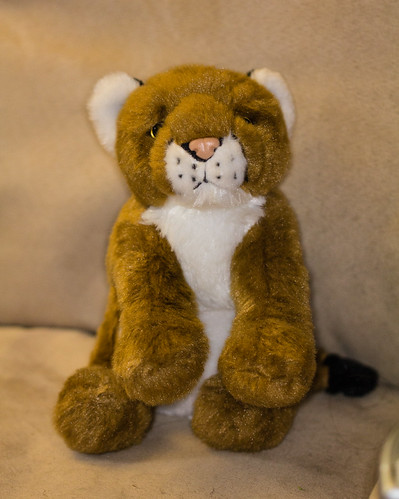 It wasn’t until late on a hot afternoon two days later, on July 23, that I arrived near Austin, Texas, to try for another extremely rare and tricky warbler. The Golden-cheeked Warbler nests only in central Texas in old-growth and mature second-growth juniper-oak woodlands, and winters in montane pine-oak in Mexico. The habitats Golden-cheeks need for breeding are climax communities that may take decades to recover from disturbance, and their range is under intense pressure from development. It’s not too hard to see one from mid-March through mid-May, during the peak of their singing, but I’d never been in the right place at the right time to see one there before. (I had seen my lifer in Guatemala in February 2007.) My friend Heidi Trudell, who put me up overnight at her house close to Big Bend before I looked for the Colima Warbler, had the scoop on the easiest place to find a Golden-cheeked Warbler—at Balcones Canyonlands National Wildlife Refuge. I arrived in Austin at the hottest point in the afternoon on the 23rd. My plan was to head to the refuge first thing the next morning, but since was I nearby, I figured it wouldn’t hurt to scout it out ahead of time. 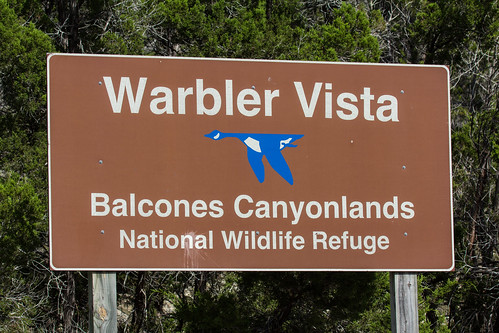 A bright male flew across the road as I approached the refuge entrance, giving me a good enough look to count it, so I could have turned around right then—mission accomplished!—but I headed to the parking lot which was of course empty except for my car. I opened the car door to what seemed like an oven—the temperature in the parking lot was 110 ºF. Clearly this was a worst-case scenario, but what the heck—this was a new adventure, so I walked the trail loop where they were supposed to be easiest to find. 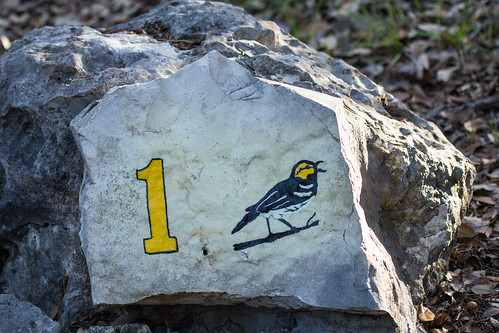 The trail has beautiful, numbered rocks that serve as markers corresponding with numbers on the trail guide—a Golden-cheeked Warbler was painted on each one. As I trudged in the heat, I started thinking that those painted warblers would be the only ones I’d see on the entire trail, and sure enough, they were.

When I got back, the parking lot was even hotter than when I’d arrived, and my car felt lethally hot, so I opened all the windows and the hatchback and walked around the wooded perimeter a bit. Well, I started to, but suddenly a family of four Golden-cheeked Warblers was right there in front of me. I got several photos before they wisely retreated somewhere I could at least hope was a little cooler. 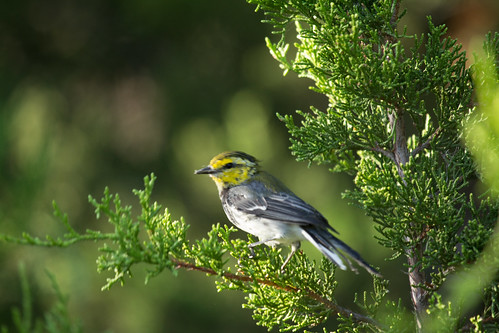 So that’s how on my Big Year, I got some of my best warblers at the wrong time of year. You can’t count on luck, so I did a pretty poor job of plotting out my Big Year, but then again, you can count on birds being out there even if they’re starting to quiet down for the year. And the only way to find them is to look. 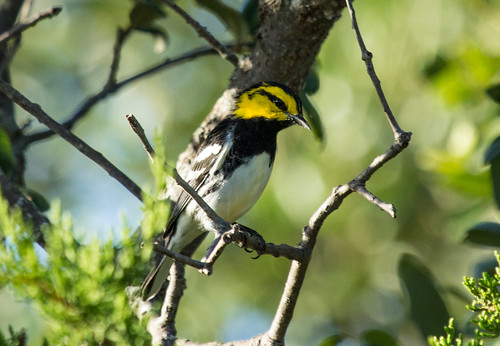